A Mixed Bag and Probably Not for Us

Preliminary Review of Napoleon At War by Ángel Saquero Hernández 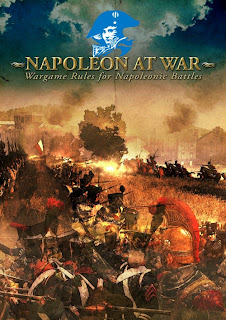 A disclaimer before I begin. This is only a preliminary review of these rules. I am the only one at the ANF to have read them to date and we have not used them in a game. While not ideal, I decided to post this review as I cannot see us using the rules in a game in the near future, mainly because of our focus on games for the remainder of the bicentennial years.
Napoleon at War is based on the premise that a "game" (and it is very much a game) should conclude in six turns. This indicates the market at which these rules are aimed, namely those who need to conclude a game in a single evening, which is, I suspect, the majority of wargamers?!!
Despite being fast play rules, there do seem to be reasonable mechanisms for most key aspects of Napoleonic warfare. Familiar concepts like unit quality, basic formations, higher level organisation, determination test, élan test, morale test and cavalry opportunity charge are all present. Many ideas are lifted from previous rules and, as usual, there is no attribution or recognition of this ‘heritage’. In fact Hernández goes as far as to say “we have established the concept of command and control” (p. 43); hmmm...!
As with all sets these days, a lot of effort has gone into the graphic design to produce an attractive book. It is also quickly evident that they have been designed to sell boxes of the miniatures produced by the company (a common bit of vertical integration by the writers of wargames rules). I was interested, and surprised, at the use of photos of a handful of re-enactors to ‘decorate’ the text rather than pictures of miniatures in actual wargames. Certainly not my preferred option. Overall though, I found the book to be written in a friendly, conversational style and one which sets the tone of the rules and the expectation of how a game should be played.
A fine feature of the rules are the many, clear and well explained diagrams to illustrate key concepts and covering many examples. Perhaps the cleverest mechanism is the concept of valeur and discipline for morale and training ratings respectively. This enables the esprit de corps and quality of troops to be determined separately. It is however not a new concept, having featured, under different names, in many sets in the past including Quarrie and Empire.
Firing seems to be quite a good system, with increased chances if from a full strength unit, improvement with troop quality (which is somewhat debatable, but commonly used in rules). Losses are used to impact morale and effectiveness. ‘Odd’ losses are not ignored, but are attributed through a saving throw. Once again though there are rapid fire casualties.
Several aspects leapt out at me as bizarre and/or unrealistic when I read the rules. Chief amongst these is the movement. Movement is not done as units as a whole, but is conducted, DBx-style, by moving the command stand and then other stands forming around it. This allows completely unrealistic sideways movements and far too much flexibility of movement. Other mechanisms that did not sit well with me are compulsory firing even if disadvantaged (included for fast play?), cavalry being able to withdraw from small arms fire and compulsory counter-battery fire.
The rules also feature an ‘interesting’ take on rallying. This is based not on retreating or broken units, but a recovery of combat losses (although, since reading these rules, I have seen the same mechanism in Fields of Glory). To me this does not seem the most realistic way to portray higher level morale in a battle game/simulation.
I began this review with a disclaimer, or more of a confession, that I have gone against my own principles and written a review of a set of rules that I have not yet used. However, I am more confident in my assessment, in the absence of playing a game with the rules, after having read some reviews by others.
For example Sgt Steiner who concluded after their playtest “all in all I enjoyed the game rules but not sure they are sufficiently better than Lasalle or Field Of Battle to draw us back to them certainly not with army lists as currently supplied.” Or John and his Band of Wargame Brothers who have tested them twice and found that “they are fast, bloody, not too complicated and produce an enjoyable game.” Also, Torbjorn Blom who has “not been playing Napoleonics before because of they tend to be rule heavy and slow paced Napoleon at War is changing this and I hope that it will be as success full as Flames of War”.
This comment from “Superdude” on TMP (11/8/11) probably sums up why they will be ideal rules for many wargamers, but are unlikely to be a set that we’ll use beyond a single playtest: “they are just what (I) want out of a napoleonic game. I have a feeling nap heads will find them lacking. Bit like the die hard WWII players with FOW. But for me I have found the set I am happy with. I was almost settled with BP and/or Lassalle But now I think I will stick with these.”
Posted by James Fisher at 21:27