This booklet, about the campaign and battle of Leipzig, the Battle of the Nations, is a ripper. The French text is sufficiently ‘accessible’ that I, with my intermediate grasp of the language, was able to understand it. However, there is sufficient content that requires no translation—numerous maps, plenty of pictures and full, detailed orders of battle for both armies—which makes it ‘accessible’ to the non-French speaker/reader too. 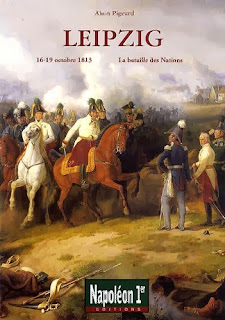 The maps in this booklet are numerous, clear and in colour. There are maps showing the strategic situation on 13th October 1813, the area around Wachau on 16th October, Möckern area 16th October, Leipzig area 18th October, detail of Leipzig on 19th October and the pursuit after the battle up to 30th October. All of the maps show positions of key forces (at the appropriate scale), arrows of key movements and a goodly number of towns and geographic features. They are the sort of maps that we expect and need as readers and wargamers, but that are so often missing.

Plenty of clear pictures fill the pages of this booklet. In fact, there is at least one picture on every page; my kind of book (ha, ha!). There are reproductions of paintings of the towns and battlefield, key people and battle scenes. These are complemented in the last chapter with photos of sections of the battlefield today. Most of the pictures are in colour and fill from about half a page to a two-page spread. For example, the complete painting of Schwarzenberg reporting victory to the three allied monarchs, shown on the front cover above, is reproduced in the booklet as a two-page spread beneath text. The paintings of the battlefield and battle scenes were of great use to us (well, Julian actually) in designing buildings to represent Leipzig and the numerous out-lying towns.

Importantly and usefully, the last 12 pages of the book comprise full, detailed orders of battle (OBs) for both armies. The OBs provide corps, divisions, brigades and units. Strengths are provided for every corps and numbers of battalions or squadrons for each unit. These figures are complimented by tables of the strengths of various corps that are given at the end of the OBs and in tables presented with relevant sections of the text. The names of the commanders of each corps, division and, in most instances, brigade are also included. The OBs are invaluable and I used them, together with Nafziger’s, to compile the ones that we’ll use for our game of this grand battle (now planned for next year).

For those who do read French, the text is a descriptive and an interesting read. Pigeard sets the scene for the great battle with chapters describing the events that lead to the campaign in Saxony in 1813 and the initial spring campaign, with its partial successes for Napoleon’s armies, up to the armistice. He quotes Jomini observation of the latter event “...the greatest mistake that Napoleon made in his entire career as commander in chief” (p. 8). Pigeard then outlines the actions following the resumption of hostilities, the victories of Napoleon and defeats of his marshals that brought the armies together around the city of Leipzig. The features of the battlefield are described in such a way as to facilitate translation to a miniature table-top. Twenty-nine pages are dedicated to a detailed description of the four days of the battle. The booklet concludes with the manoeuvres following the battle, up to the end of 1813, and the battlefield today.

I enjoy most books about the Napoleonic period, but every now and again I come across a real gem. This is one such book. My copy of this tome is well-worn with use and I know that it will be leafed through again and again. It was well worth the £7.32, plus £8.48 p&p that it cost me through Amazon.

I recommend it to you. 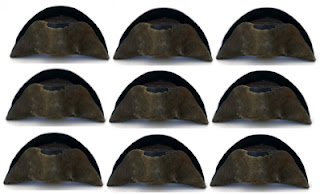