A Turning Point In The Campaign of Nations?

Background
With Feldmarschall Fürst Carl zu Schwarzenberg absent from army headquarters, the three Allied monarchs saw an opportunity to become involved in the campaign directly and to extract a glorious victory. Francis especially saw a battle involving only Austrian troops as an ideal way to ‘prove’ Austria’s commitment to the Allied cause.
The opportunity was presented by the presence of Marmont’s and Reynier’s French-Allied corps, isolated, just west of Bautzen with the bulk of the Austrian troops of the Army of Bohemia closing in on them in a concentric arc to attack. The chance to give them a bloody nose and to redeem Austrian arms was most appealing. 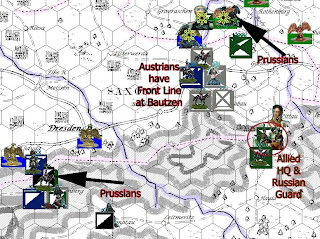 Figure 1: Map of the campaign situation showing Austrian corps of the Army of Bohemia in arc around French-Allied position to the west of Bautzen.
Considering victory as a given, Francis expected that the Austrian army would then be in a position to join with Blucher and the Russians, heading east to link with Allied forces coming from the south-west out of the Bohemian mountains, to defeat all the isolated French forces before Napoleon arrived on the scene. Added to this was the need to try to draw French forces away from sector north of the Spree, relieving the pressure on Berlin so that the Allied armies from there could unite with those further south.
The monarchs conferred. Agreement was reached and orders were sent forthwith to General Radetzky to attack the French.
Initial dispositions
Marshal Oudinot is in overall command of the French-Allied troops but, following the actions around Rothenburg, would not arrive on the battlefield until after 11:00. In his absence, Baron Drouot was in command of the French-Allied troops of Marshal Marmont (VI Corps), General Reynier (VII Corps), with the Polish cavalry of Kellermann’s IV Reserve Cavalry Corps and Saint-German’s 3rd Heavy Cavalry Division from II Cavalry Corps; a total of some 57 000 with 160 guns.

Facing them was the Austrian army commanded by Graf Radetzky. He had at his immediate disposal the 1st Advance Guard Corps (Liechtenstein’s and Bubna’s divisions), Colloredo’s I Korps, Klenau’s IV Korps and Nostitz’s cavalry reserve of the 1st and 2nd Cuirassier Divisions. These 54 500 men with 126 guns would eventually be reinforced by Meerveldt’s II Korps, Hesse-Homburg’s Reserve Corps and the Austrian reserve artillery, bringing the total to some 80 000 and 304 guns; but not until late in the day. 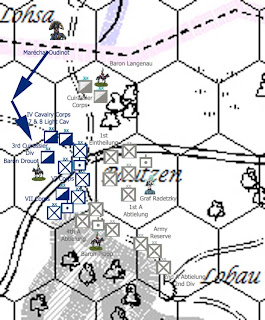 Figure 2: Enlarged campaign map showing the area to be represented on the tabletop and the initial dispositions of the troops (kindly supplied by David Malinski). 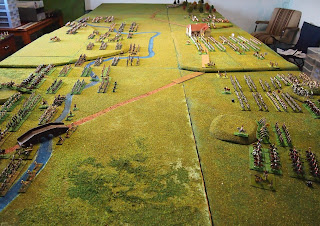 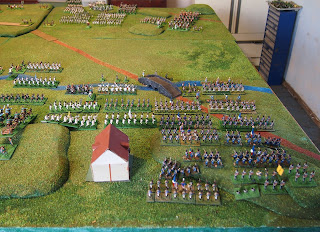 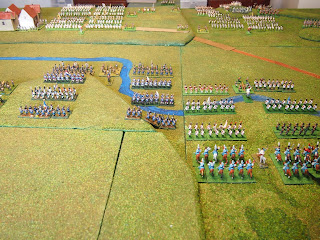 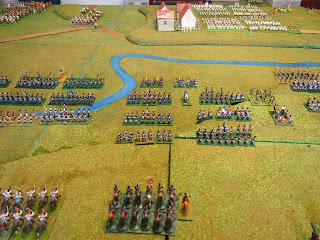 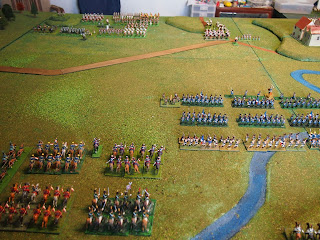 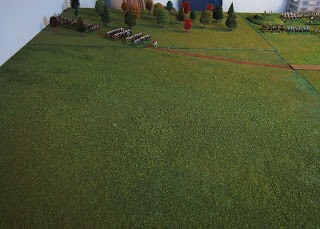 Battle plans
Radetzky’s had an elaborate plan that relied on pre-estimated times to coordinate the attack of the Austrian right, then the left and eventually the centre.

At 0900 hours, the Advance Guard divisions were to commence the attack on the French-Allied left. They would be joined by the heavy cavalry divisions, which would commence their movement and attack around the French-Allied left flank at 1000. At 1030, Hardegg’s small light division of I Korps was to join with the Advance Guard divisions, while the two infantry divisions of IV Korps advanced against the left of the French-Allied position on the ridge opposite Bautzen, with Mohr’s light division protecting their left flank. By this time it was hoped that the French-Allied centre would be weakened by artillery and the need to react to the flank threats, so Radetzky would launch I Korps at the centre. He also planned that the staggered attacks would give time for the Austrian reserve to arrive (due at 1700), hopefully to claim the corps de gras, or at least break the French-Allied will.

For his part, Drouot sent his cavalry to meet the Austrian cavalry on the French-Allied left and used his local superiority in numbers provided by Reynier’s Corps to attack the Austrian left.

Part 1: 0900–1400
The attack was begun by the Polish cavalry on the French-Allied left and Reynier’s Saxo-French divisions on the right of their army. The Austrian attacks developed progressively, according to the schedule devised by Radetzky.

The Austrians had the better of the cavalry fight in the north. Sulkowski’s 8th Light Cavalry Division and the 13th Polish Hussars of the 7th Light Cavalry were broken (the 3rd Polish Lancers retreating and later rallying), while the French heavy cavalry lost ground (and troops) in a series of mêlées. The Austrians did not come off unscathed, losing individual units from the two advance guard divisions; Vincent Chevau-légers, Lichtenstein and Blakenstein hussar regiments and two of Hardegg’s cavalry units.

In the south, the Saxon divisions of Reynier’s corps suffered from the Austrian artillery. Lecoq’s 24th Division was broken, so a gap appeared in the French centre.

The Austrians were yet to have a division ‘break’, but had a number of divisions on 'the edge'.

Photos: Below are some pseudo time-lapse photos from each of the first eleven turns (0900–1400 inclusive)—except 1100 and 1400 were both missed somehow! 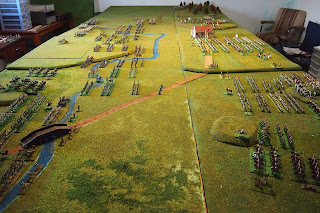 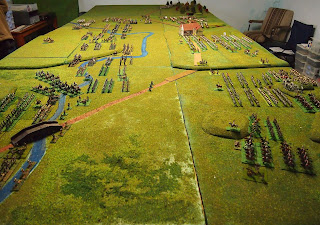 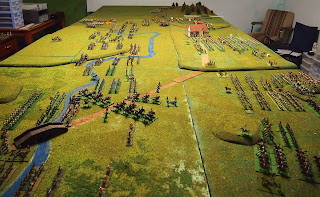 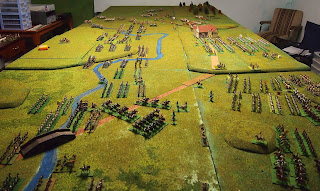 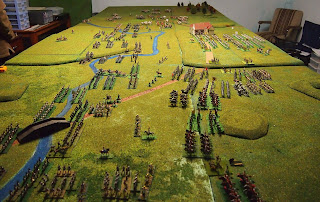 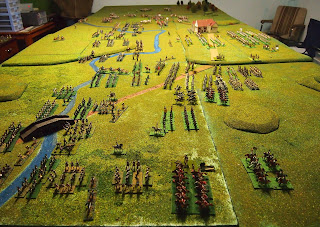 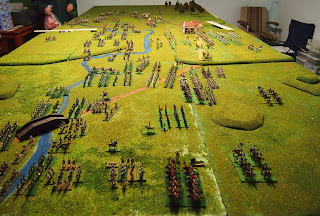 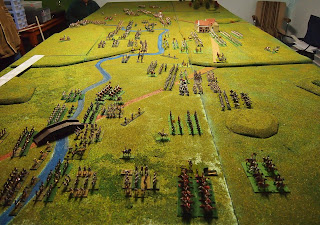 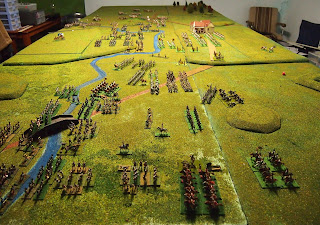 At this point the battle was on a knife edge. The next three to four turns, 90–120 minutes of the battle, were expected to determine if it would be a bloody draw or a marginal victory to one or the other side.

Part 2: 1430–1600
The second half of the battle continued as the first with steady attrition on both sides as the Austrians advanced in a concentric circle around the French-Allied position and began to make headway in the centre.


At 1600 there was movement and dust visible away to the south-east. The Austrian Infantry Reserve Corps and II Korps were approaching the battlefield. 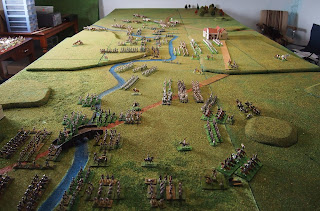 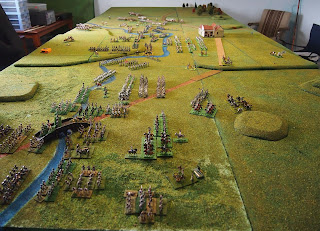 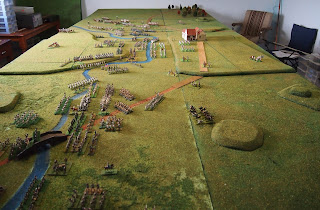 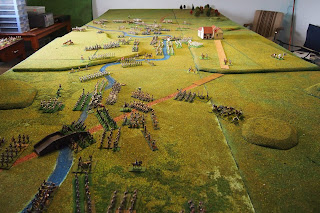 Result
Seeing the movement of a large body of troops away to the south-east, Baron Drouot and Marshal Oudinot conferred. It seemed an ideal time to withdraw, so it was ordered. The withdrawal of the army was conducted in good order, covered by the squares of Compans' and Friederichs' near full-strength infantry divisions of Marmont's VI Corps, plus whatever of the cavalry could be rallied.

On the Austrian side, Radetzky sent Bubna’s and Liechtenstein’s light divisions of the advance guard to shadow the retreating French-Allied army, while the I Korps, IV Korps and the cuirassier divisions were allowed some well-earned rest as they awaited the arrival of the Reserve and II Korps.

A turning point?
While this could only rate as a minor victory for the Austrians, it may well prove to be a turning point in the campaign; or at least one of the more significant outcomes.

The Austrians have proved themselves in battle and to their allies. The French-Allied forces holding the eastern flank have been defeated and forced to withdraw, so that the Allied Army of Bohemia is a step closer to becoming a united, potent force.

Will this take pressure off Berlin and force Napoleon, whose whereabouts until now is unknown, to make an appearance in the southern sector?