This weekend Mark (aka 'Marc') and I are heading to Albany to join the members of the Serpentine Wargames Club for a game of the Battle of Talavera.

We will be using the house rules that they are developing, an attempt to take the good ideas from Empire and make them more playable. I'm looking forward to seeing what the rules are like and how they play; bearing in mind that they are a work in progress. 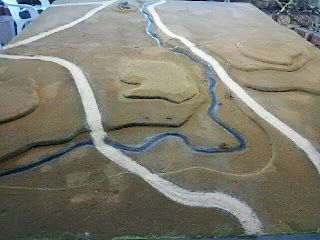 A view of the Talavera table, looking from the north. The Portina Brook is in the middle of the board, Talavera in the distance, with the Cero de Medellin in the right foreground. The French will be attacking from the left of the picture, with the British at this end of the table and the Spanish in and around Talavera. John has originally built this terrain in the 90s (?correct John) and has renovated it for the weekend's game, so it's going to look quite different now.

We are looking forward to a great wargaming weekend!