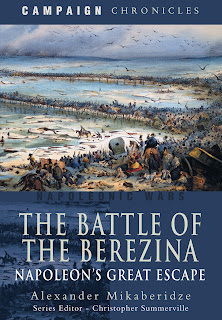 The Battle of the Berezina has the standard format of all of the books in this series, viz. the background to the campaign, the detailed ‘Campaign Chronicle’ (which comprises the majority of the book), a brief chapter discussing the aftermath and a concluding chapter. Missing thought are the expected, useful appendices.
The background provides, a short, descriptive summary of the causes of the 1812 campaign and the main events leading to the retreat of the French-Allied army, but Mikaberidze also goes well beyond this. He highlights key aspects “in order to understand what happened on the banks of the Berezina in the last days of November”. These include the key Battle of Maloyaroslavets, the escape of the French army at Vyasma and Krasnyi (Krasnoe) and, most importantly, the “St Petersburg plan”.
This plan, devised under the influence of Kutusov’s false claims of victory at Borodino, called for Wittgenstein to drive the French-allied army of St-Cyr to the Nieman while Chichagov combined with Tormasov to drive the “Saxons into the Duchy of Warsaw, the Austrians into Galicia, the Prussians and Württembergers across the Nieman”, before turning to the Berezina to act as the anvil for Kutusov’s hammer, thus effecting the destruction of Napoleon’s ‘main’ army. The problem, as MIkaberidze relates, was that the plan was initially based on a false premise (victory at Borodino), it required co-ordination between widely separated armies and, due to his distance from the front and out-dated information, Alexander sent orders that did not reflect the situation in the field.
Mikaberidze adds further to this scene-setting in the concluding part of the background in which he presents biographies of the key Russian commanders: Kutusov, Chichagov, Wittgenstein and some of their main subordinate commanders: Lambert, Langeron, Czaplic and Sabaneyev. The biographies of the latter group introduce these lesser-known commanders to the reader. Those of the former serve the same purpose, but also provide background to what contributed to the poor co-ordination between the Russian armies in the battles around the Berezina; chiefly the rivalry and mistrust between Kutusov and Chichagov and the fact that Wittgenstein was in command of the largest army and first major independent command of his career.
The ‘Campaign Chronicle’ begins on 11th October with Chichagov’s manoeuvring against Schwarzenberg, his occupation of Minsk and the bloody capture of Borisov. In the first third of this section of the book (some 69 pages) Mikaberidze describes the manoeuvring and actions around the ‘fronts’ created by the three Russian armies; the southern (Chichagov’s 3rd Western Army), northern (Wittgenstein’s 1st Independent Coprs) and central (Kutusov’s combined 1st and 2nd Western Armies) area, between 11th October and 25th November. The last two-thirds, some 97 pages, is dedicated, fittingly, to the crossing of the Berezina and associated battles, between 26th and 30th November.
Mikaberidze’s fine prose is in clear evidence as he relates these momentous events of nearly 200 years ago. His narrative reads like an historical novel, while losing none of the required detail and accuracy. Each action and battle are described in detail, interspersed with numerous quotes and anecdotes from the memoirs of participants, adding further colour and interest to this fine piece of non-fiction writing.
Throughout this section, Dr Mikaberidze builds on his theme of the opportunity lost by the Russian generals, to present a tale of poor co-ordination, spurred as it was by the poor relations between the generals, the unrealistic plan of campaign and the out-of-date orders from St Petersburg.
The ‘Campaign Chronicle’ also includes several tables of estimated strengths of ‘corps’, ‘divisions’ and brigades’ of the former Grande Armée (though sadly none for the Russian armies). In addition, the text contains numerous references to specific units or higher order formations of the armies of both sides, providing the number of men at arms at crucial stages of this phase of the 1812 campaign. Such information is invaluable for the wargamer who wishes to recreate the battles on the tabletop.
Despite the failure of the Russian commanders to push their advantage sufficiently, the losses of the ‘Grande Armée’ during the battles around the Berezina and the crossing make for salutary reading. These are detailed in the ‘Aftermath’ chapter, which includes tables showing the estimated losses reported in various sources and of the losses of officers from the ‘top 15’ infantry and cavalry regiments. Russian losses, which are “less well known due to sketchy reporting” and were about half those of the French, are merely given as a range. The book ends with a concluding chapter in which Mikaberidze assesses critically the performance of the Russian and French-Allied armies and, particularly, of the commanders.
The book is supported by excellent maps, clear black and white plates and detailed notes and bibliography. There are four maps showing the area of the Berezina, key lines of operation, Action at Borisov and battles around the Berezina. The maps are clear and detailed and help to locate places mentioned in the text. Furthermore, they provide a useful resource for wargames to help with planning a campaign and/or scenarios. This is also the case with the plates, which, in addition to reproductions of paintings of some of the key commanders from both sides and some of the dramatic paintings of the Berezina battles and crossing by Orange, Kossak, grenadier Pils, Myrbach and Adam, feature six photos of views of the Berezina and the surrounding floodplain in the area in which the battles occurred.

Unfortunately, there are no orders of battle, save what is provided in the text and tables in the ‘Campaign Chronicle’ section (mentioned above). This may be understandable given the state of units and higher order formations in the former Grande Armée, but is a surprising and disappointing oversight for the Russian armies. While the information seems to be provided throughout the text, an appendix containing orders of battle, at least for the Russian armies, would have added greatly to the book.
This book is a well written and researched account of some of the most dramatic, but often overlooked events of the 1812 campaign. I will be interested to compare it with the late Francois-Guy Hourtoulle’s “Crossing the Berezina, A Victory During The Retreat”, which is on its way to me now.
Posted by James Fisher at 01:17