Catching Up On Past Games (10): Battle of Austerlitz: Bagration’s Battle

A Fields of Glory Scenario

33rd ANF game, played 6th April & 4th May 2013
This was the second of the Fields of Glory scenarios based on sections of the Battle of Austerlitz that we played earlier this year. The scenario depicts Bagration's surprise attack on Lannes' V Corps which formed the left flank and 'hinge' of the French line as Napoleon swung his right around to re-take the Pratzen Heights and split the Russo-Austrian army in two.

As with previous games from the Fields of Glory book, this was a fascinating encounter. Mark took Bagration's Russians, while Julian acted as Lannes, commanding both his V Corps and the reinforcing heavy cavalry. The game was played over two of our 'sessions' as time was limited on the first day. I missed the first part, but joined in the second as observer and photographer. 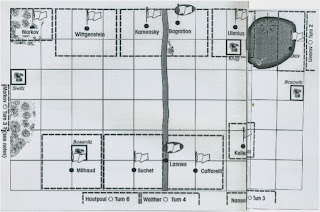 Scenario map from Fields of Glory 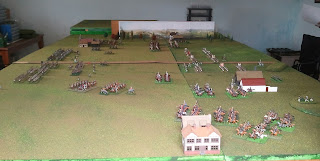 Move 1 looking down the lines (Blasowitz nearest camera, Krug beyond). 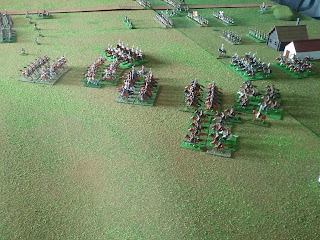 The French light cavalry do their best. 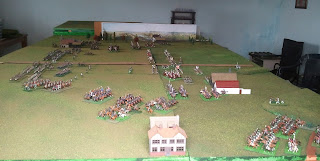 Move 2 looking down the lines  (Blasowitz nearest camera, Krug beyond).

Move 3 and the French heavy cavalry have arrived.

The French began well, aided and abetted by good die rolls of course. The chasseurs à cheval in particular finally managed to stand up to at least the Russian light cavalry and slowed him down [these wonderful light horsemen are much maligned by our Russian players—Ed.]. In the centre his infantry attack has bogged down horribly, whilst the arrival of the French heavy cavalry looks like having turned the battle in the French favour. True, both sides have lost two divisions each, but the Russians have lost considerably more units. 'Bagration' was a very worried man at the end of Part 1.

You'll see from the end of Move 6 (photos below) that his entire left flank looks in danger of collapse; his cavalry is retreating, with only two French cuirassiers [figures] lost. His cavalry on the other flank are menaced by two further units of cuirassiers and even Krug is now under threat. His centre and his right are under threat as well. It could, of course, still reverse, but it looks unlikely, and I have six more moves to try for a Glorious Victory. But it could still turn the other way, it could.... 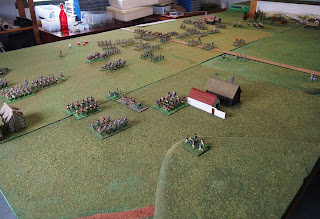 End Move 6 with Krug in foreground. 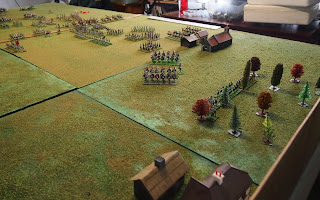 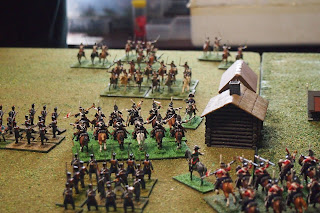 Having finally emerged from the woods around Siwitz, Markov's hussars charge, defeating one of d'Hautpoul's cuirassiers! 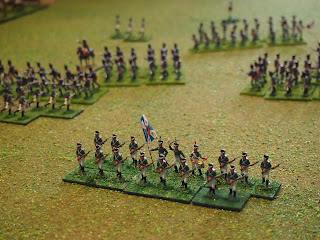 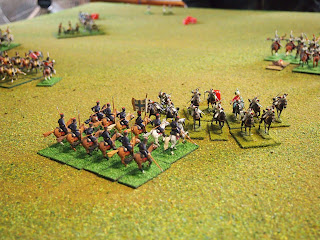 with unlikely support from Ulanius' Cossacks, who took advantage of a blown cuirassier unit from Nansouty's command, seen below fleeing, broken, but not completely beaten. 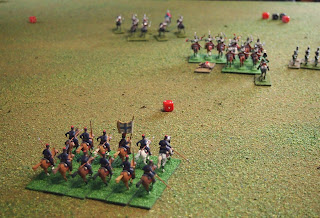 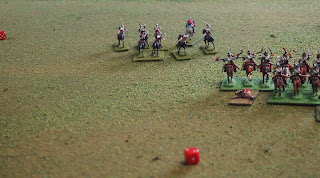 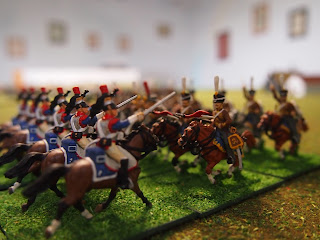 Meanwhile, on the Russian left, Uvarov's hussars take on another unit of Nansouty's armoured men, 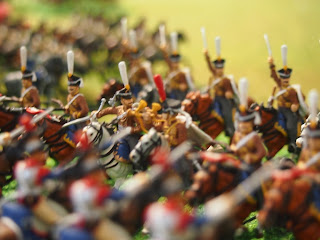 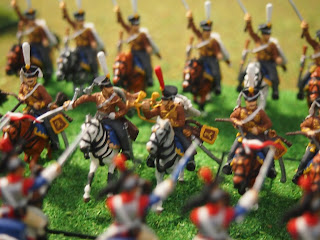 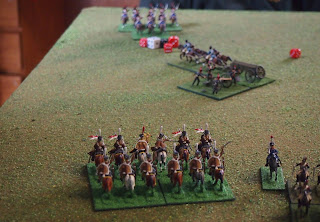 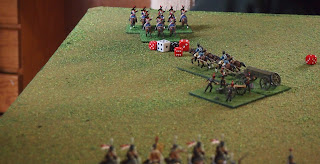 Perhaps it was turning the other way, aided by a change of luck? 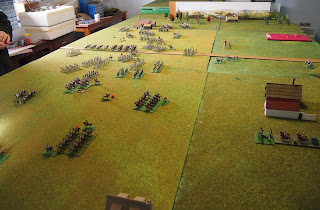 Overview of the table at the end of Move 7 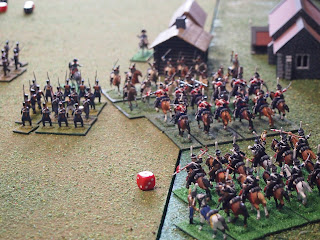 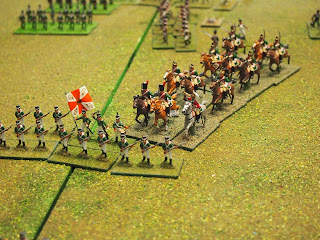 In the centre, Walther unleashed his dragoons at a retreating unit of Kamensky's infantry... 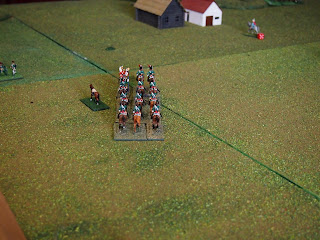 leaving the Russian centre in an even more perilous situation. 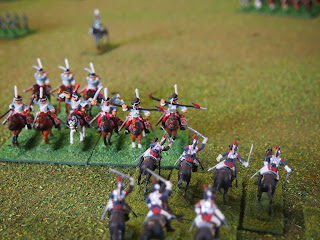 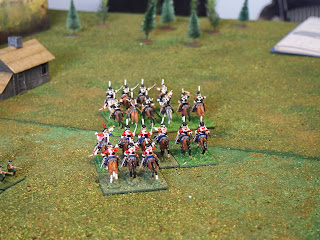 Back on the Russian right, d'Hautpoul's men were successful, driving back both units of Markov's hussars... 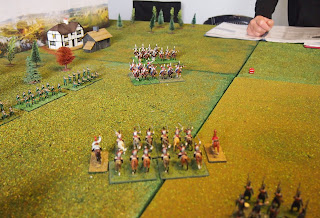 but not breaking them and they successfully rallied. 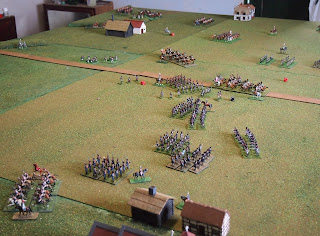 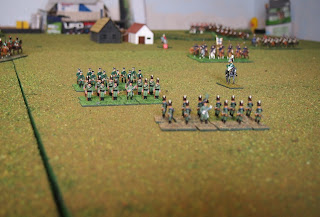 Ulanius' jägers were well in advance, not knowing that their support had evaporated. 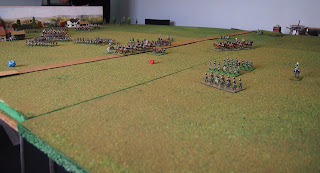 At that point, the game was called. Below are the photos of the final field, from south to north. 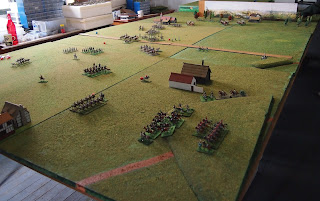 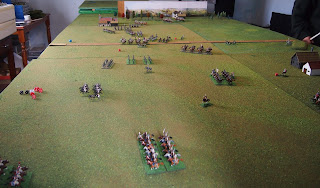 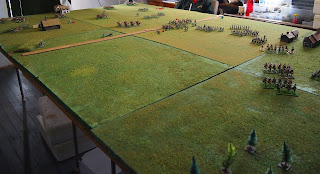 Result
The game was a draw as agreed by the players  and (surprisingly) a technical Russian victory by the scenario.

This report brings to an end this series of 'catch-up' posts. As they are want to say on hard-hitting FM Radio news, "you are up-to-date"!