After the disastrous defeats (for the Romans) at Arausio and Vercellae, Marius took the lead from his historical counterpart and played a ‘Fabian’ strategy.

The new approach was used firstly in Taurisia, where, in Turn 8 of 105 BC, the armies of Silanus and Longinus contacted the Teutones, took up defensive positions behind the River Po and waited. Unwilling to attack such a strong position, the barbarians withdrew. Chalk up four training points for the Romans!

The next month it was Marius’ and Catalus’ turn. Meeting the Cimbrians in Comum, they too took up defensive positions behind the Po. The Cimbrians withdrew—chalk up four training points for these Romans too.

Back in Taurisia, Silanus' and Longinus’ armies faced with the Cimbrians, remained in their defensive position behind the River Po and waited. Chalk up another four training points for the Romans. Their troops were now fully trained (in campaign terms).

The new year, 104 BC, Marius’ and Catalus’ armies had remained in Comum. This time the Teutones approached… I think you well and truly have the idea by now?!

Marius now felt ready to face the barbarians. After two turns of manoeuvring they met the Teutones, once again in Comum.

Below is the pictorial story of the game, played on 9th May. I’d forgotten my camera (clearly I knew what was afoot!), so had to use the mobile device to take the photos, hence they are not the clearest (sorry!). 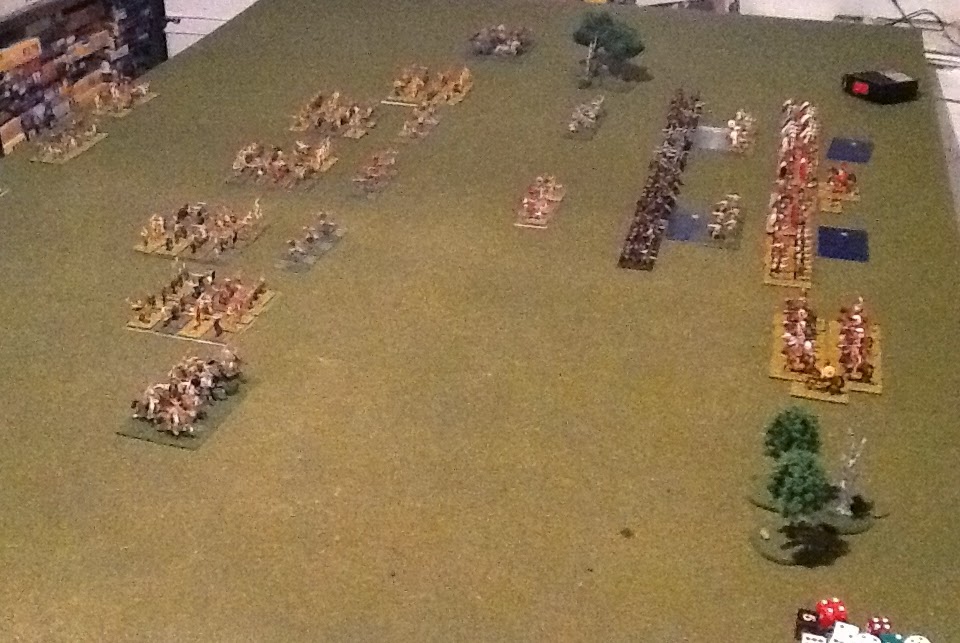 On an open plain, Marius' (with Catalus, the cowardly) met the Teutones. The latter at left of photo, Marius' troops in front of Catalus' at right. 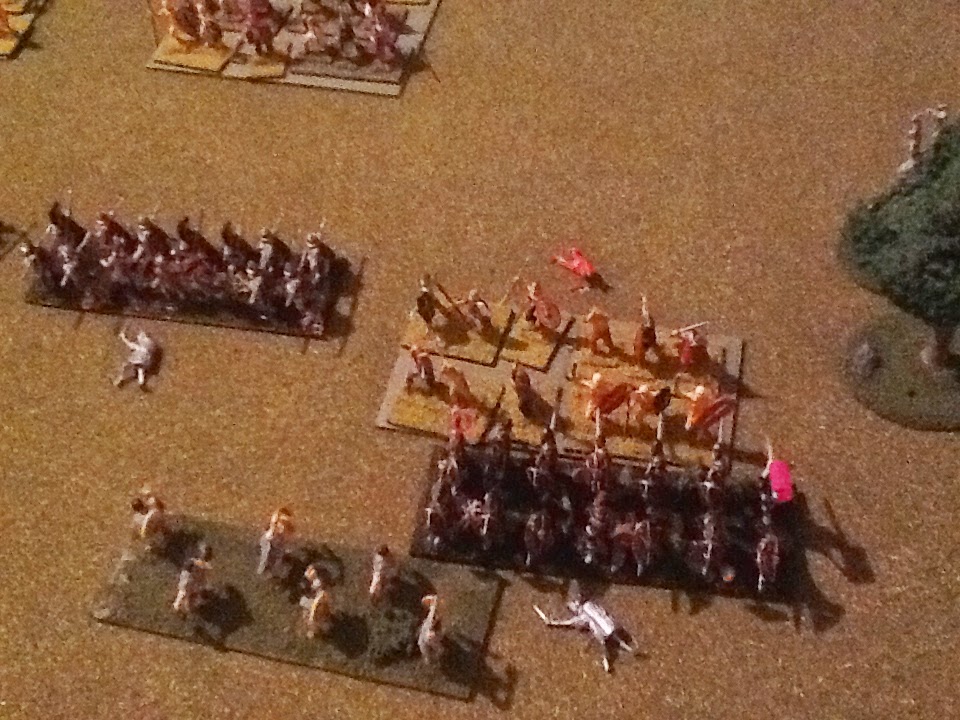 Here we go again, one of Marius' legionary units, beaten in mêlée was 'destroyed', thanks to the evading skirmishers behind. 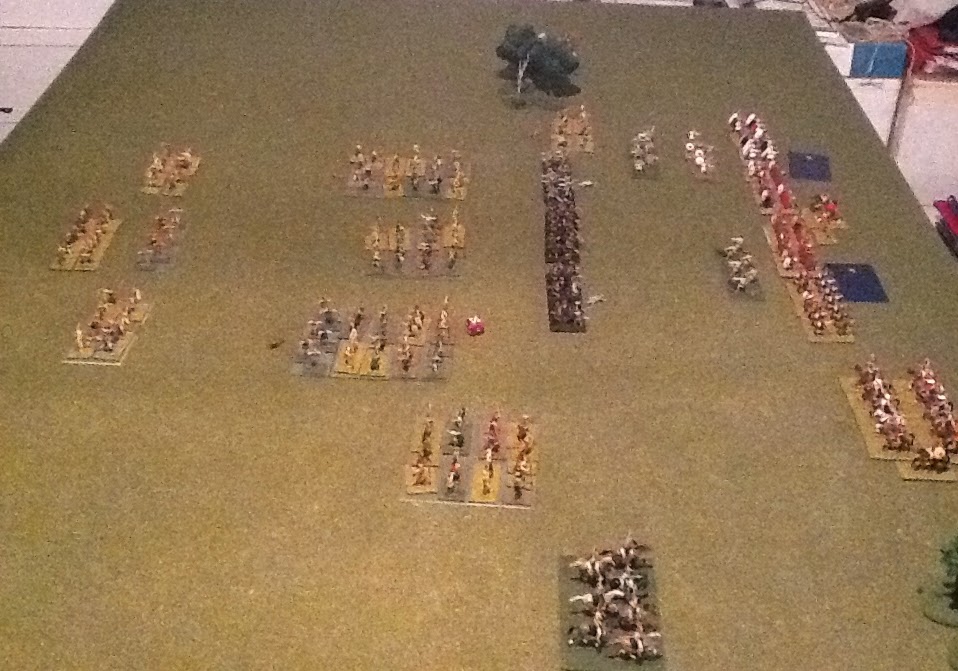 The Teutones advanced in large warbands... 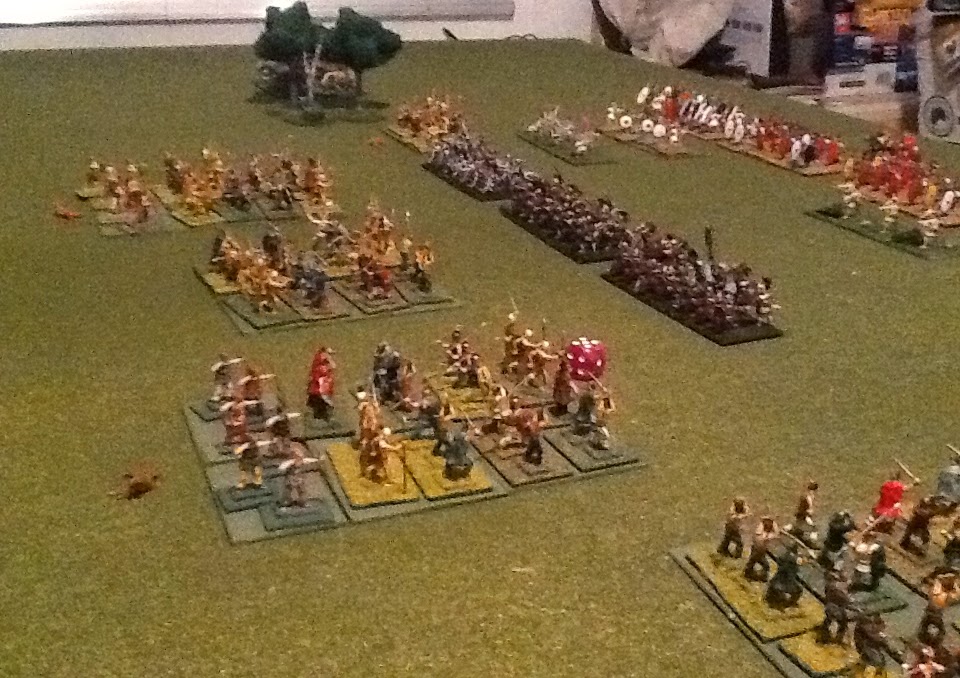 and Marius' legions prepared to receive them. 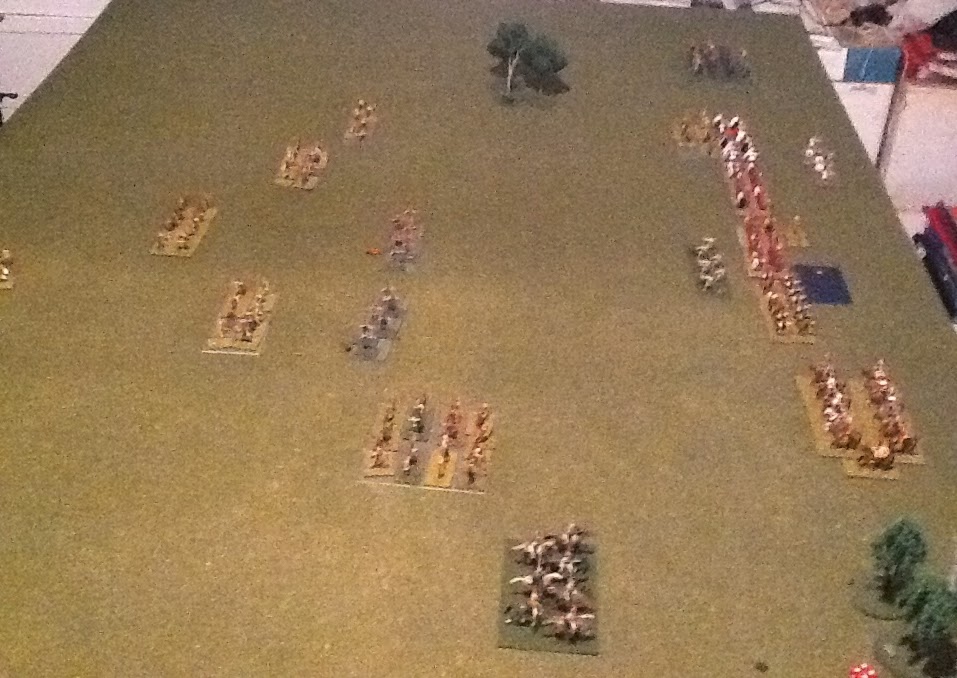 They did not hold for long! 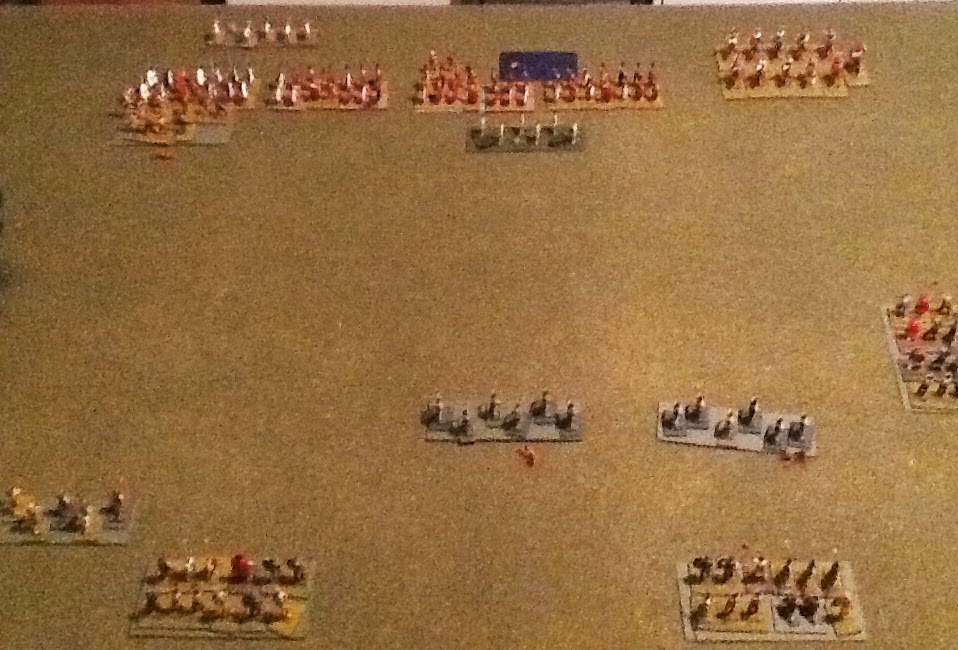 So it was left to Catalus to halt the barbarian onslaught. 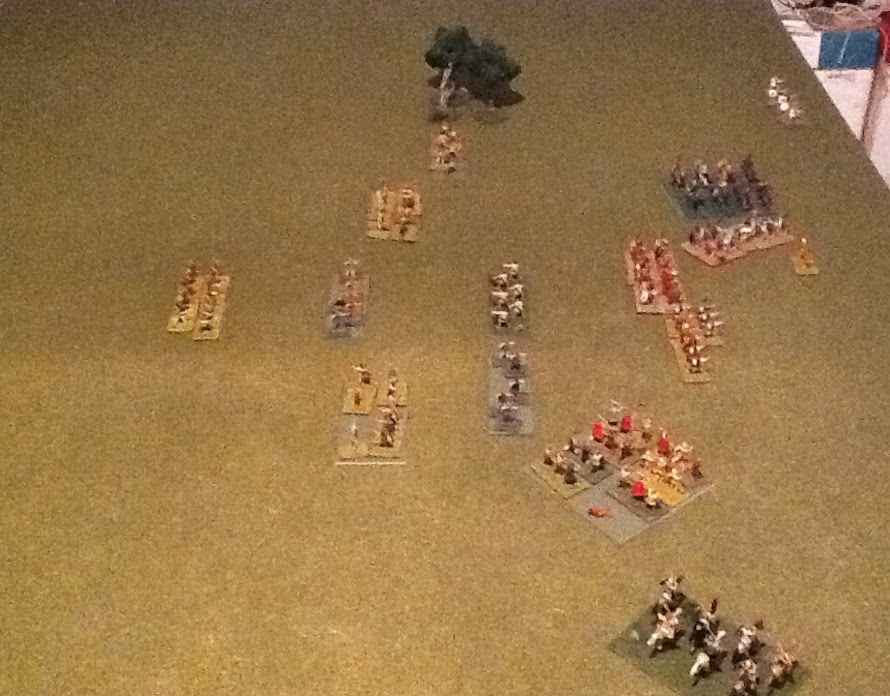 No longer 'the cowardly', his troops held for longer, but the loss of two units was sufficient to reach the army breakpoint. 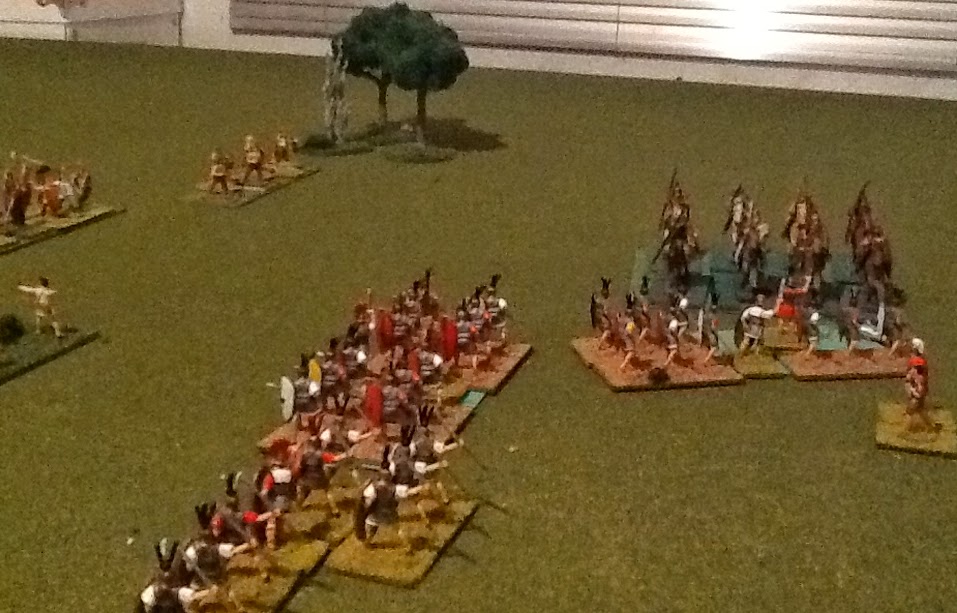 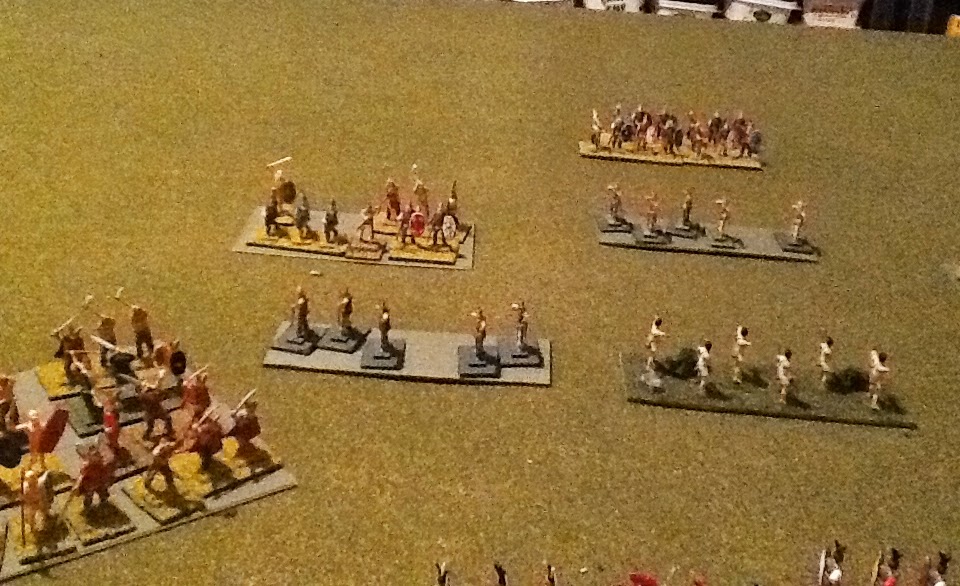 Game over, the Teutones celebrate!

Time to melt down the figures and burn the rules… no, no Roman determination and stoicism will prevail… eventually,… surely?!
Posted by James Fisher at 23:06