Battle of Perusia, 104 BC (fictional)

After several turns of manoeuvring, the Roman consuls managed to combine their forces to face the dreaded Cimbrians at the Battle of Perusia.

Marius was overall commander and had his own plus Catalus (“the cowardly”)’s army, along with Silanus, “the genius” who brought with him Longinus (the fair). Buoyed by their combined strength, the Romans prepared to attack the Cimbri, who were defending a long hill. 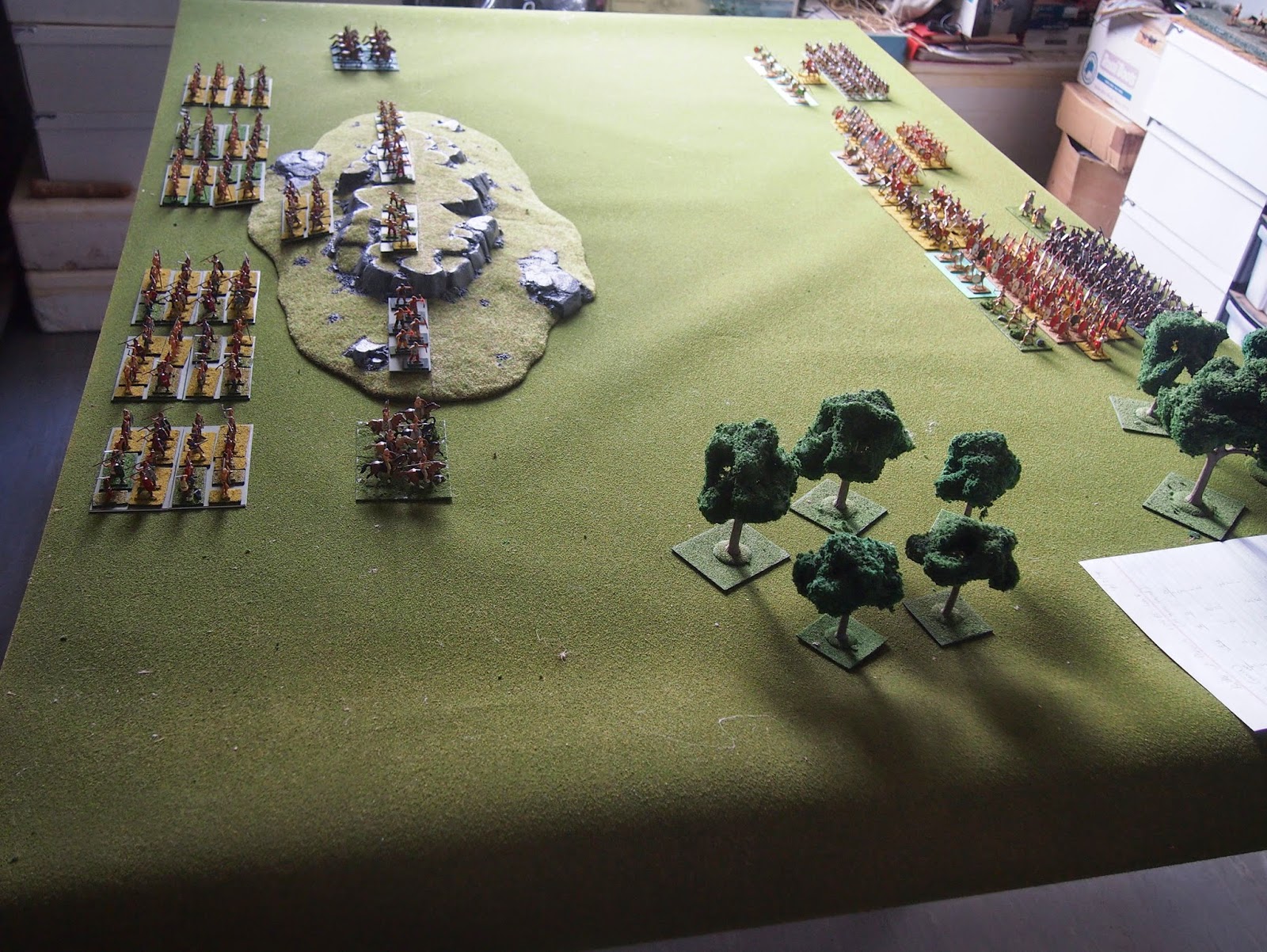 This game, played on 18th May, began with a familiar arrangement; Romans at right, Cimbrians at left. 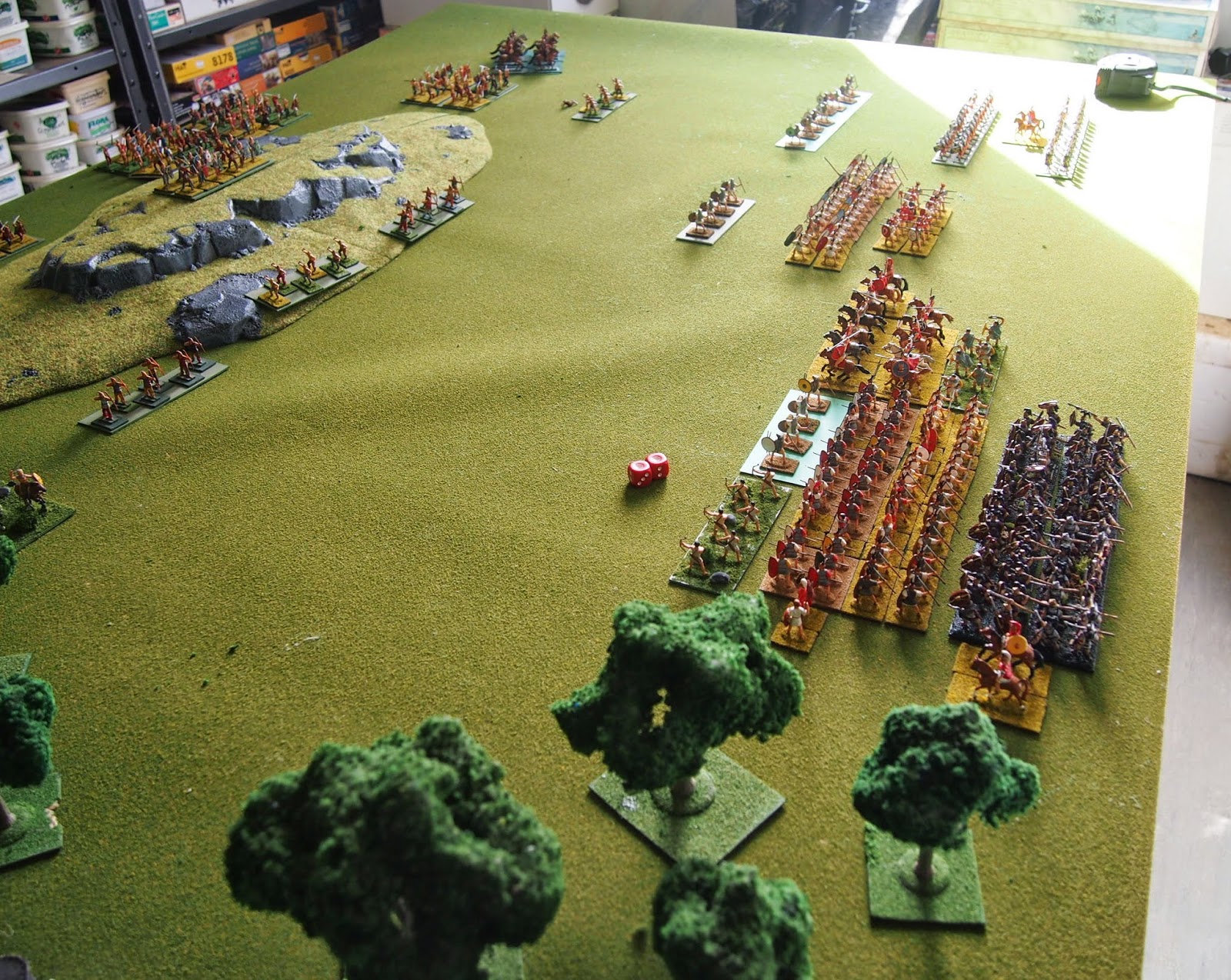 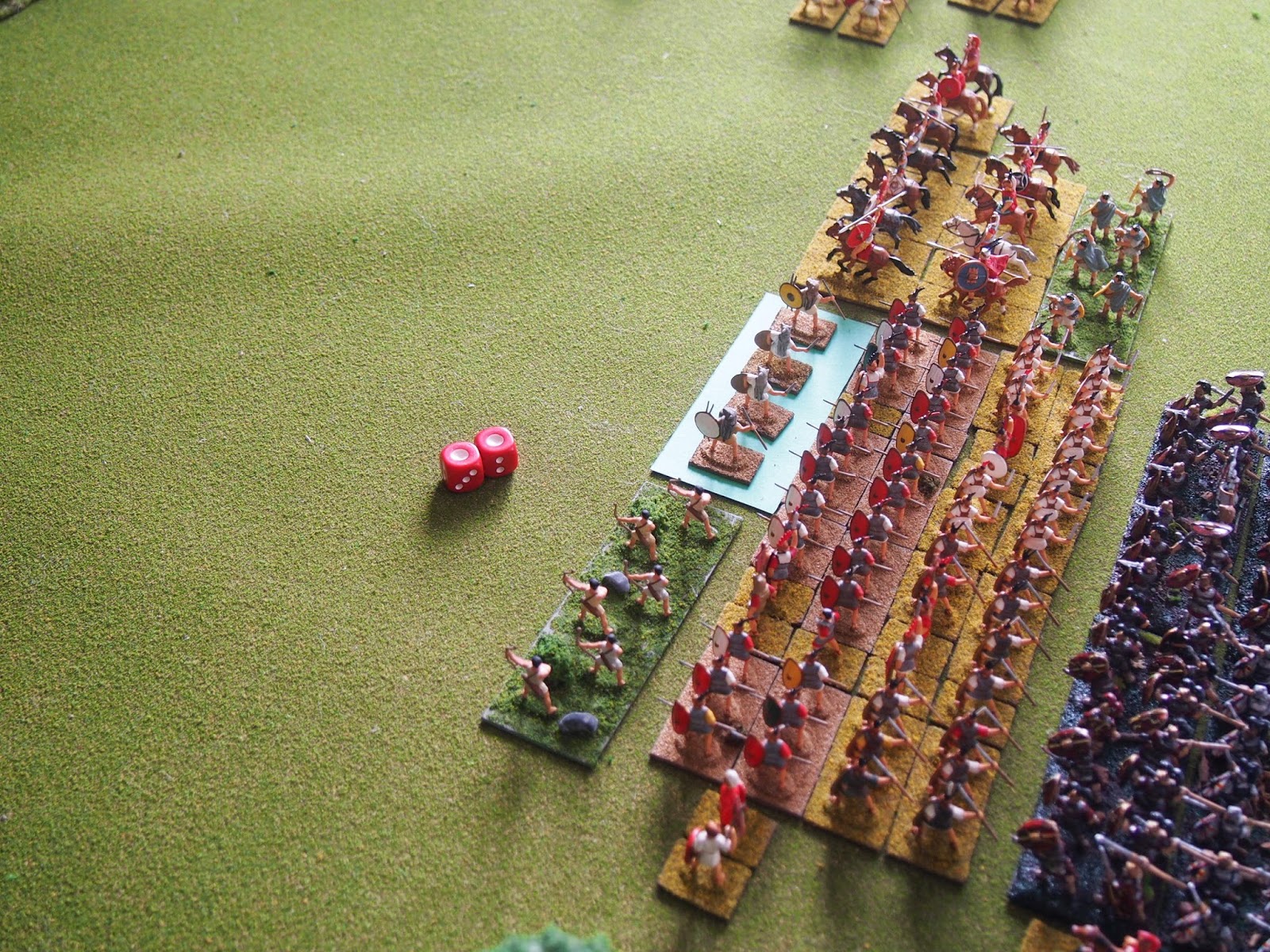 Perhaps not. A roll of double-one means that Catalus was following the Brave Sir Robin approach. 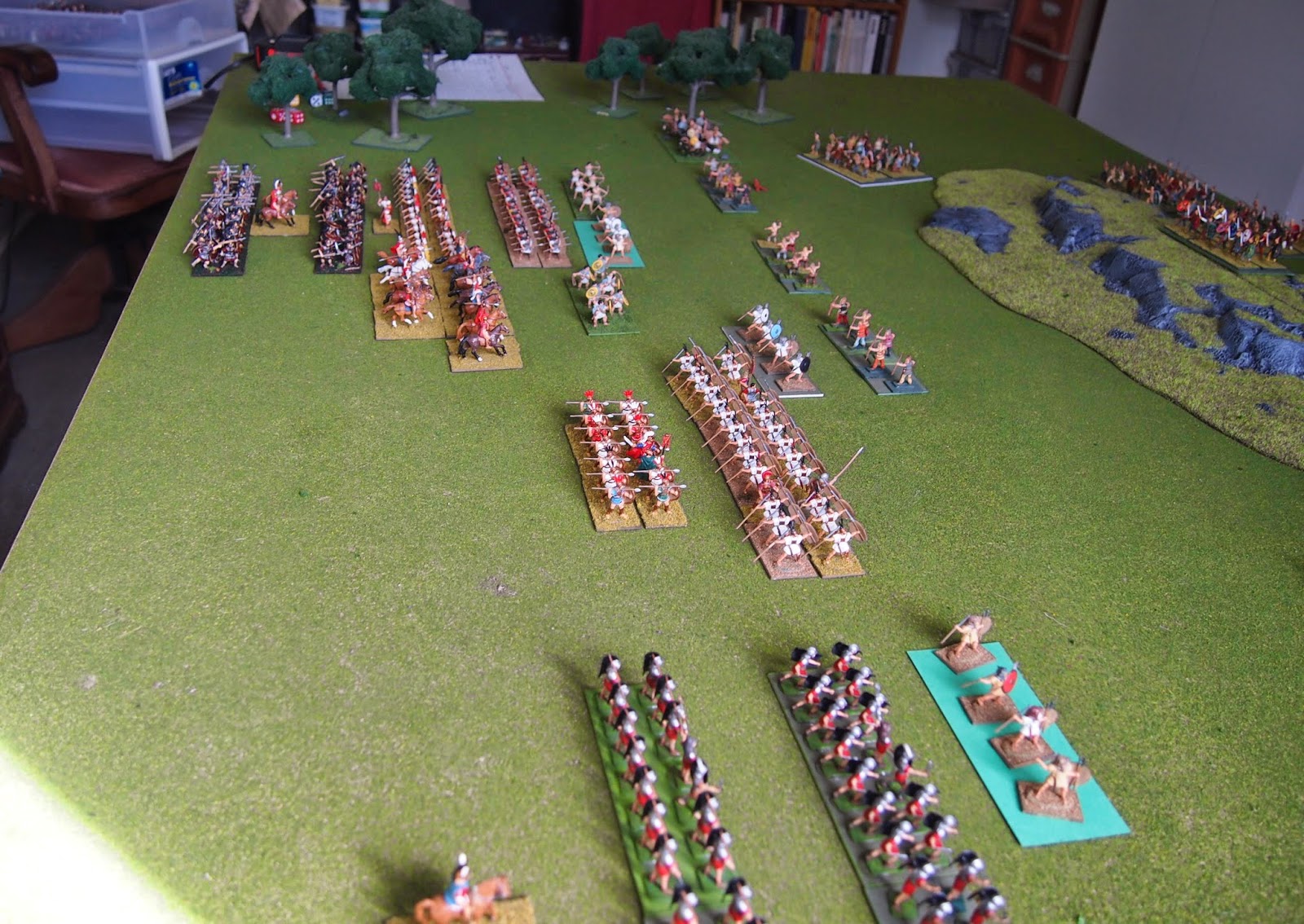 Boiorix sent forward skirmishers, cavalry and a few warbands, while the Romans, by default, refused their left. 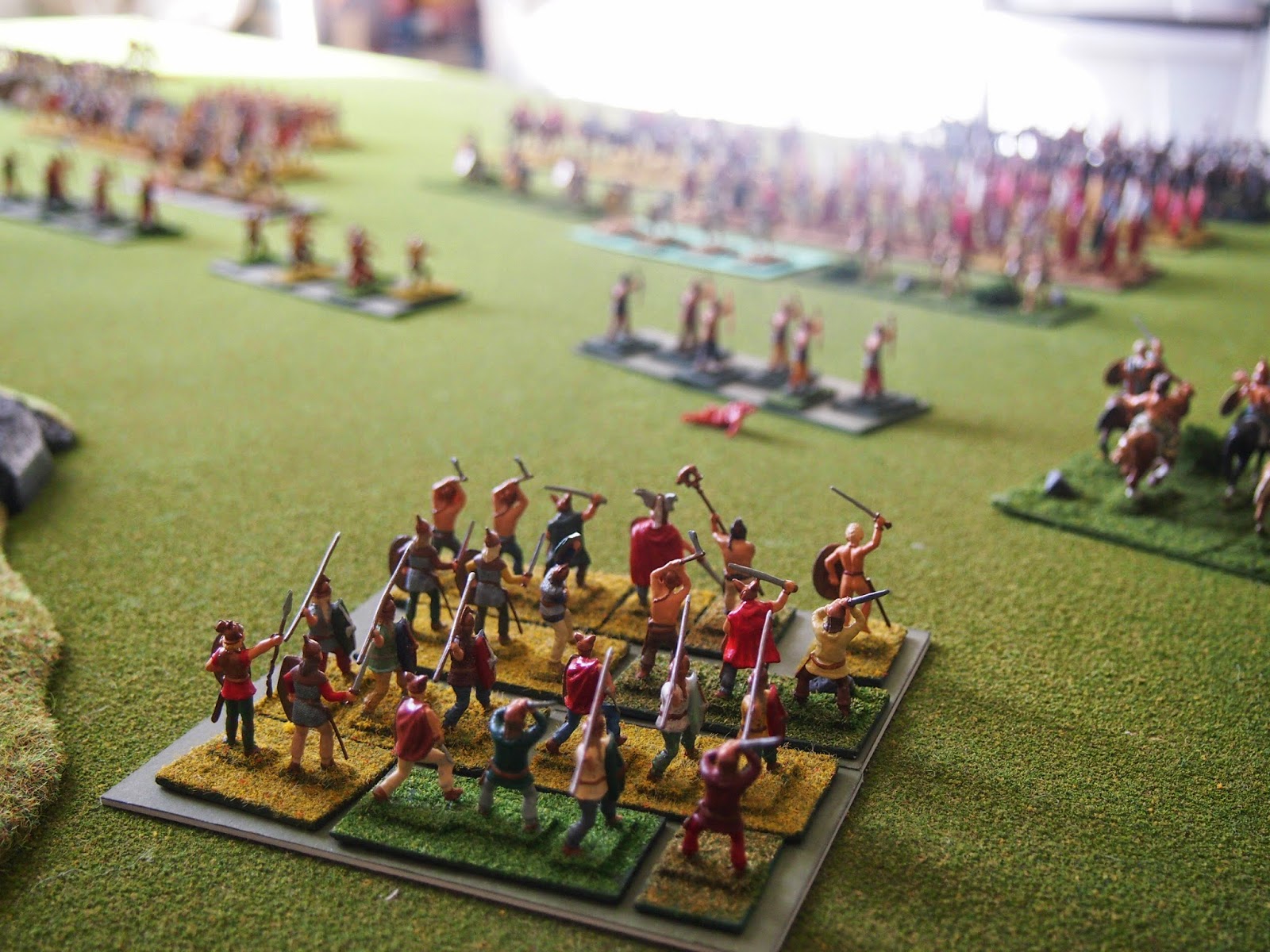 Above and below, on the Cimbrian right, the warband advances confidently, as Catalus’ men face pressure from Marius to advance. 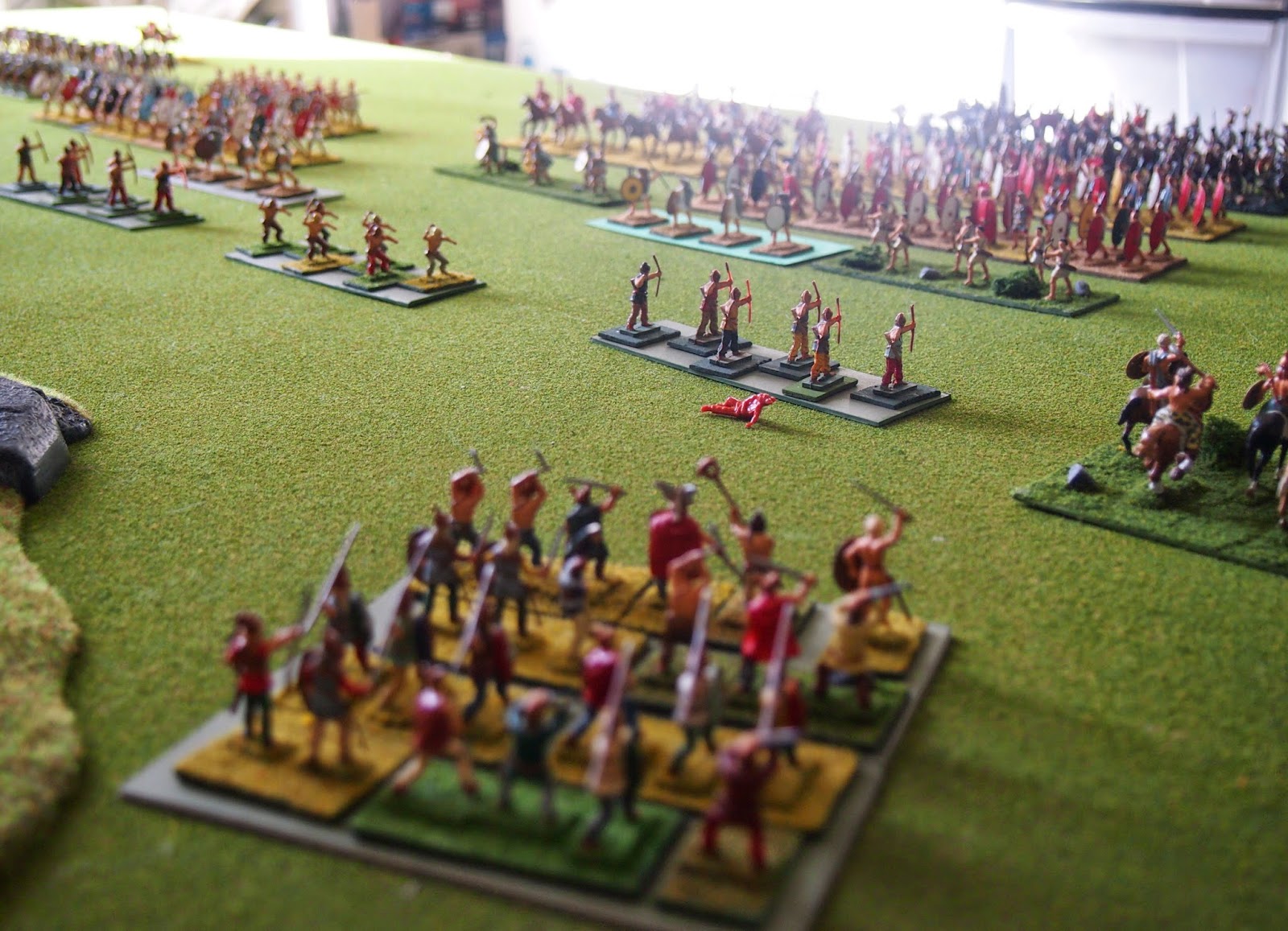 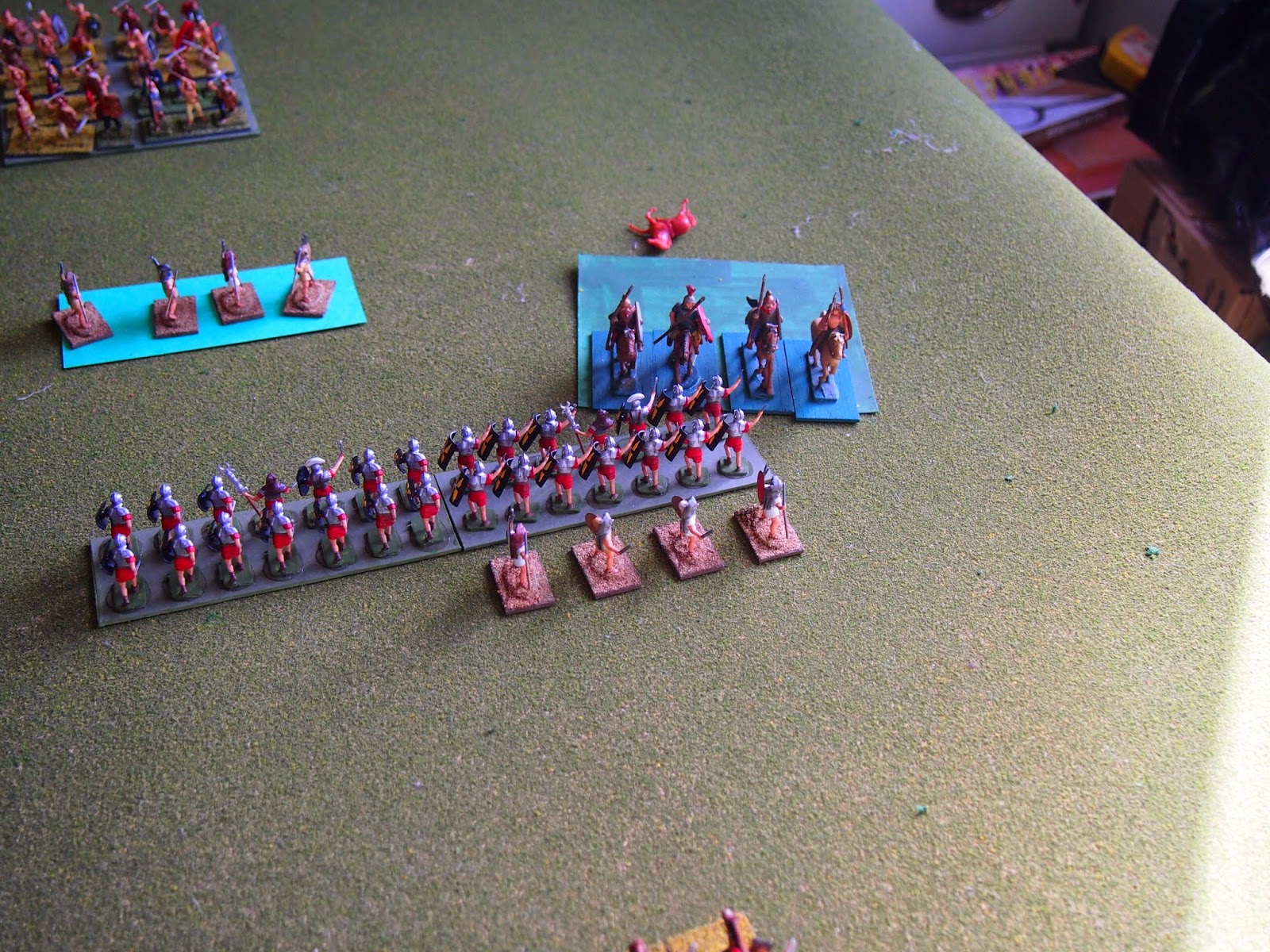 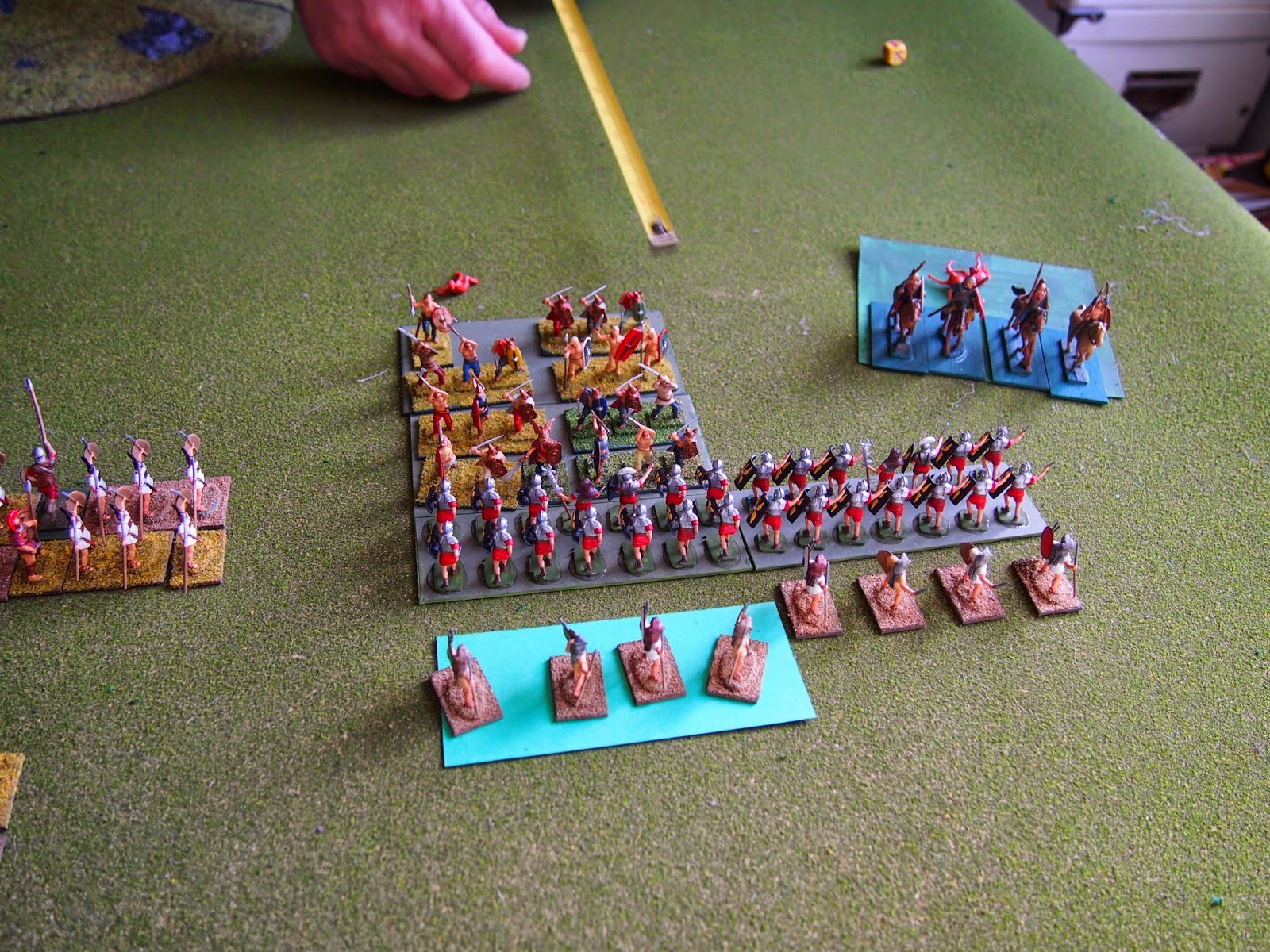 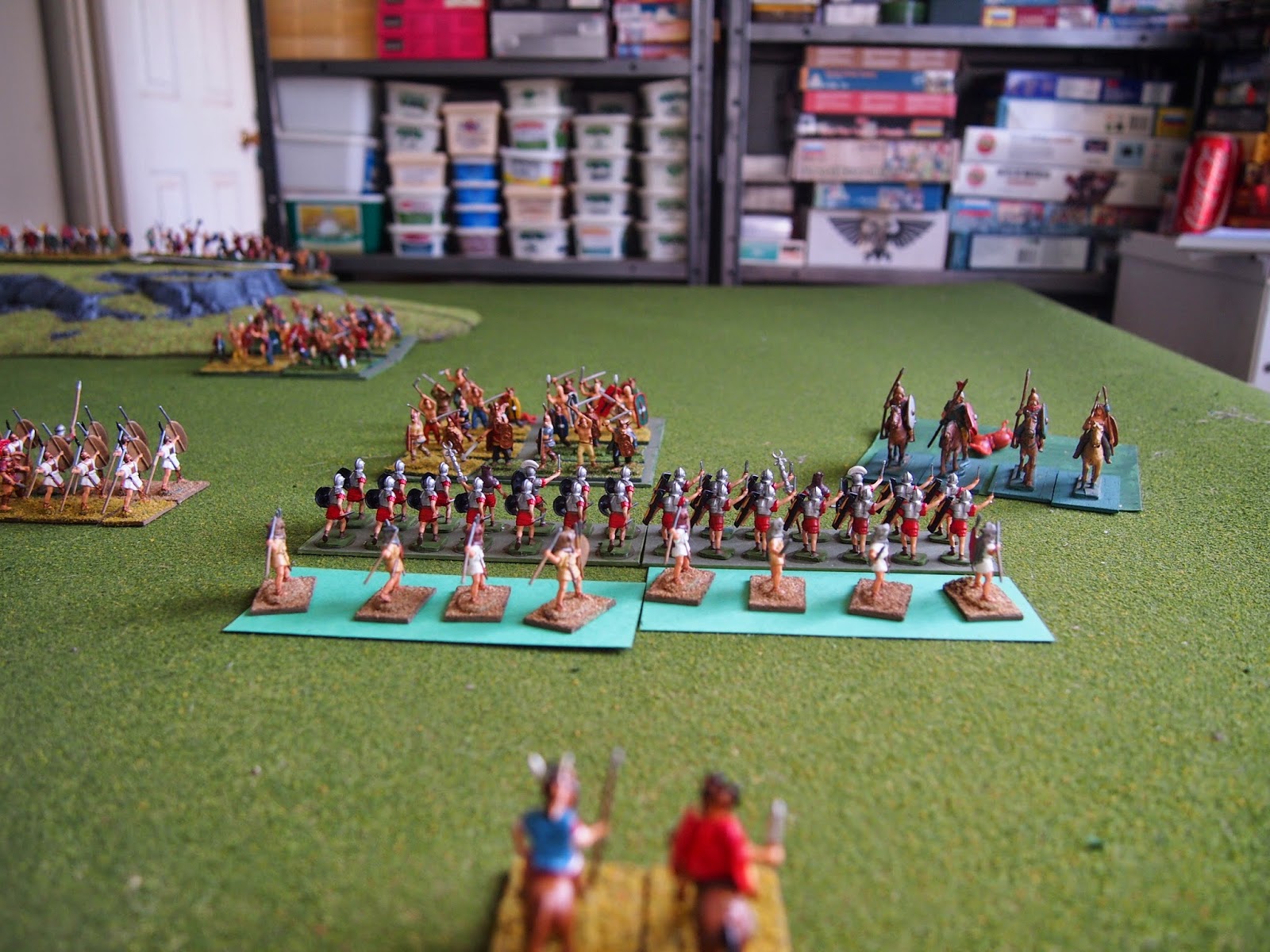 it too was forced back, but with little loss. 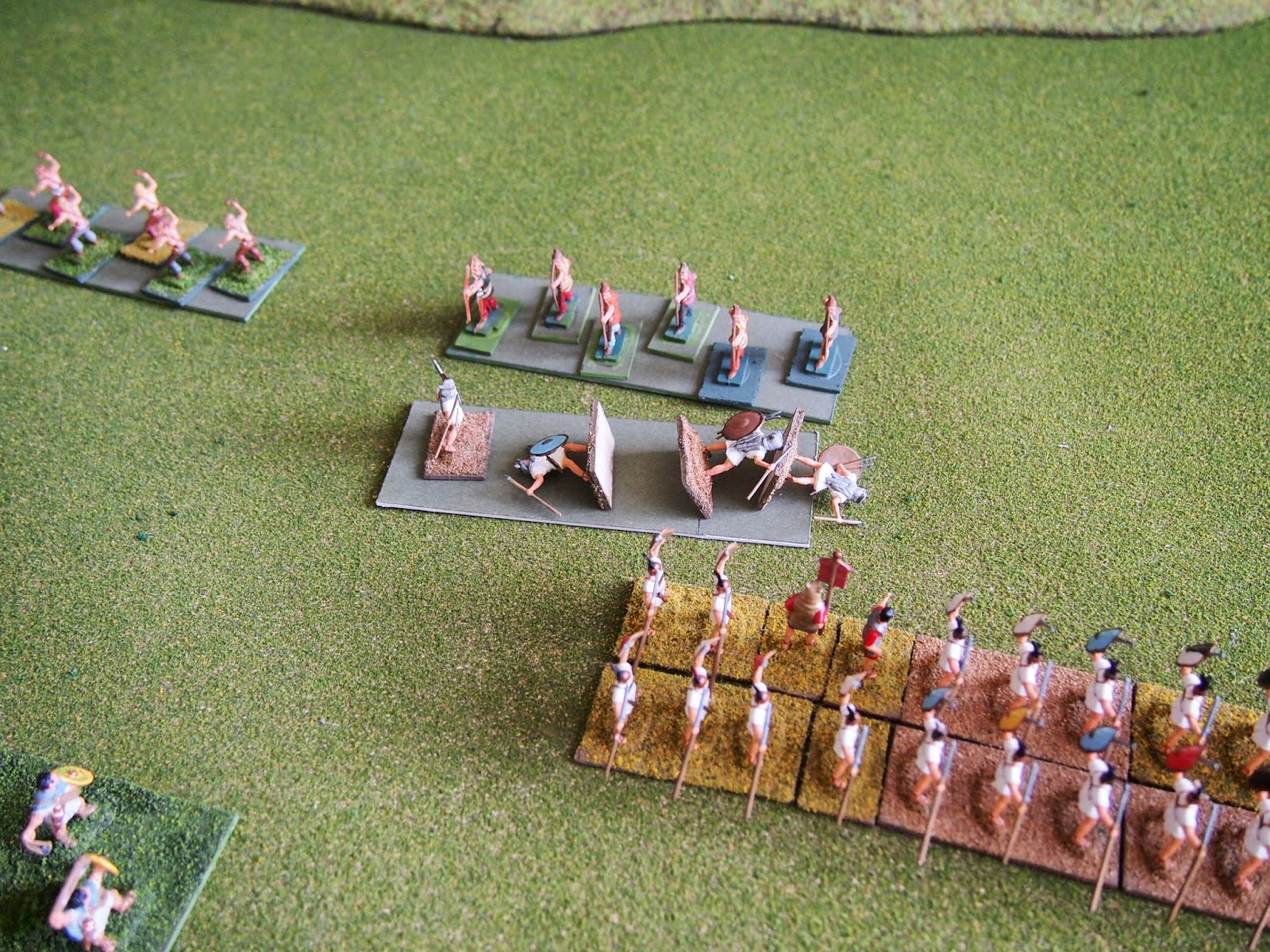 The barbarian slingers were ‘on song’, to the detriment of Longinus’ and Catalus’ velvets. 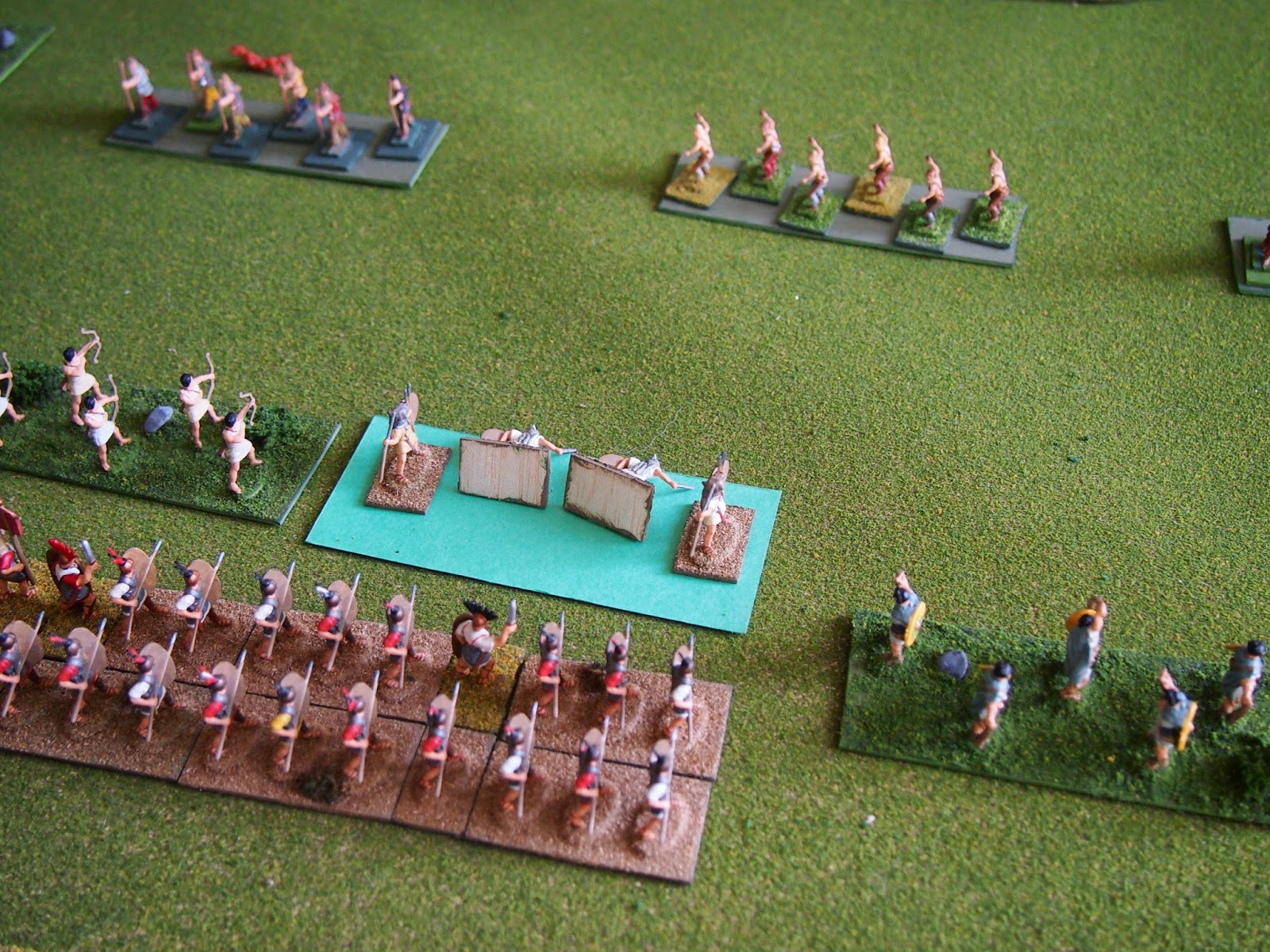 The Roman line advanced; including, this time, Catalus’ men. 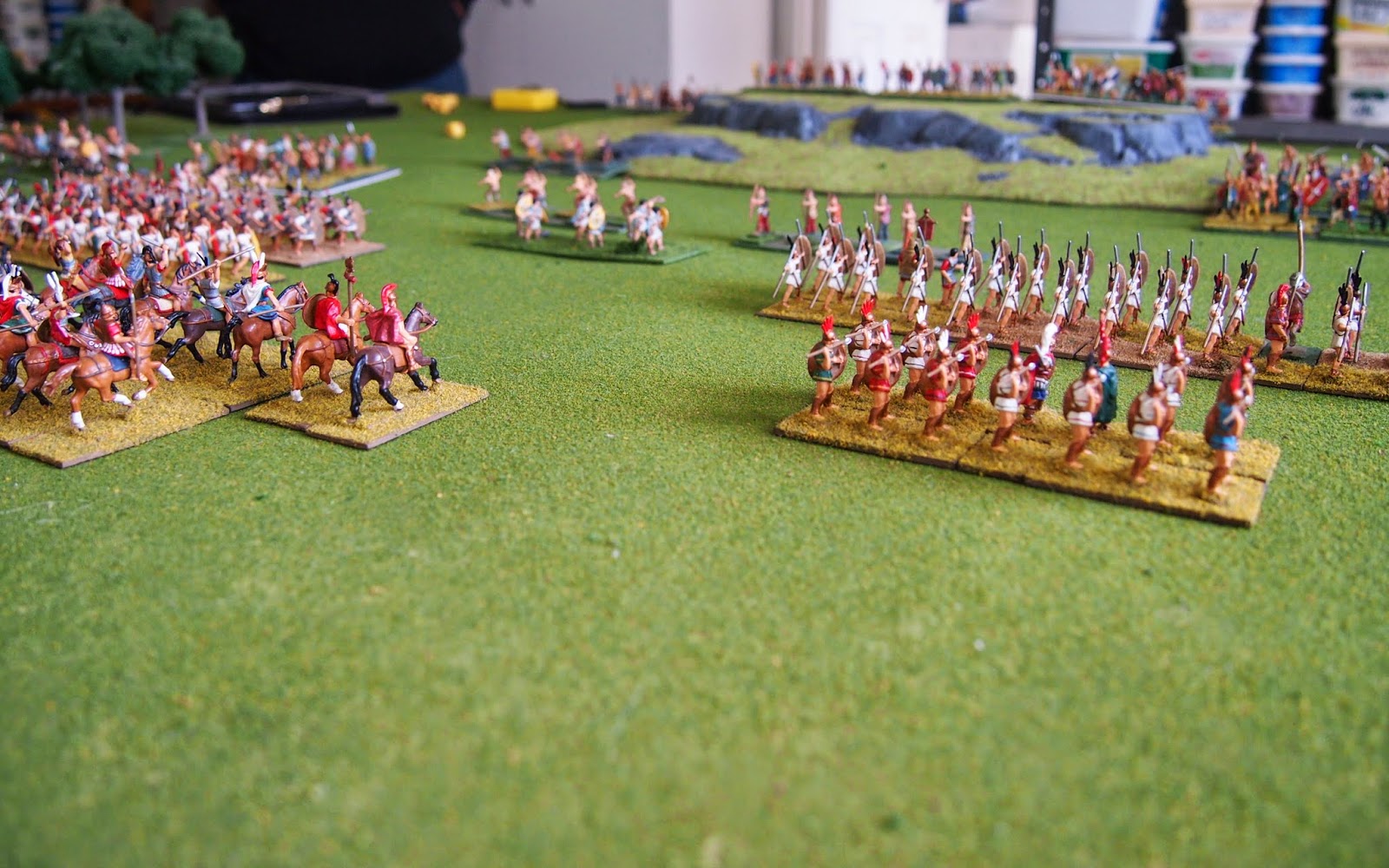 Cagily, Boiorix held the majority of his warbands behind the crest of the hill where, out of sight they controlled their impetuous tendencies. 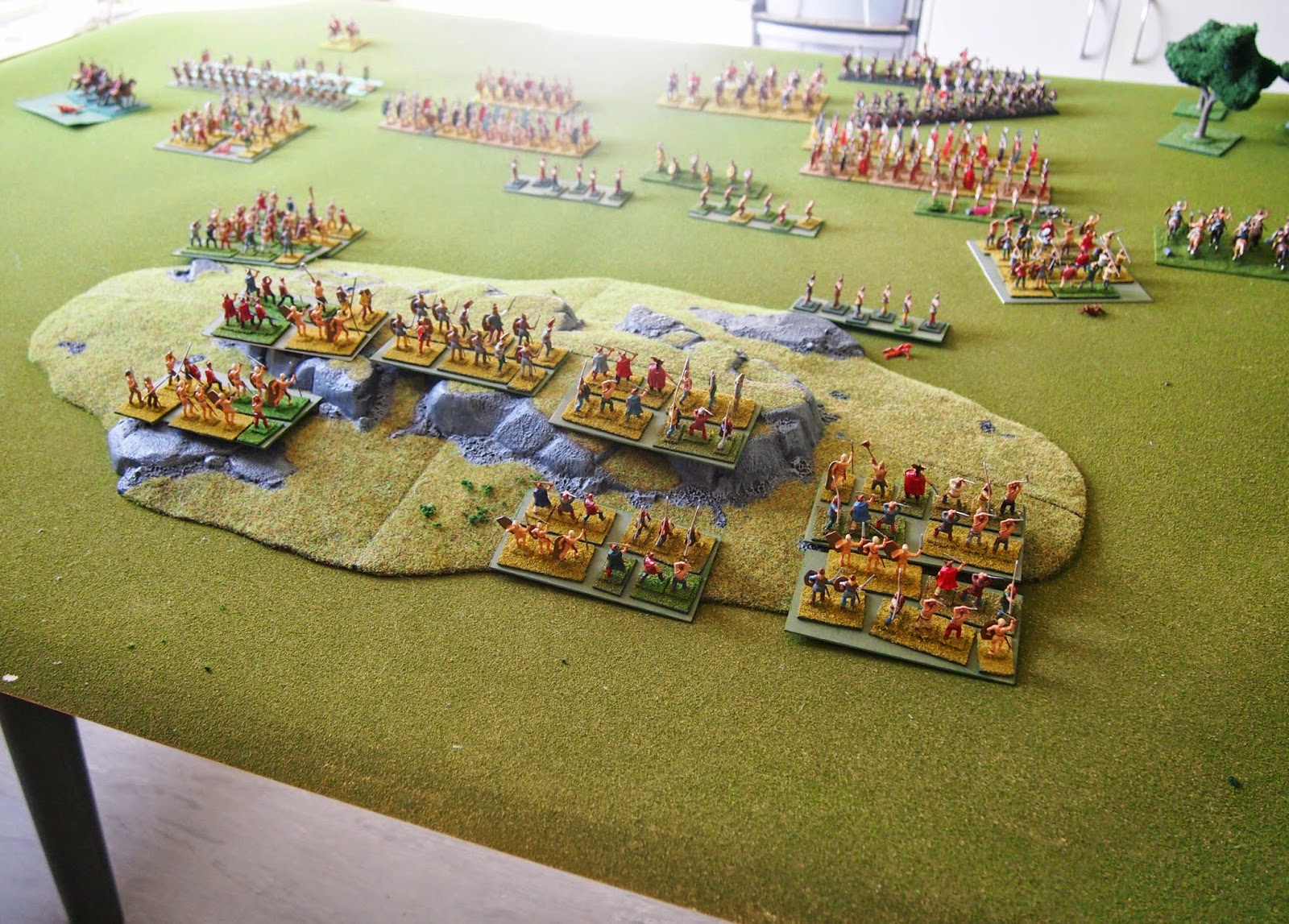 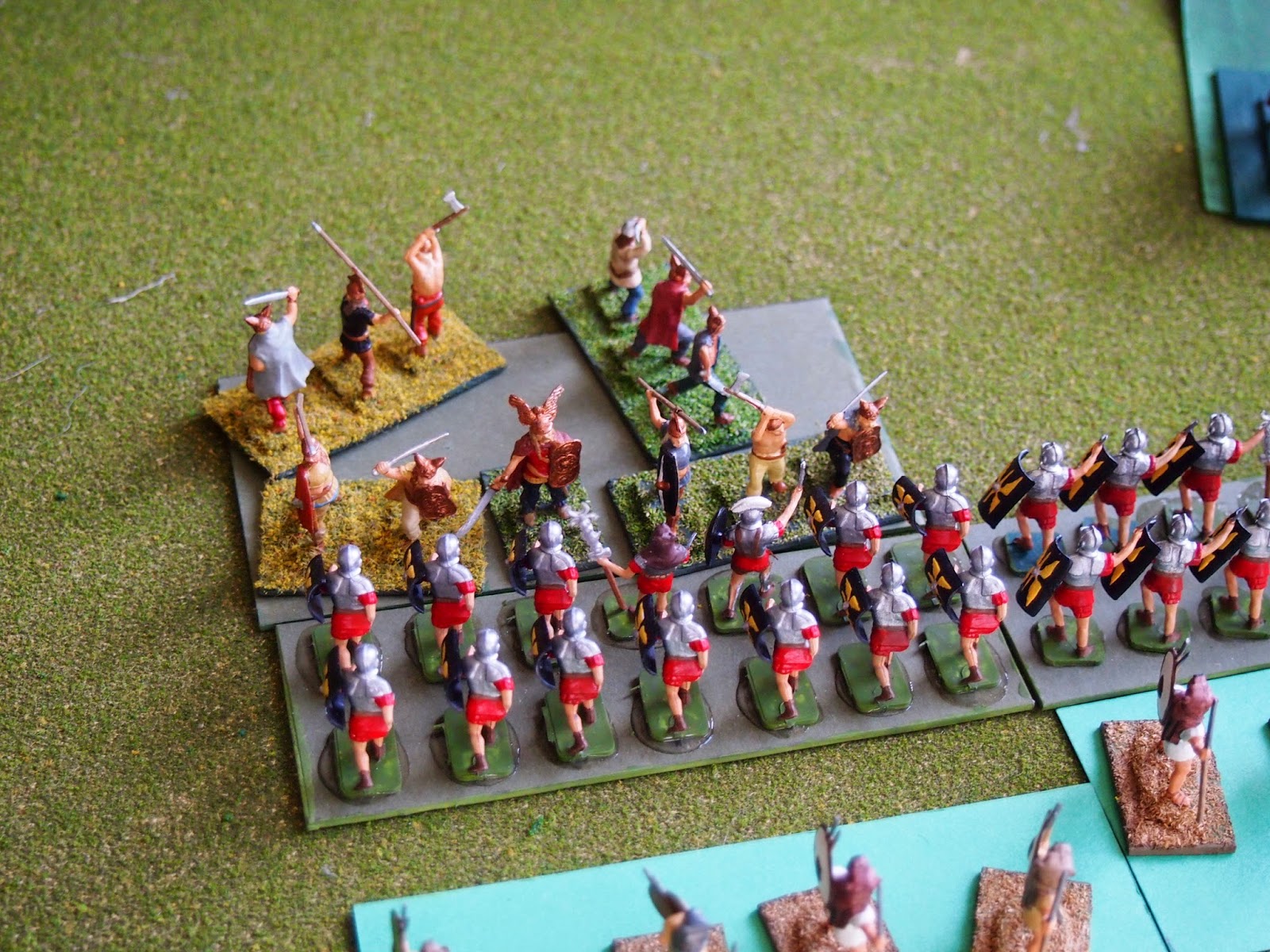 ‘Round two’: Longinus’ men drove off half of the warband, but the lucky Cimbrian cavalry broke their neighbours, who took a unit of velites with them (a die roll of five for permanent losses is not what you want!). That was sufficient to break Longinus’ small command. 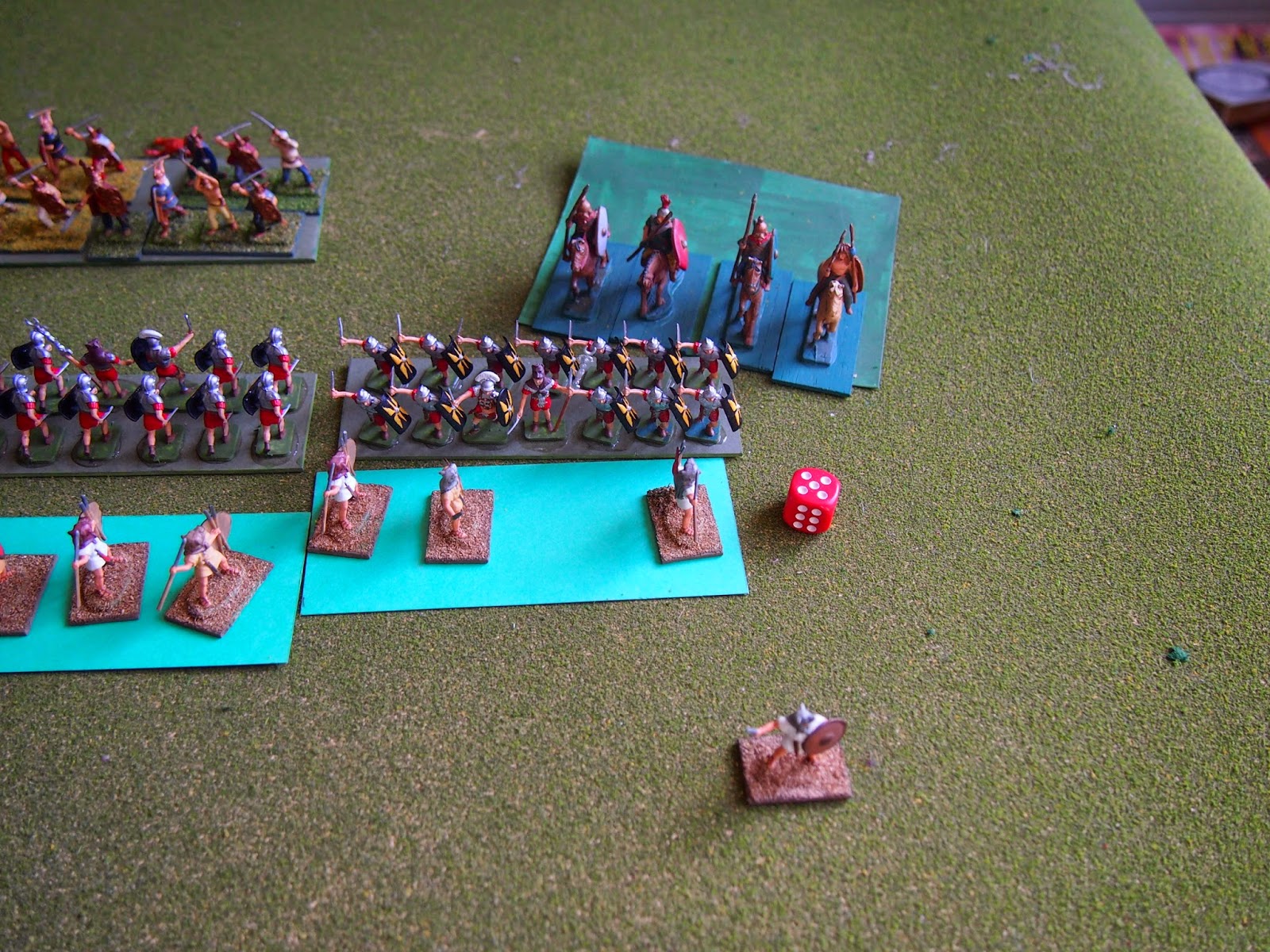 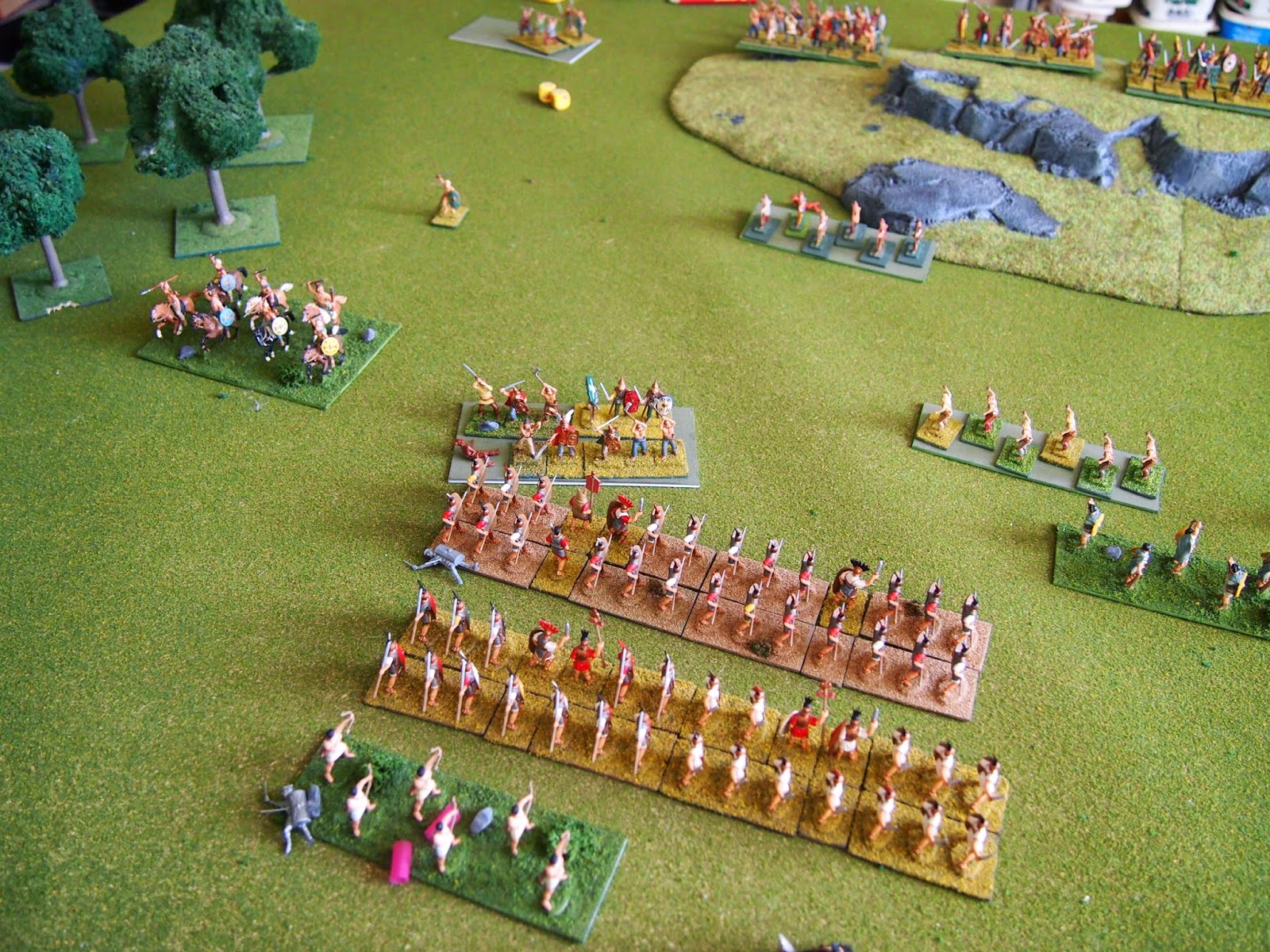 Catalus’ Cretan archers were broken, retreating behind their legionaries from Legio VII, who fought off the right-most Cimbrian war band… 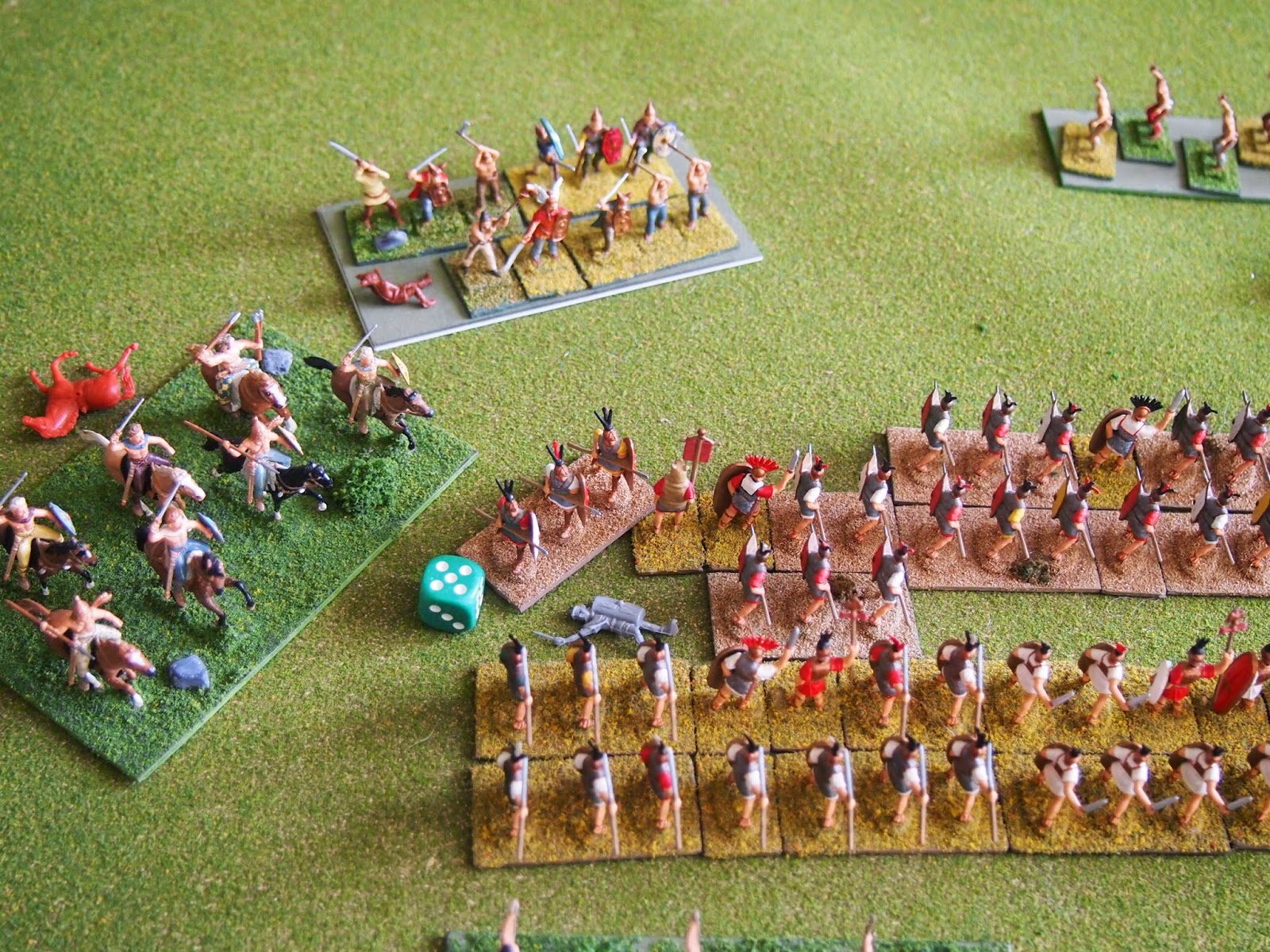 ,only to be broken by a flank attack from their accompanying cavalry. The Cimbrian horsemen pursued, becoming entangled in mêlée with part of Legio VIII. 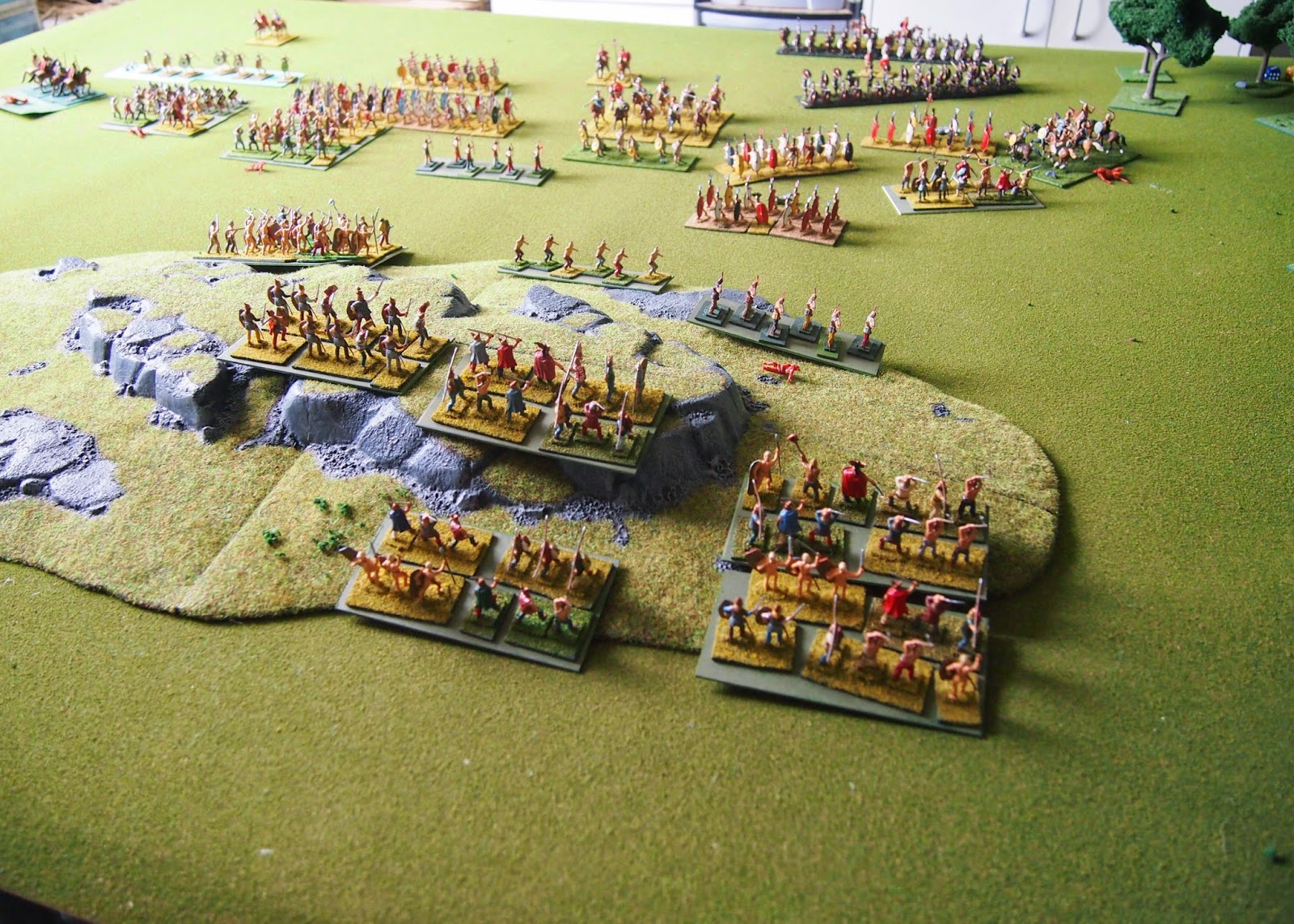 The battle was on a knife-edge. Sensing his chance, Boiorix sent forward more of his warbands (above and below). 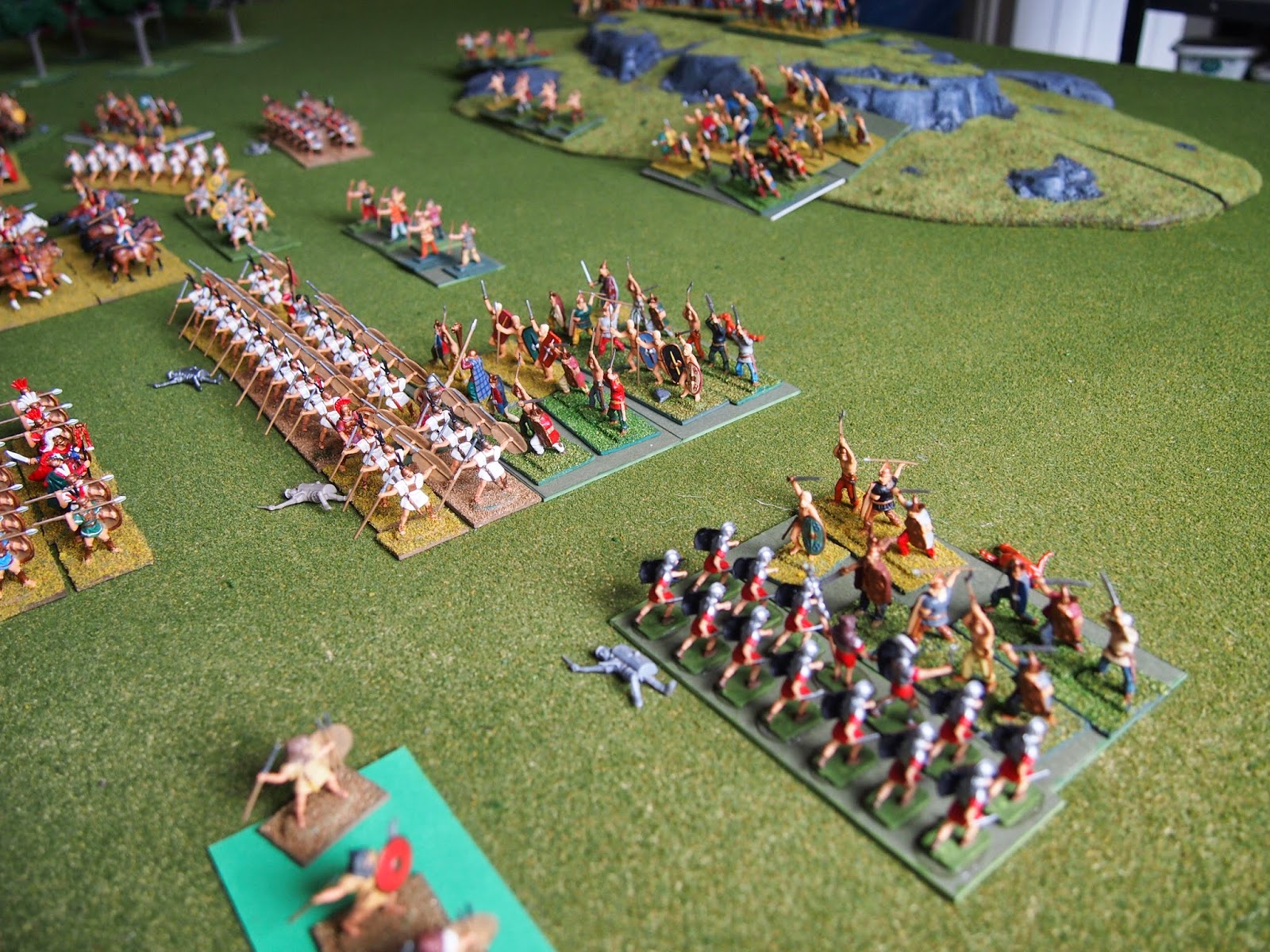 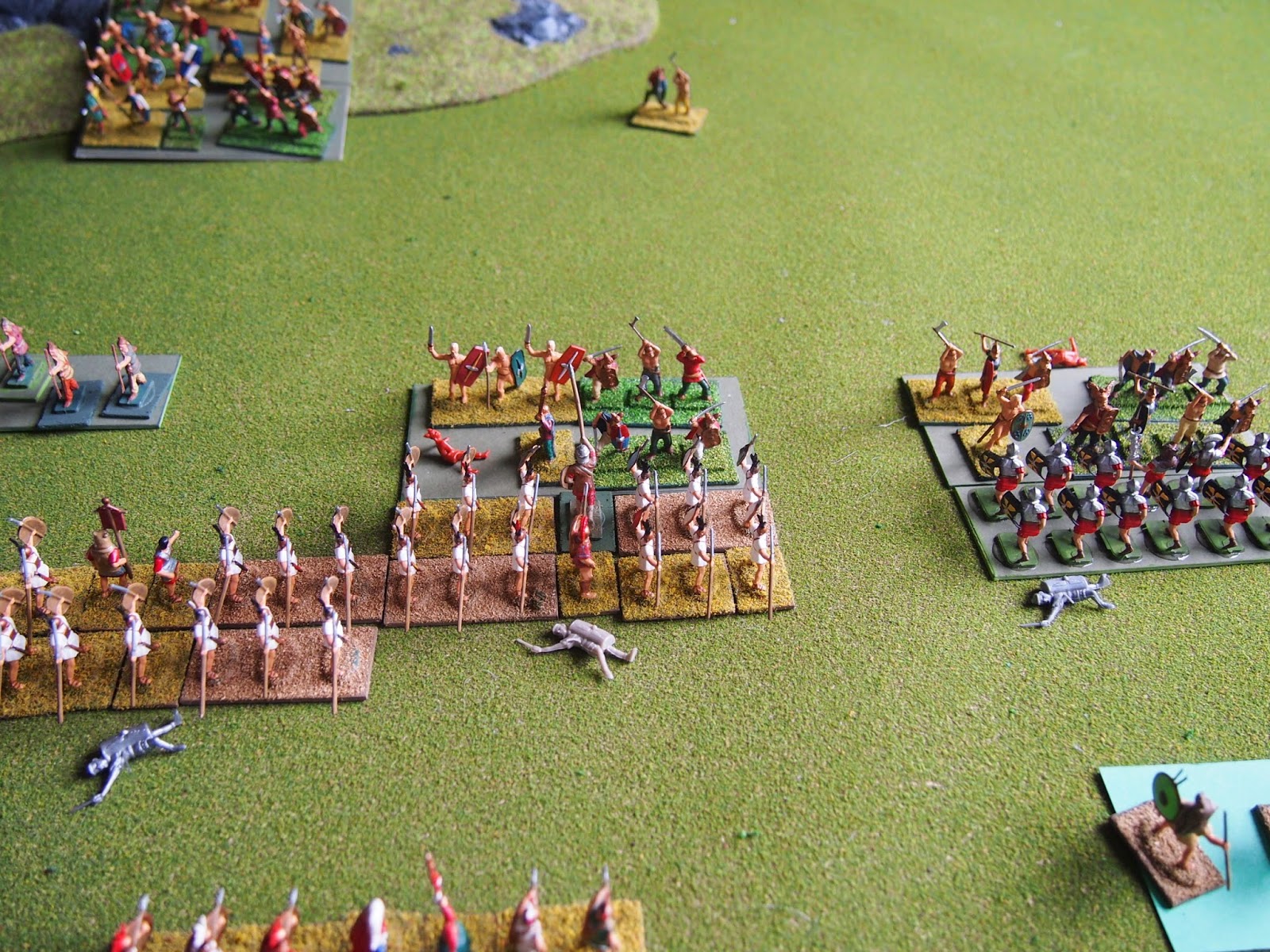 On the Roman right, the legionaries and warbands were in protracted mêlées. 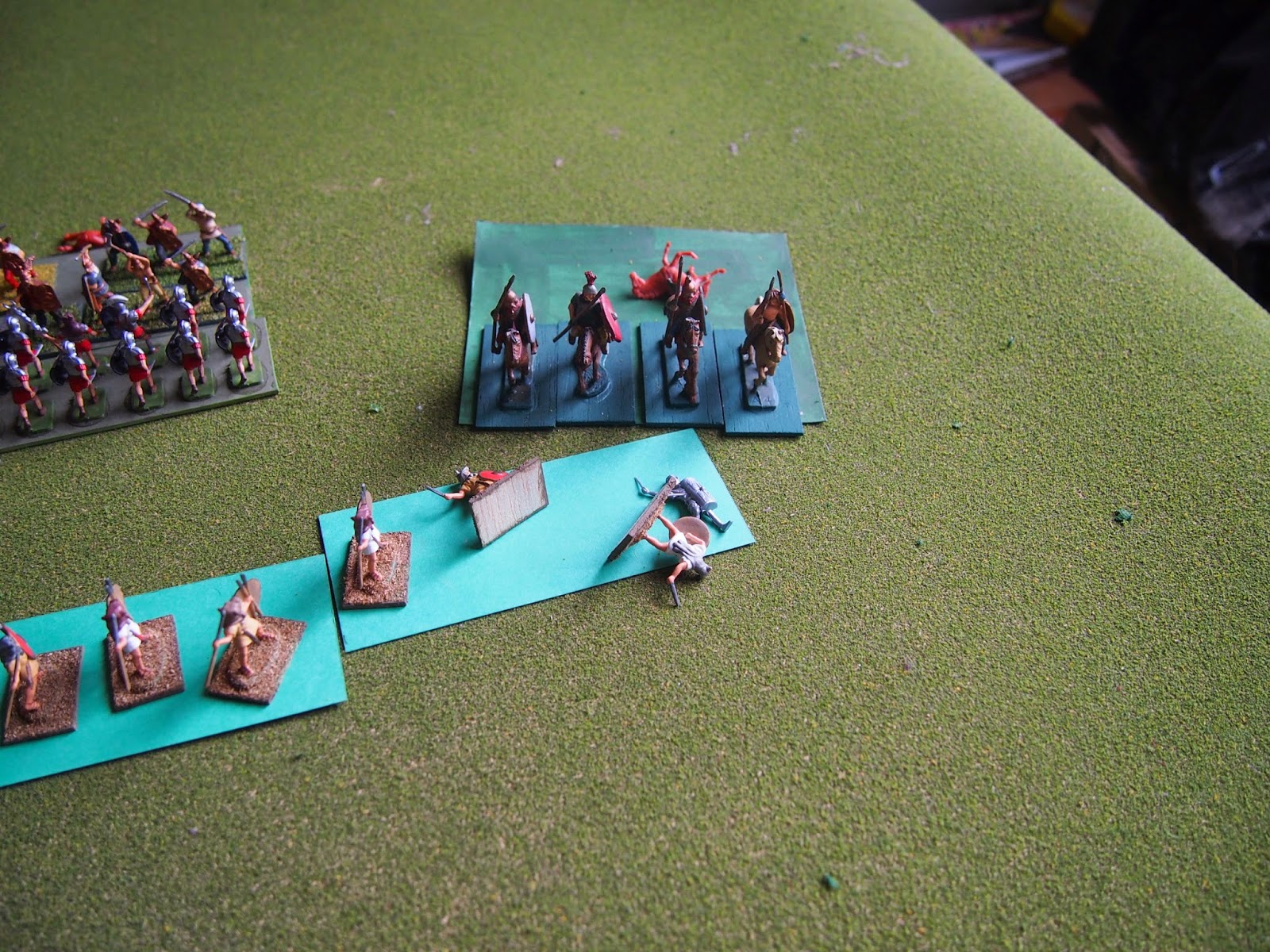 While on the extreme right, the Cimbrian cavalry over-ran Silanus’ velites.

Over on the Roman left, the ‘unit’ of Legio VIII was defeated by the Cimbrian horsemen (not shown). This was sufficient to ‘break’ Catalus’ command. 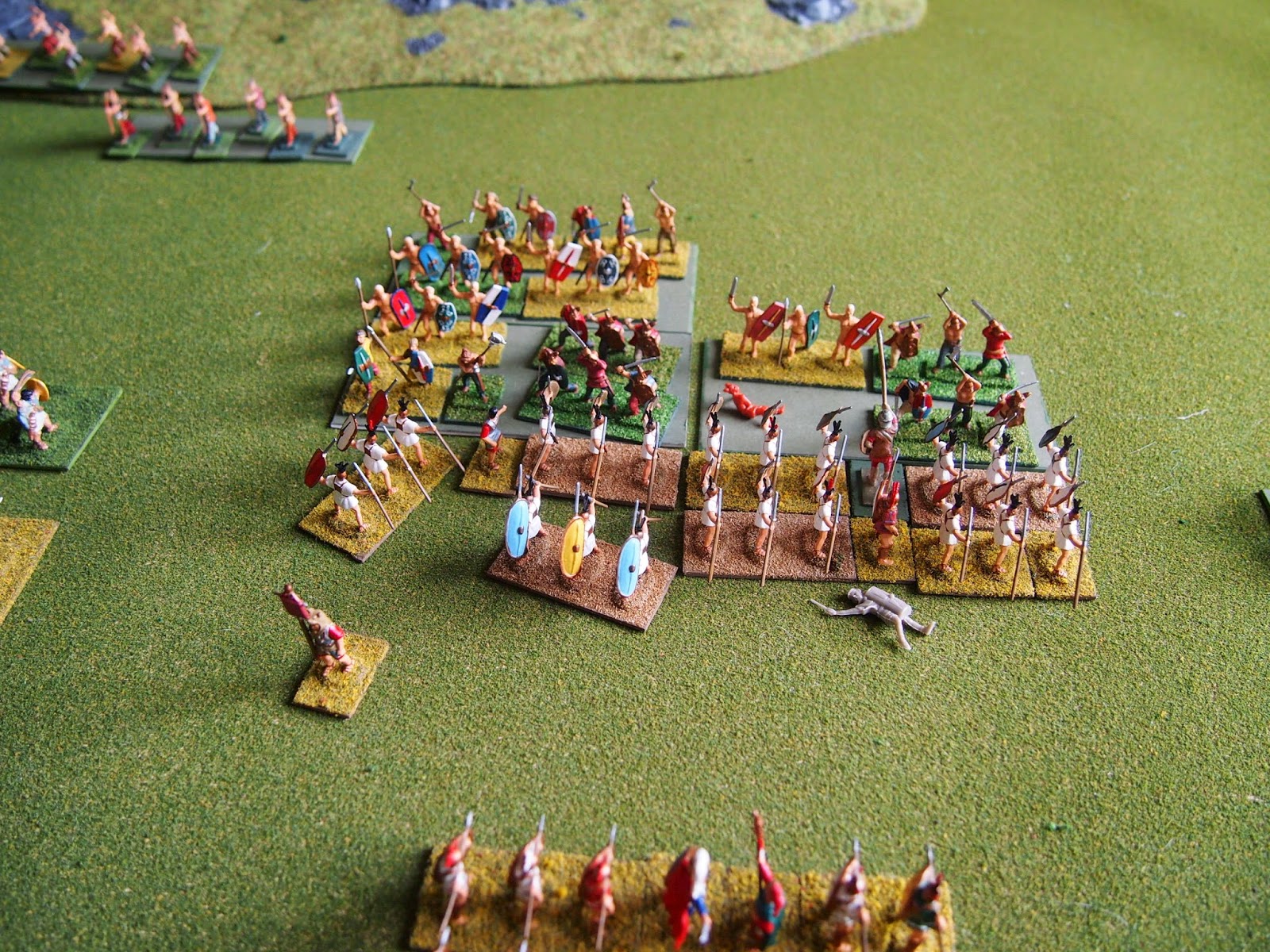 The defeat of one of Silanus’ legions was the final straw for the Romans. 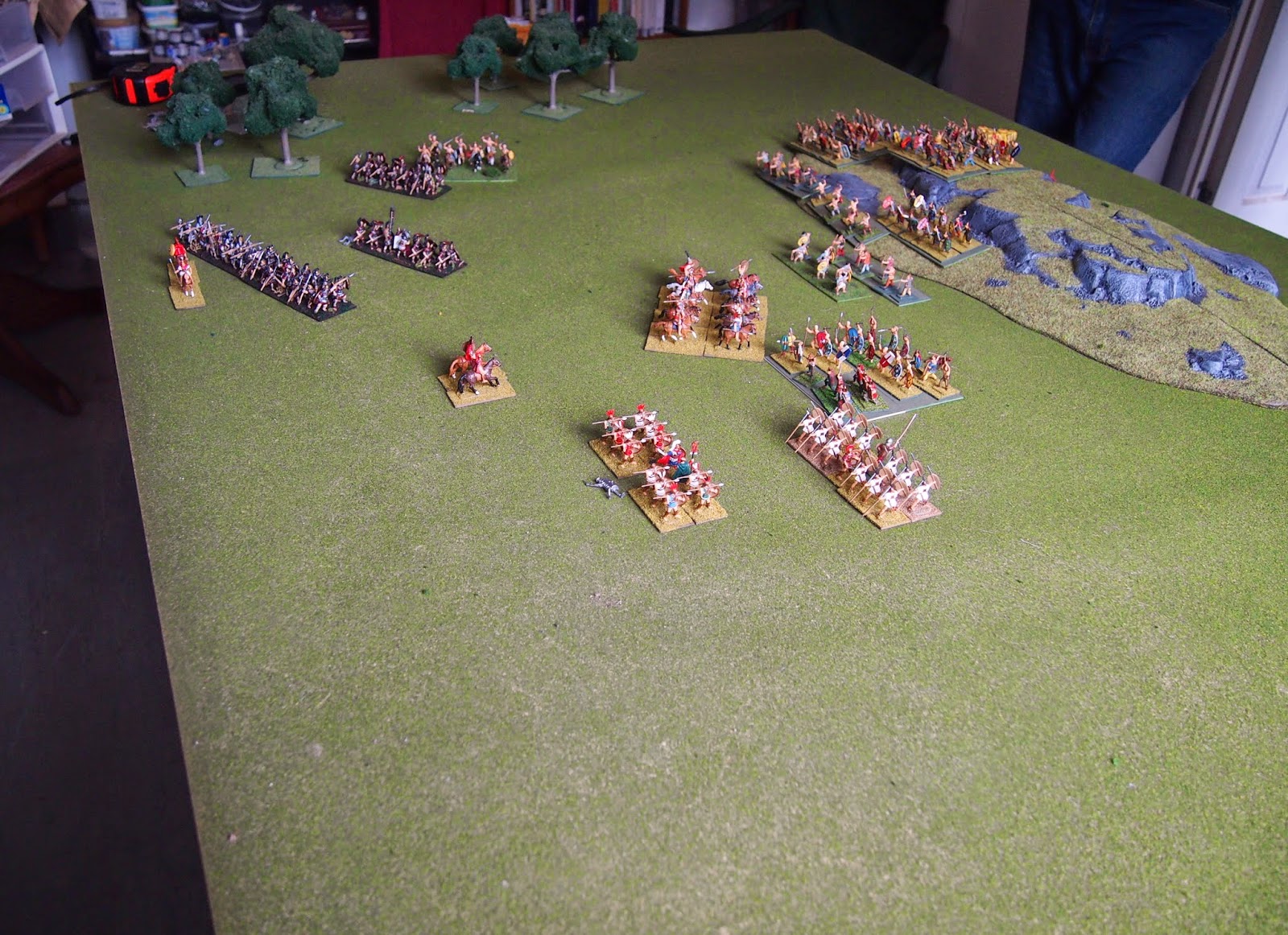 The battle over, Boiorix released his remaining warbands. 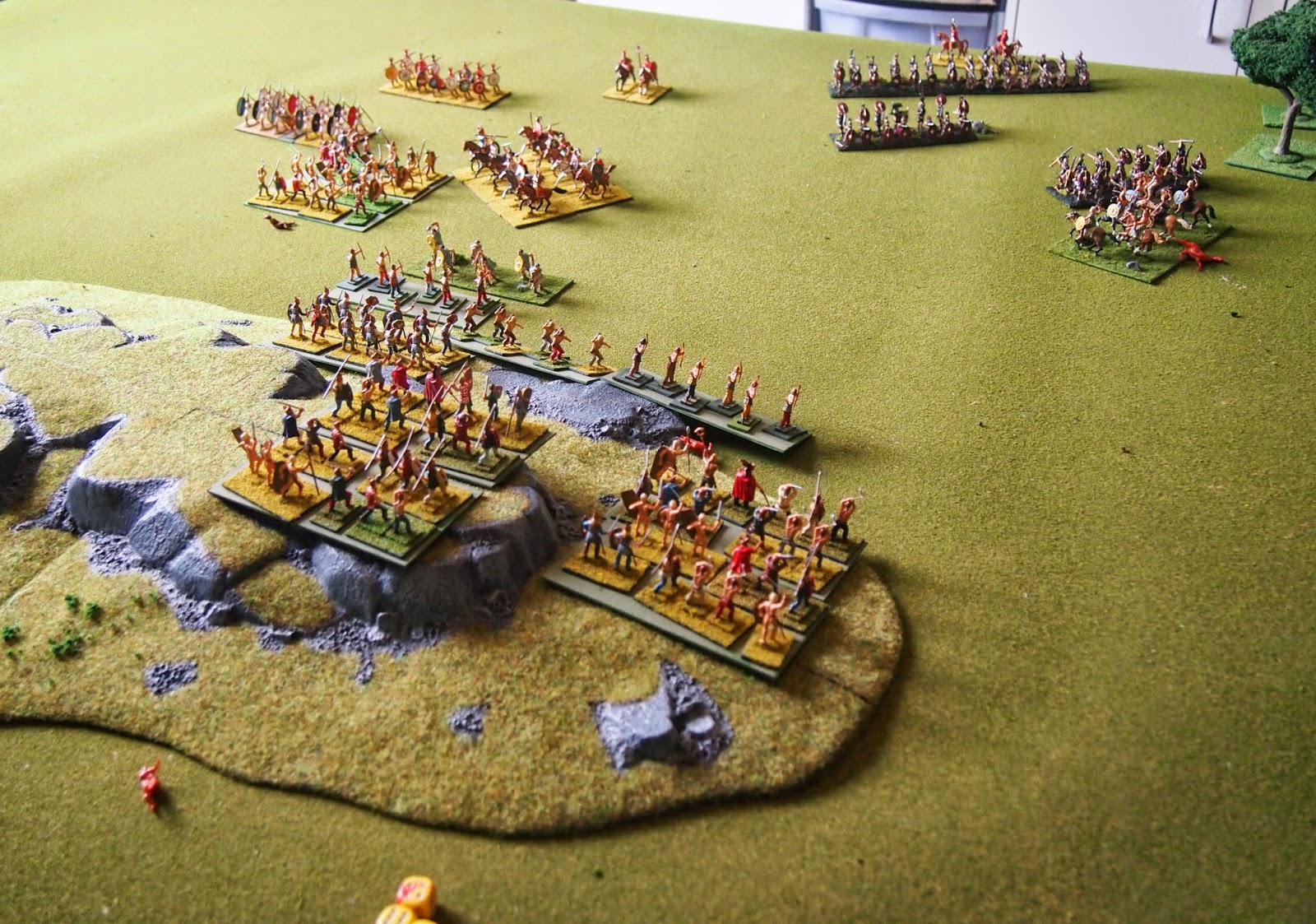 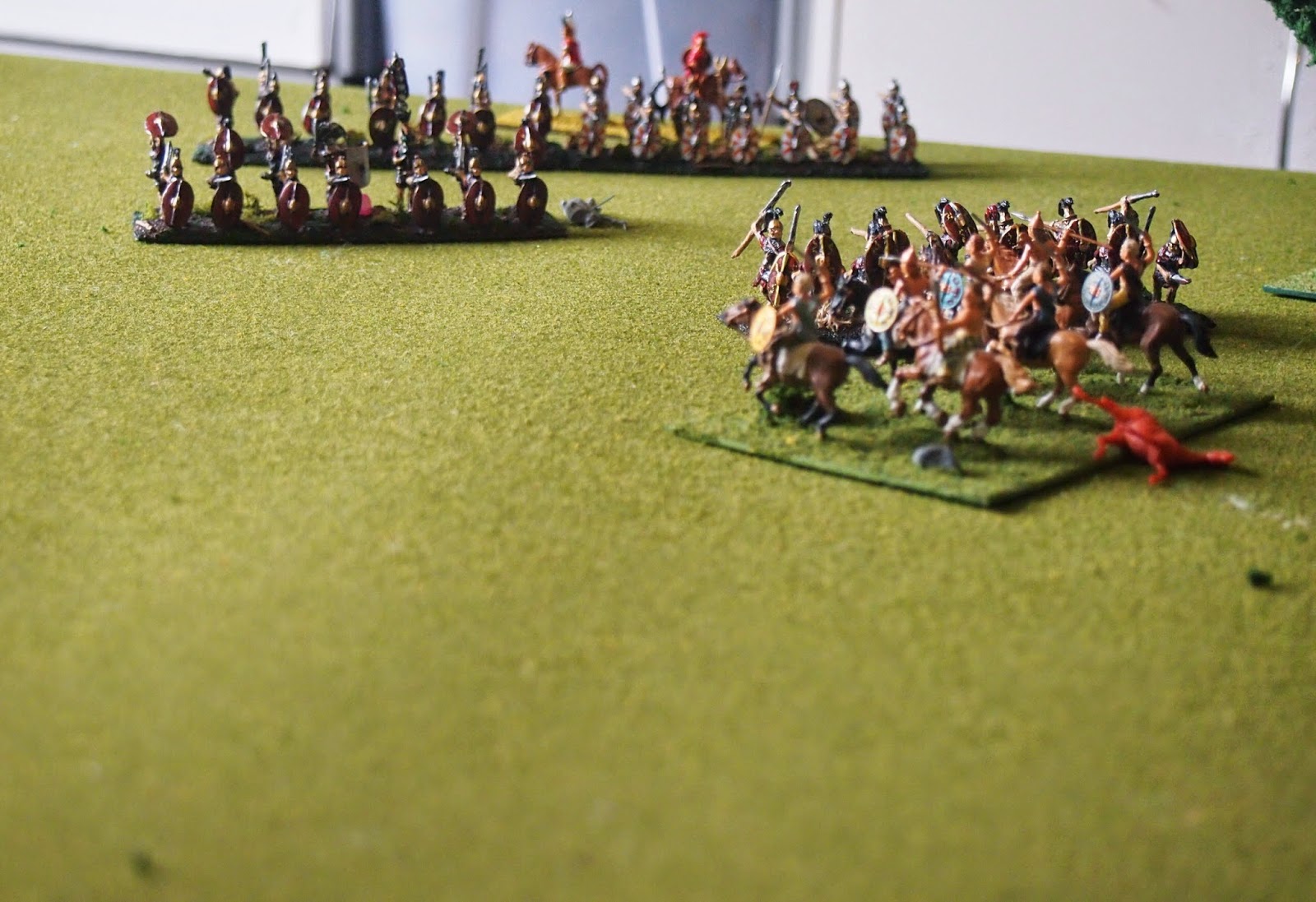 For the Romans, only Marius’ and Silanus’ commands remained to cover the army's retreat. 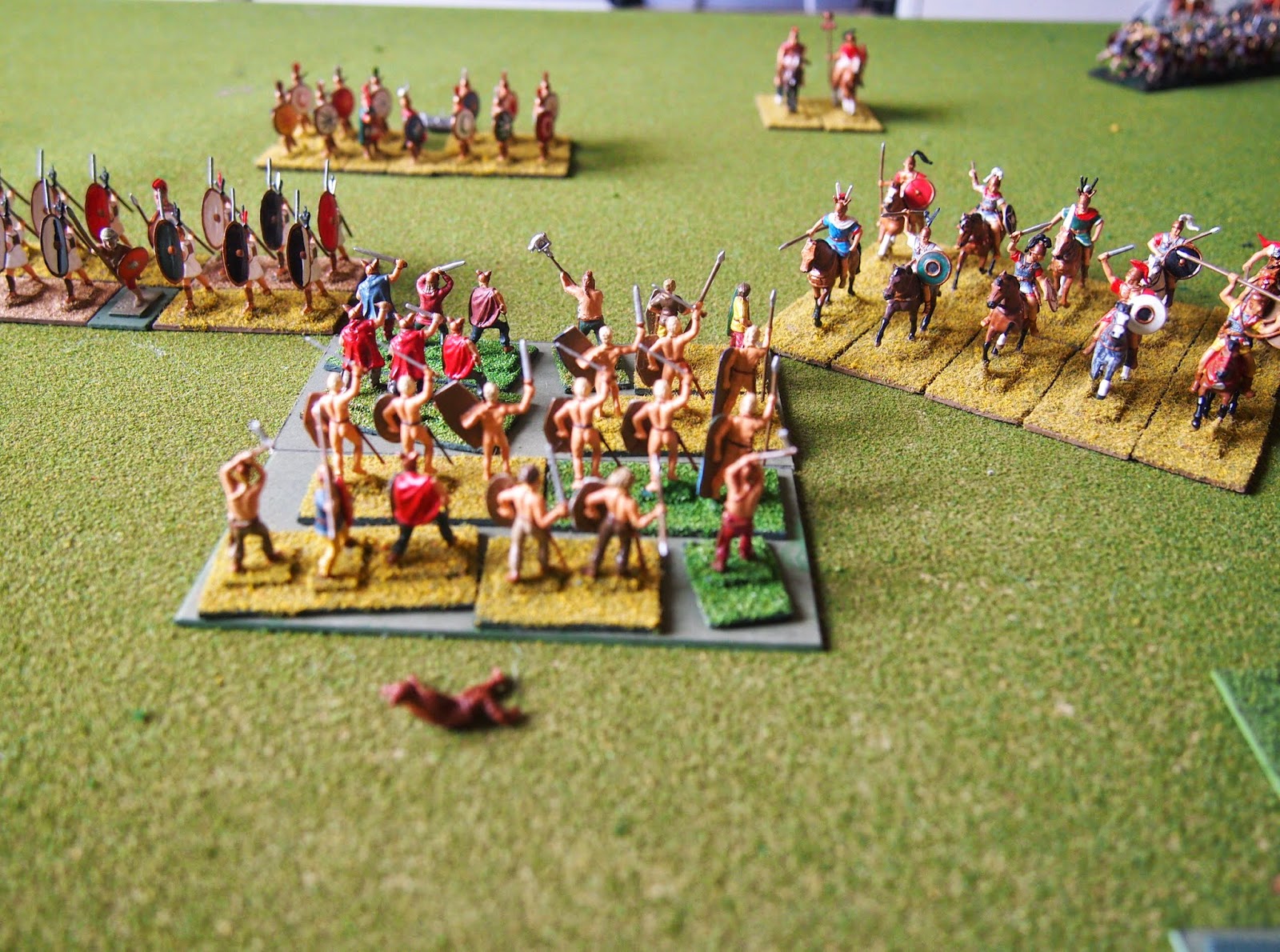 It had been a near run thing, but nonetheless another defeat for Rome. Both sides lost 16 points of VBU, so the game was a draw—a losing draw for the Romans—resulting in 10% permanent losses for each side.

That’s two losing draws in a row. Things looking up for Rome?!
Posted by James Fisher at 00:12