Battle of Arausio, 105 BC (fictional)

This was the first game from a mini-campaign based on the latter years (105–101 BC) of the wars between Rome and the migrating Cimbri and Teutones (113–101 BC). The background and rules for the campaign come from Ben Yates' article in Miniature Wargames Issue 209, October 2000. This excellent article discusses the historical background to the campaign and provides all the resources necessary to play the campaign yourself.

We are using the rules directly ‘out of the mag’, with the addition of two ‘house’ rules regarding the quality of Roman legions and translation of battle losses into permanent casualties. These have allowed us to adapt Yates’ campaign rules for use with Impetus tabletop rules (since his were written with DBM in mind).

Quality of Roman Legions
The Roman legions begin the campaign untrained. Legions receive training points by remaining in camp to train or by facing barbarians without a battle. A legion receives three training points for each campaign turn (month) that it remains in camp up to a maximum of six.

A legion receives four training points if it is part of an army that deploys for battle with barbarians without a battle occurring. That is, if the Roman army encounters barbarians in a region, but the barbarian response (as determined by the procedure in Ben Yates’ article) is to withdraw from battle. Once a legion reaches a total of 11 training points, it is considered to be fully trained for the remainder of the campaign.

If a Roman army is involved in a tabletop battle, the quality of each legion is determined by the draw of a card, according to the procedure in Ben Yates’ article. A card is drawn for each legion when the army deploys and is left, face down beside each legion until it is involved in mêlée. At that time, the card is turned over and the quality of the legion is determined based on the current training level of the legion and the suit and face value of the card (if greater than training level the quality is read from the untrained column). This leads to some interesting surprises!

Fiction mimics history
Our first battle of the campaign took place in the region of Arausio. We did not realise it until later, but the Battle of Arausio, (6th October, 105 BC) was the worst defeat of a Roman army since Cannae. In the real thing, the Cimbri and the Teutoni, under Boiorix, and King Teutobod respectively, all but destroyed the armies of consul Gnaeus Mallius Maximus and proconsul Quintus Servilius Caepio.

In our version, played on 18th April, I’d assigned the Romans to Marcus Junius Silanus and Lucius Cassius Longinus, but the outcome at the hands of the Cimbri and Teutones was remarkably similar to the history… 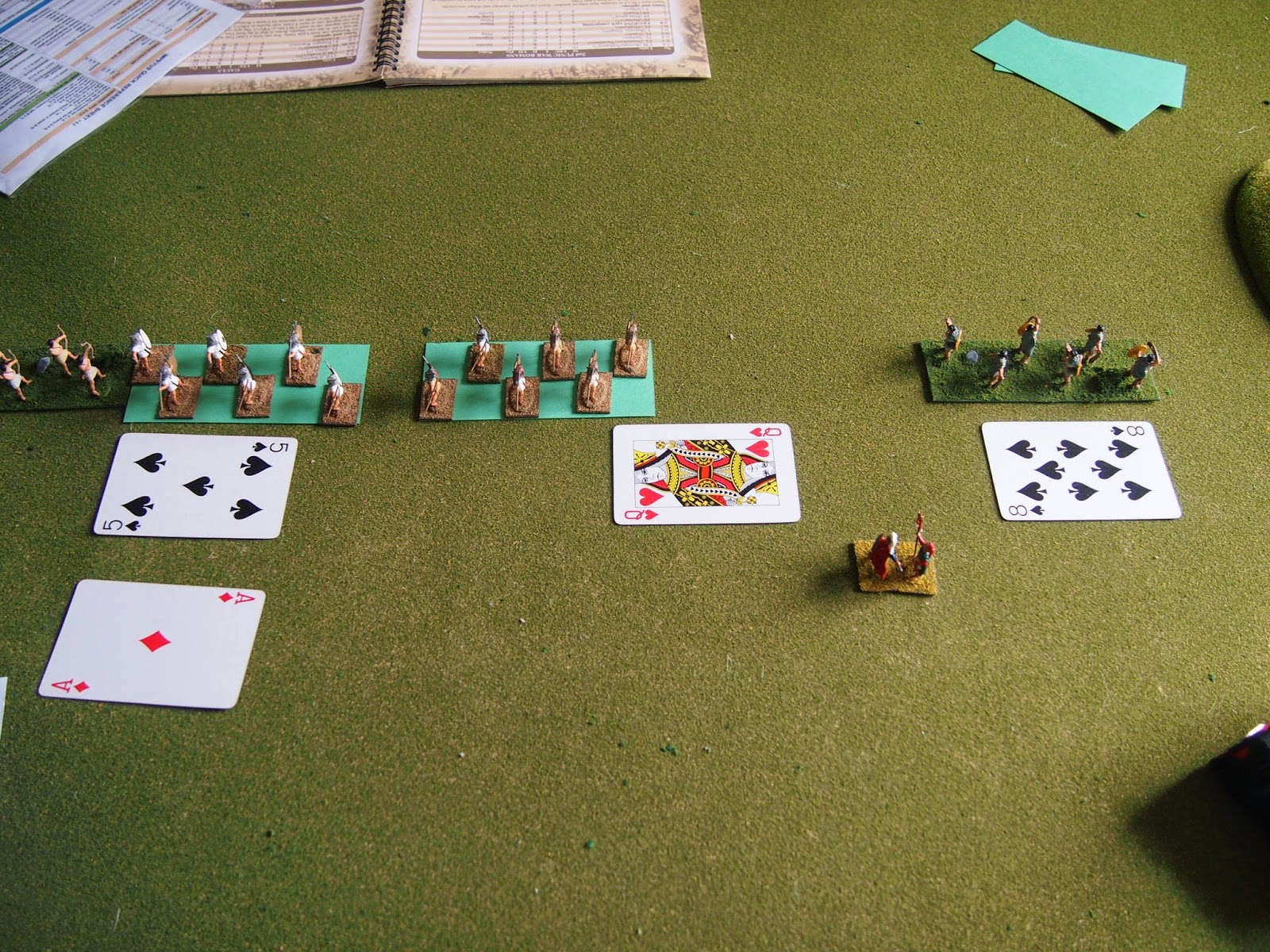 Cards indicating the quality of the Romans (I'd mis-read the rules and turned them over at the beginning of the game). Diamonds are the second highest classification, but spades are the lowest. A Jack and eight mean that the two units involved receive their unit ratings from the 'untrained' column. 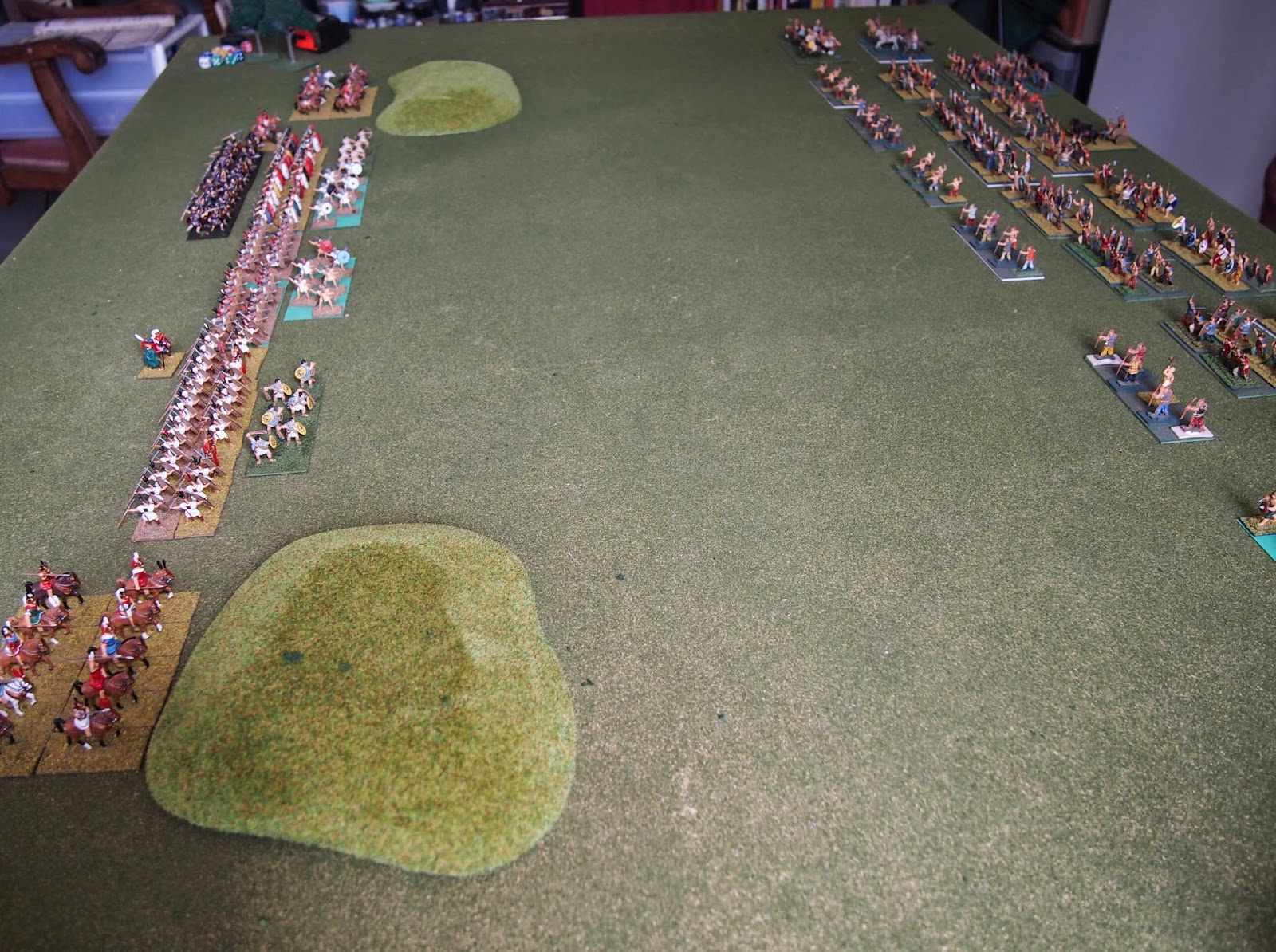 Romans on the left, facing some but not all of the Germans on the right (i.e. more are yet to be deployed). The terrain card drawn lead to a position between two small hills. 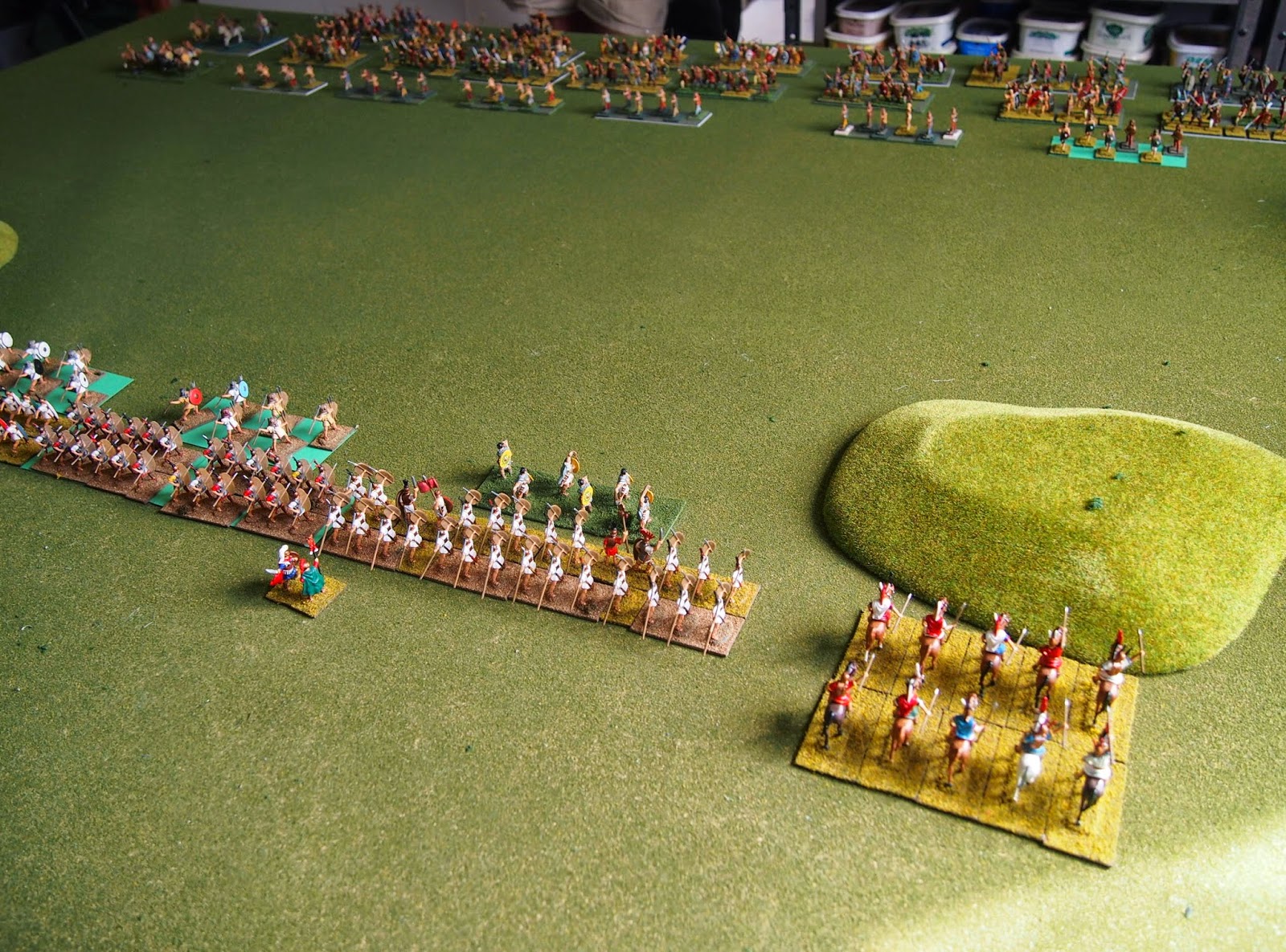 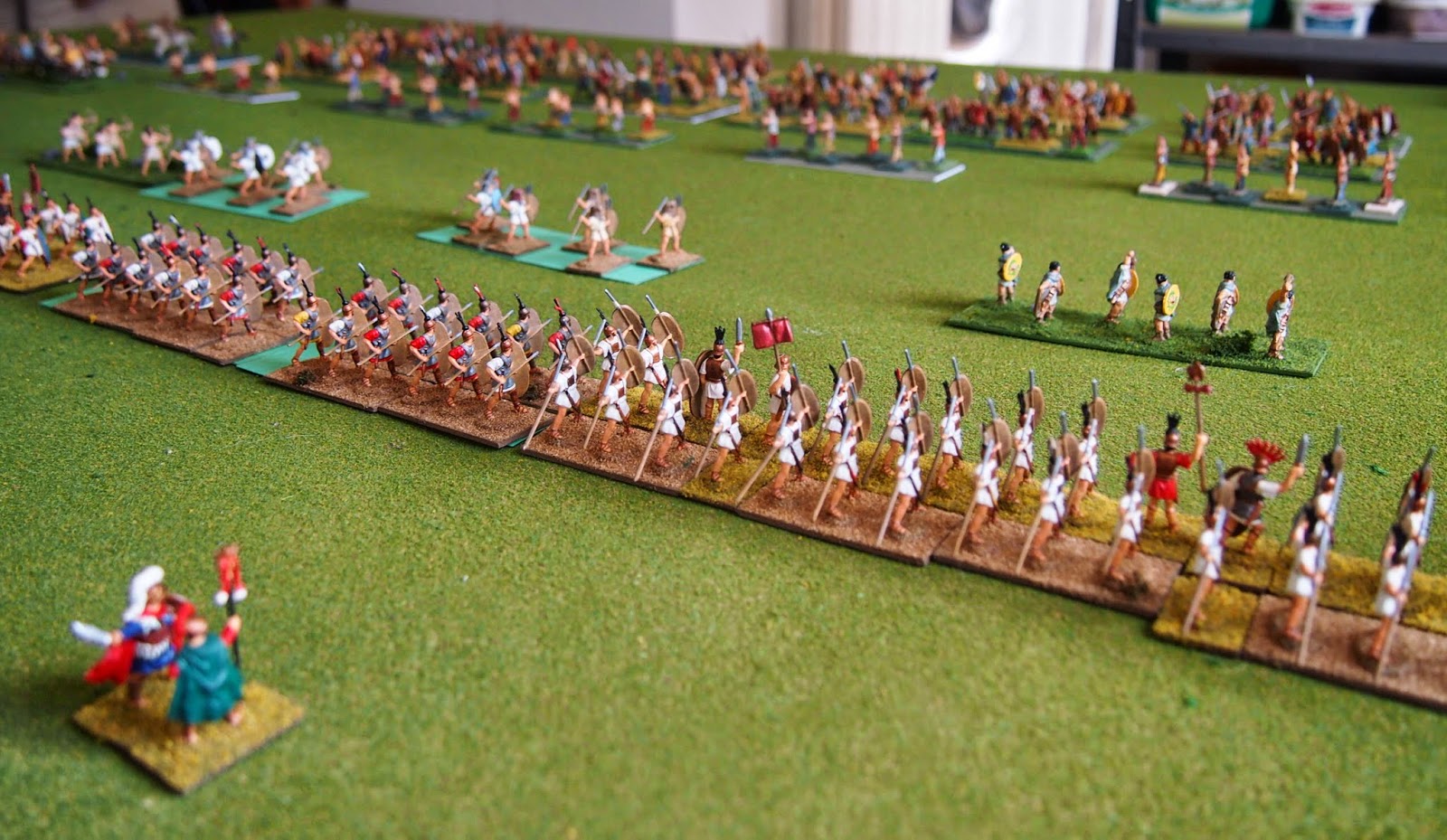 with his legions arrayed in a single line.

What a lot of barbarians! 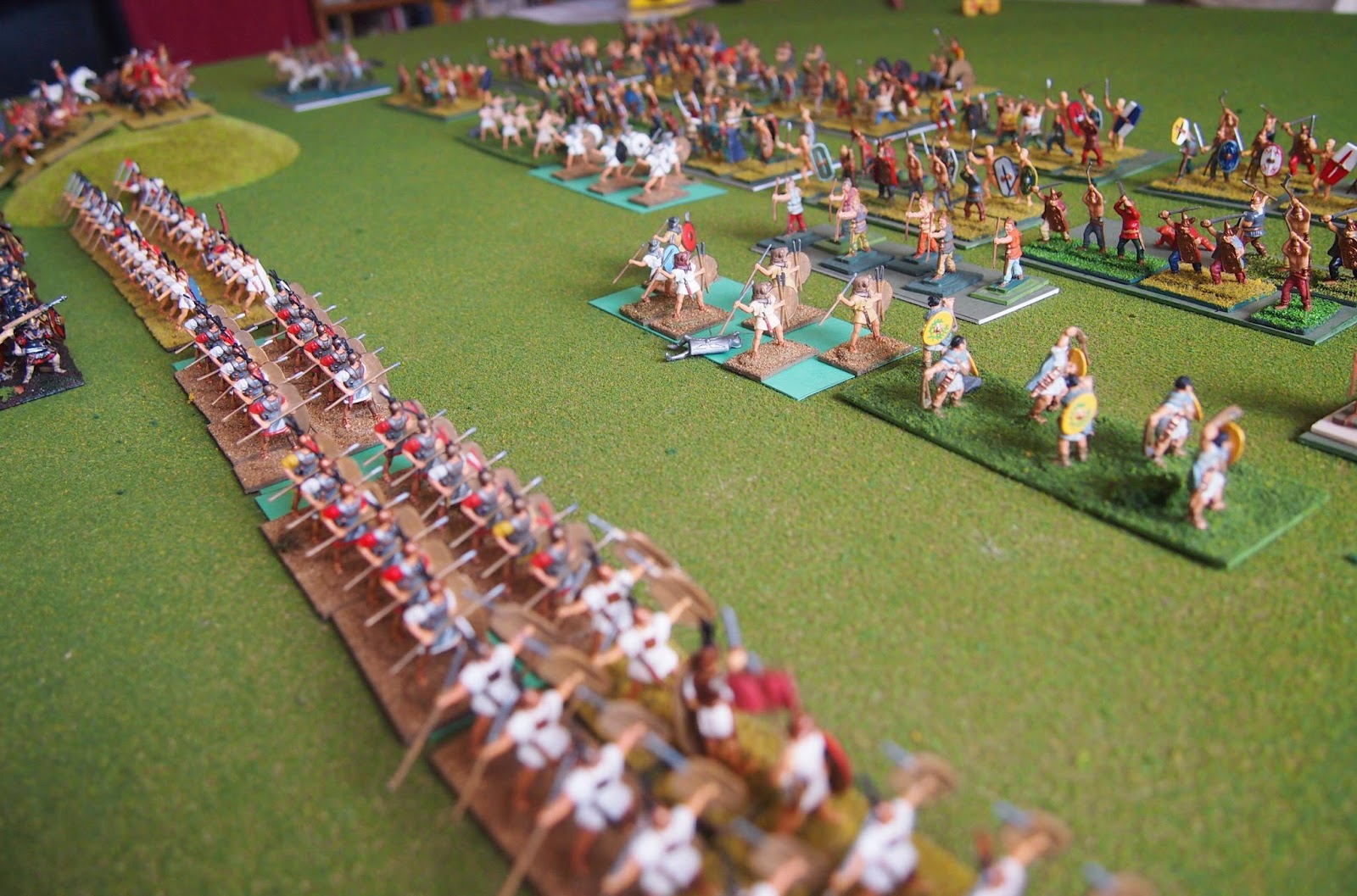 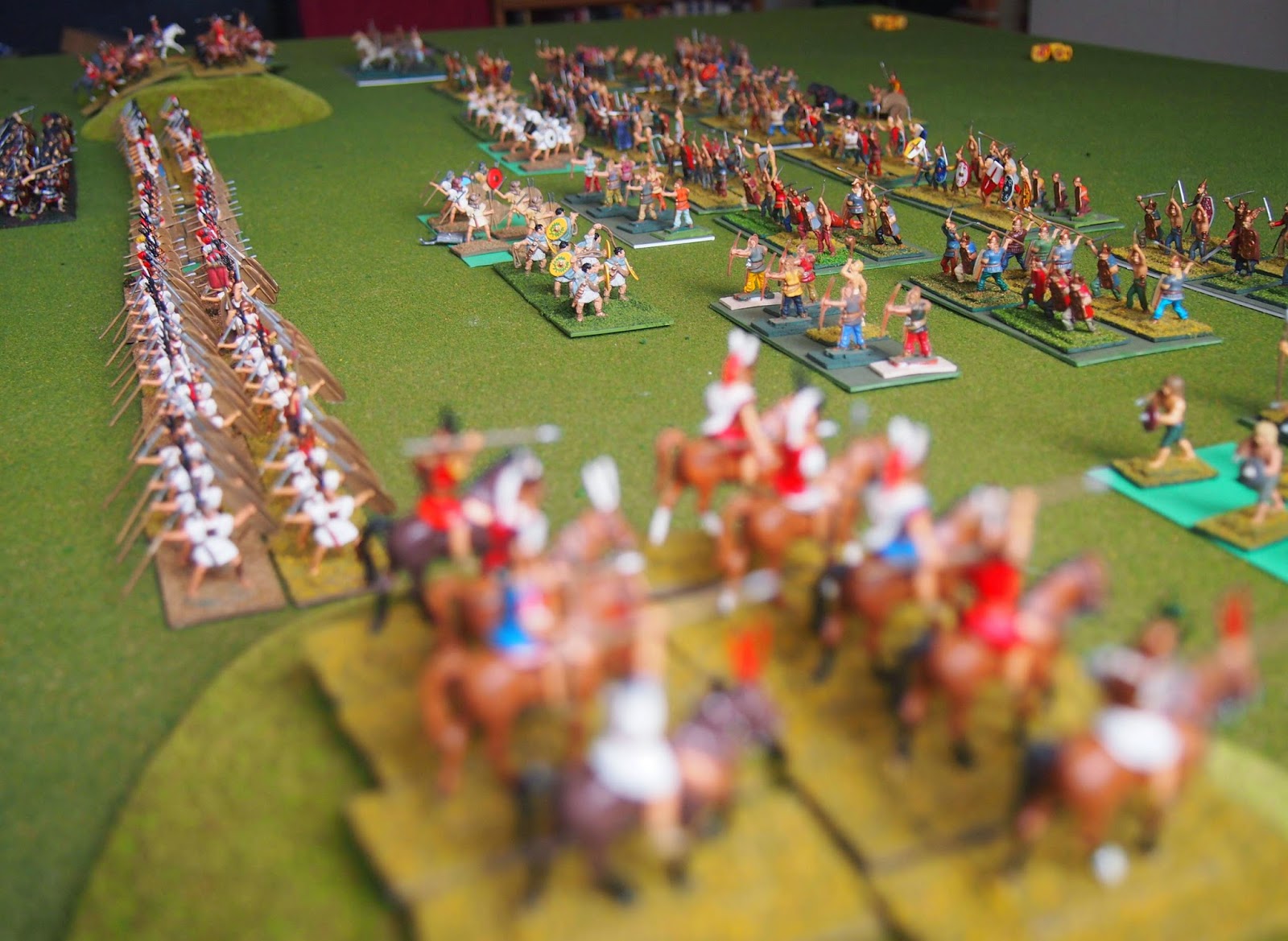 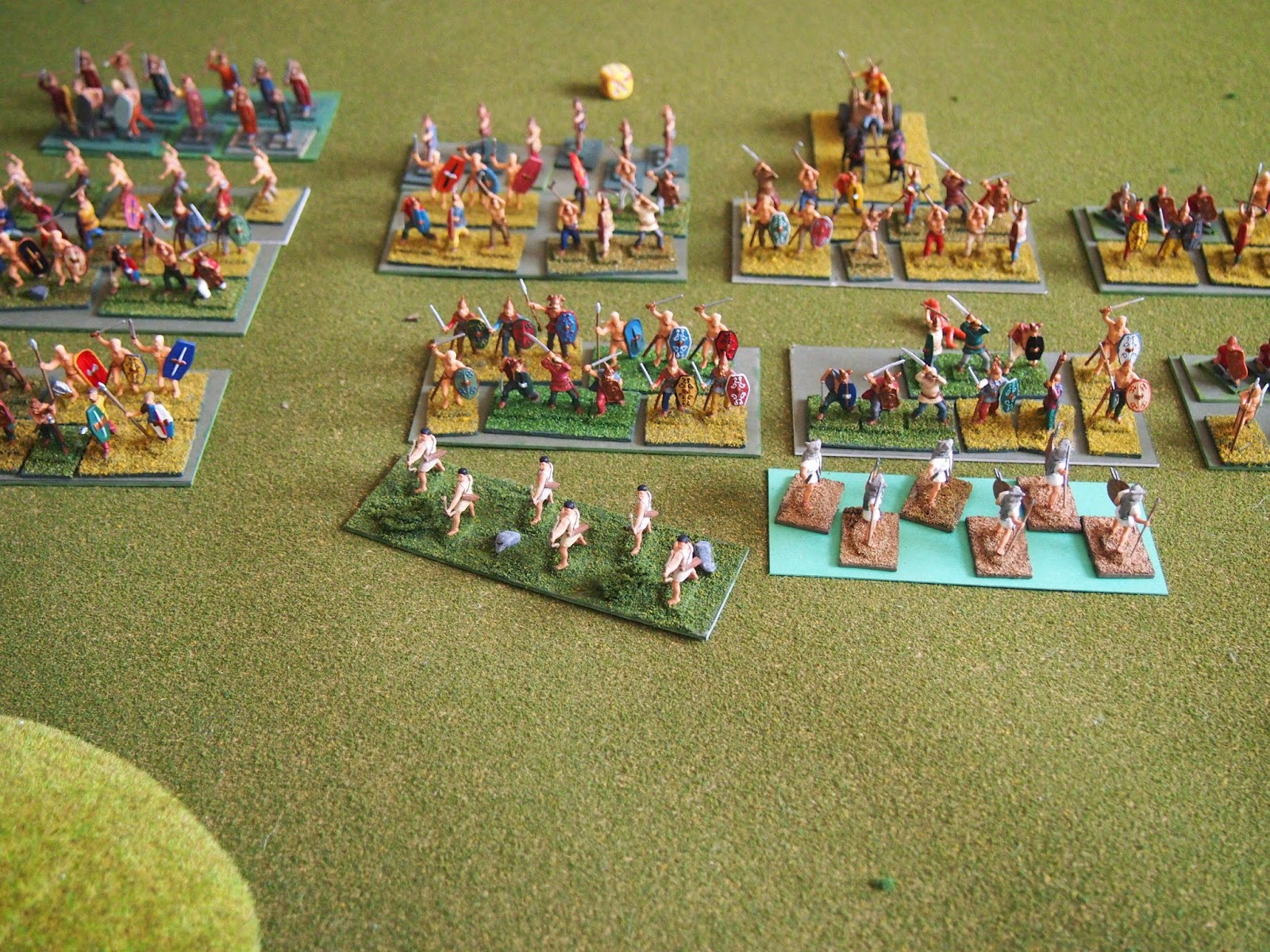 easily pushing aside the Roman skirmishers, 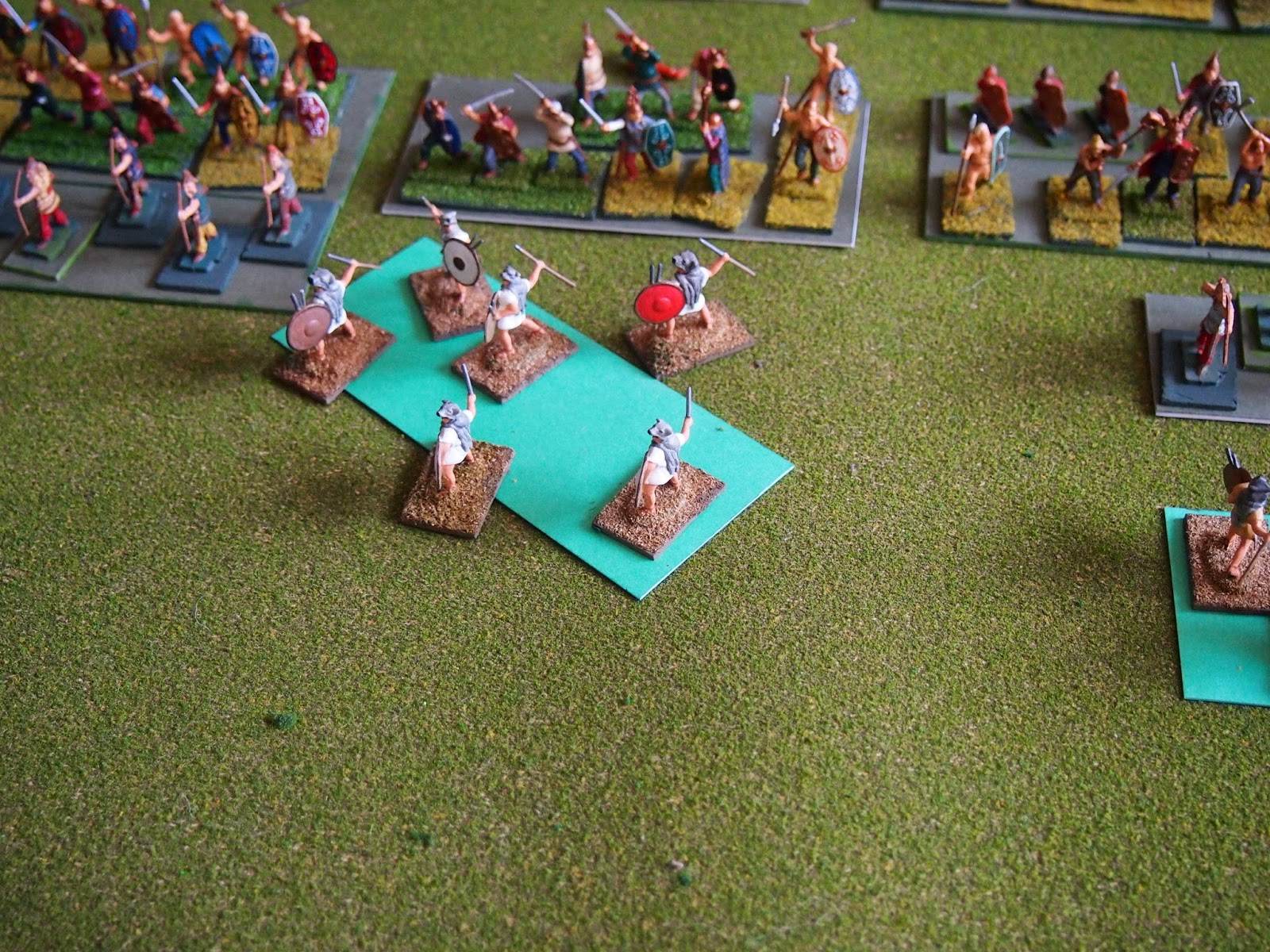 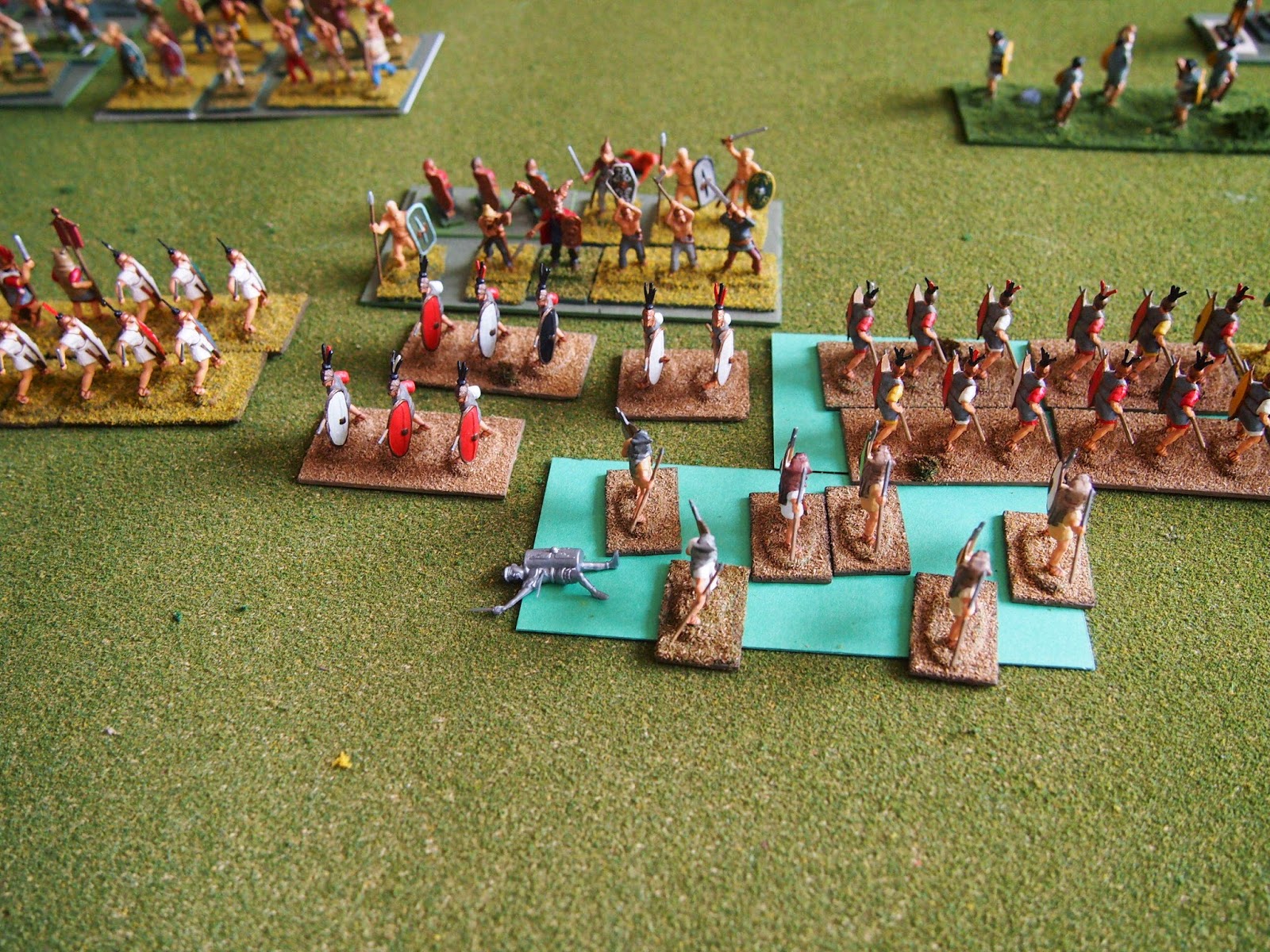 and rolling on to Longinus' legions. 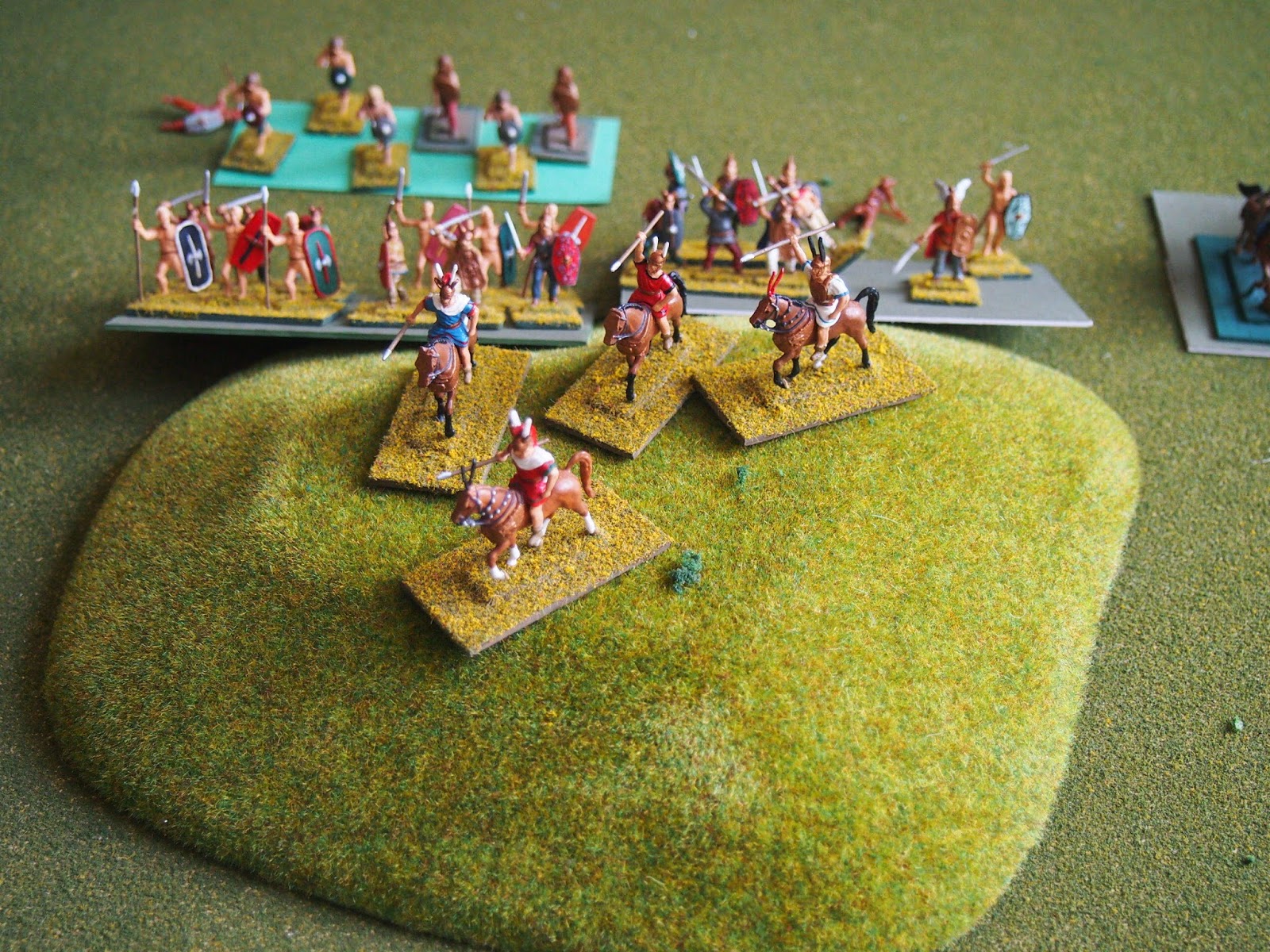 On the right the Italian cavalry were swept aside. 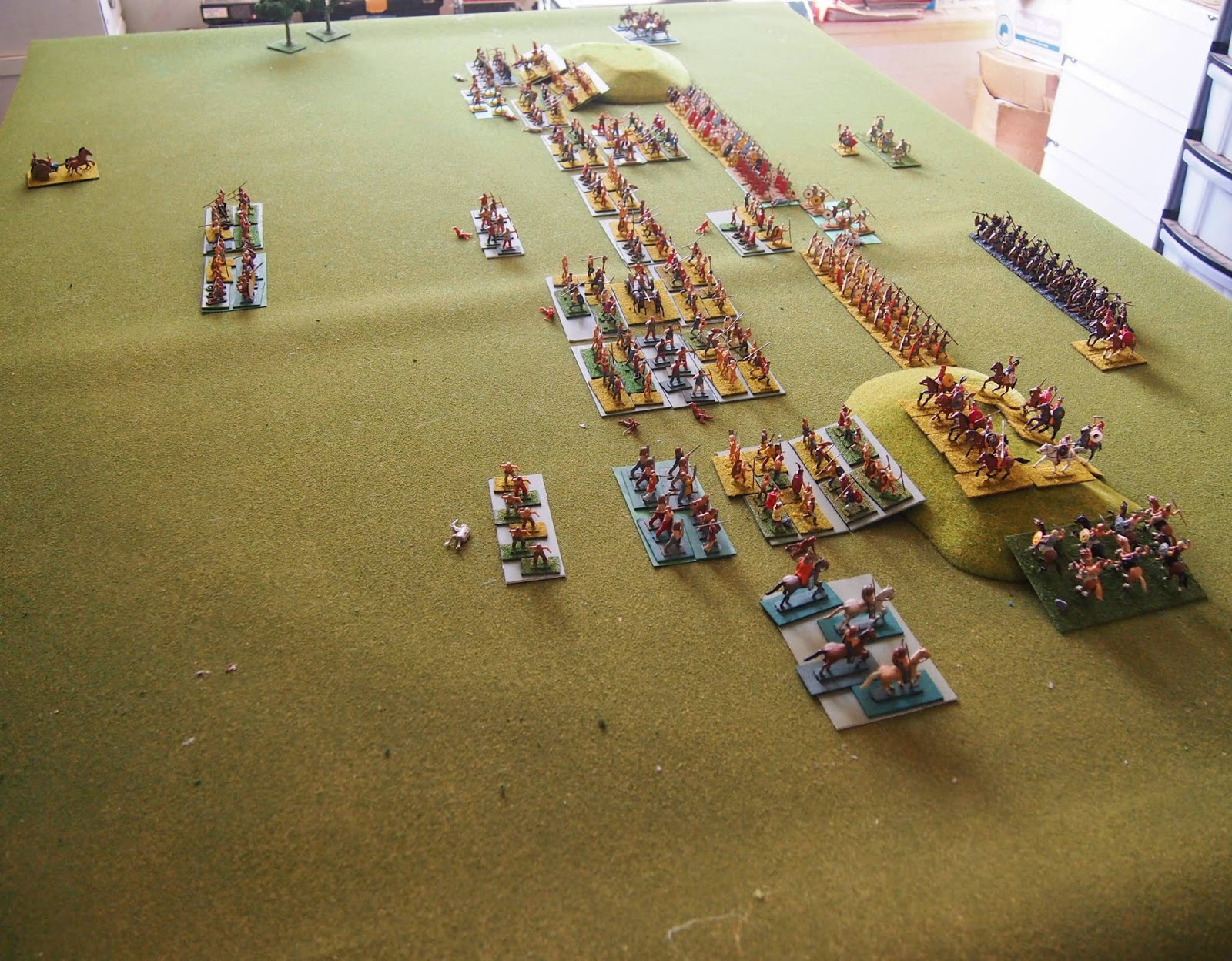 Views of the battlefield as the pressure mounts on the Roman line. 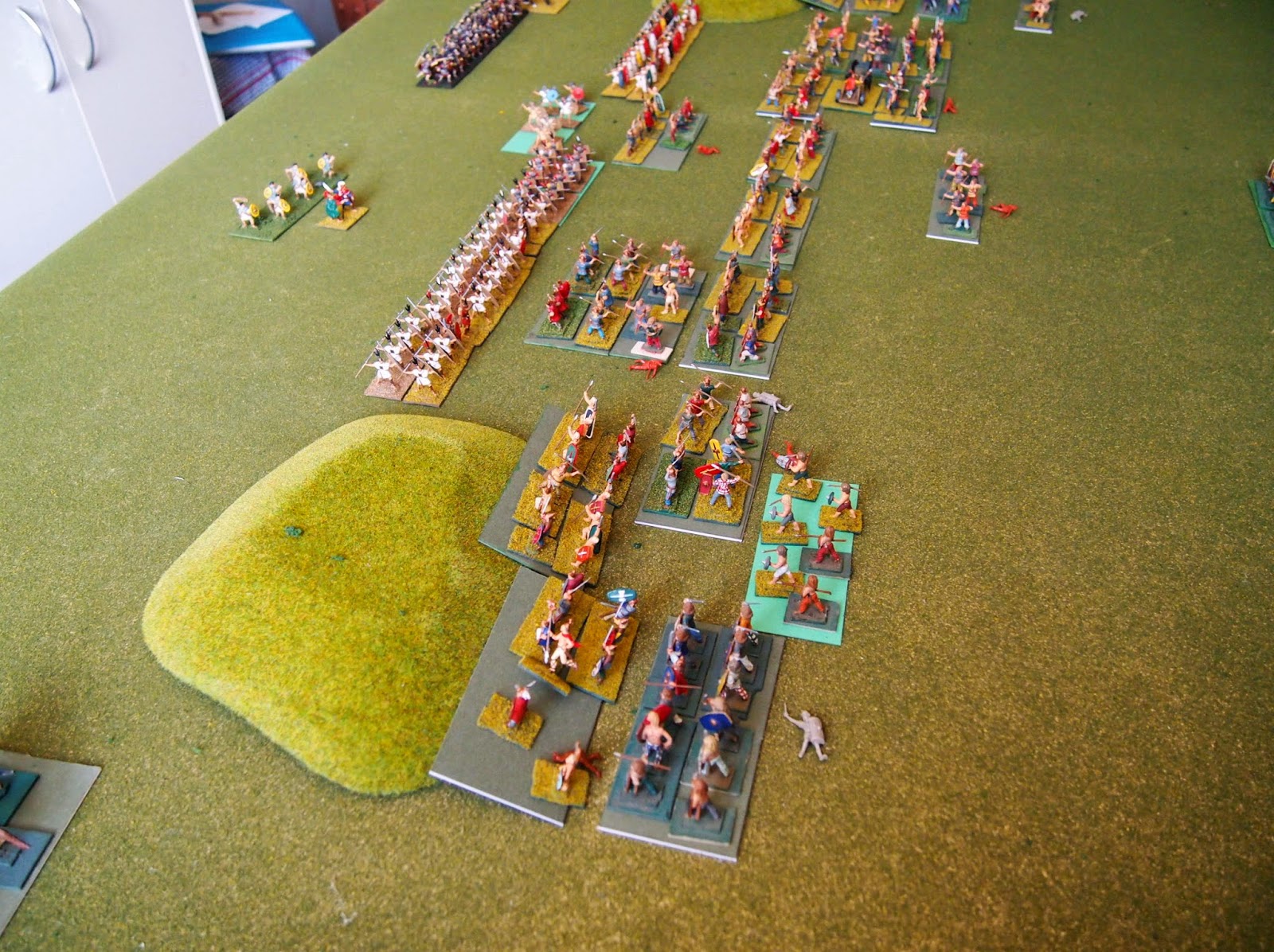 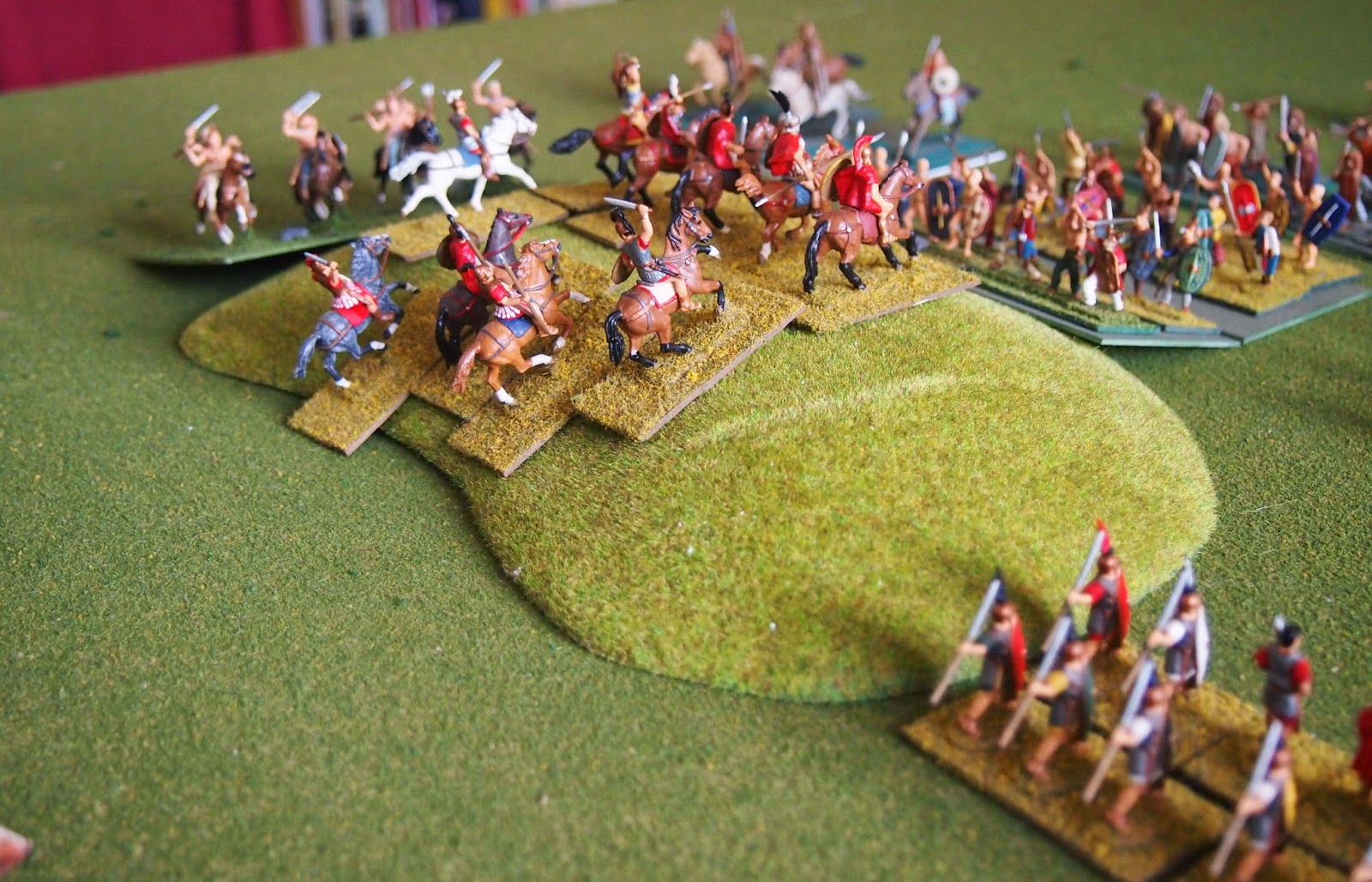 The Roman cavalry were swept aside as easily as their Italian colleagues-in-arms. 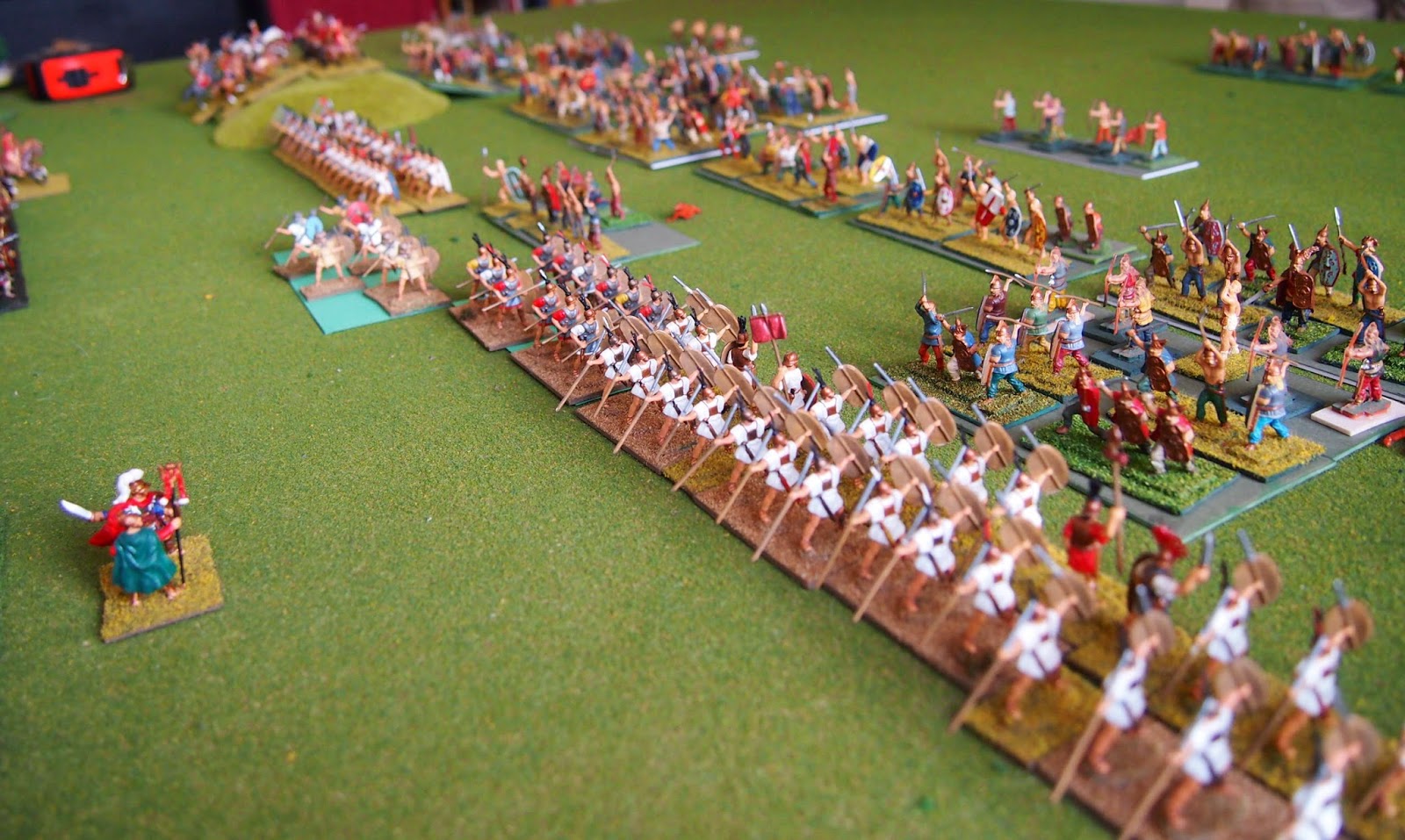 The Cimbrian warbands attacked in force along the line, 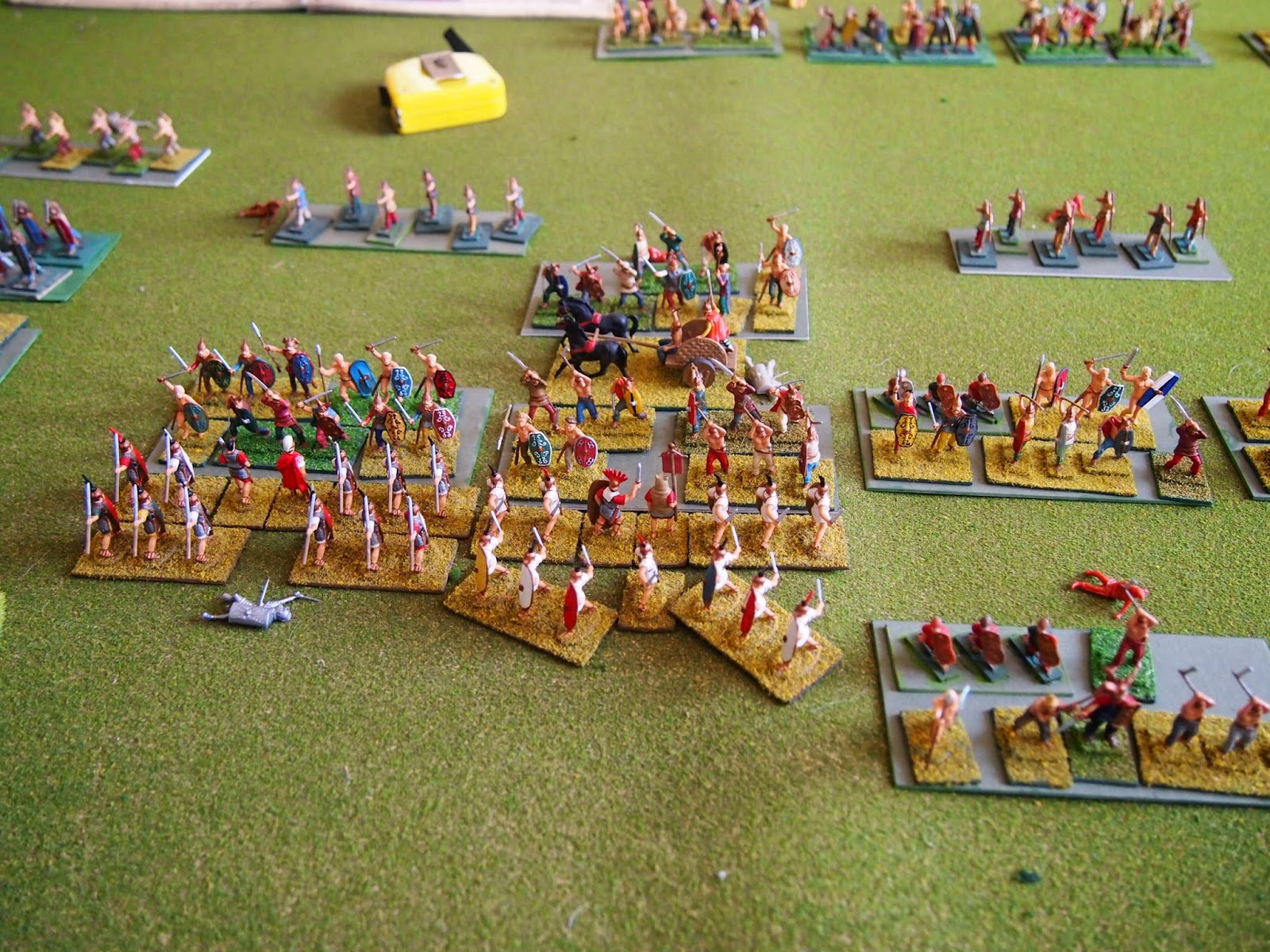 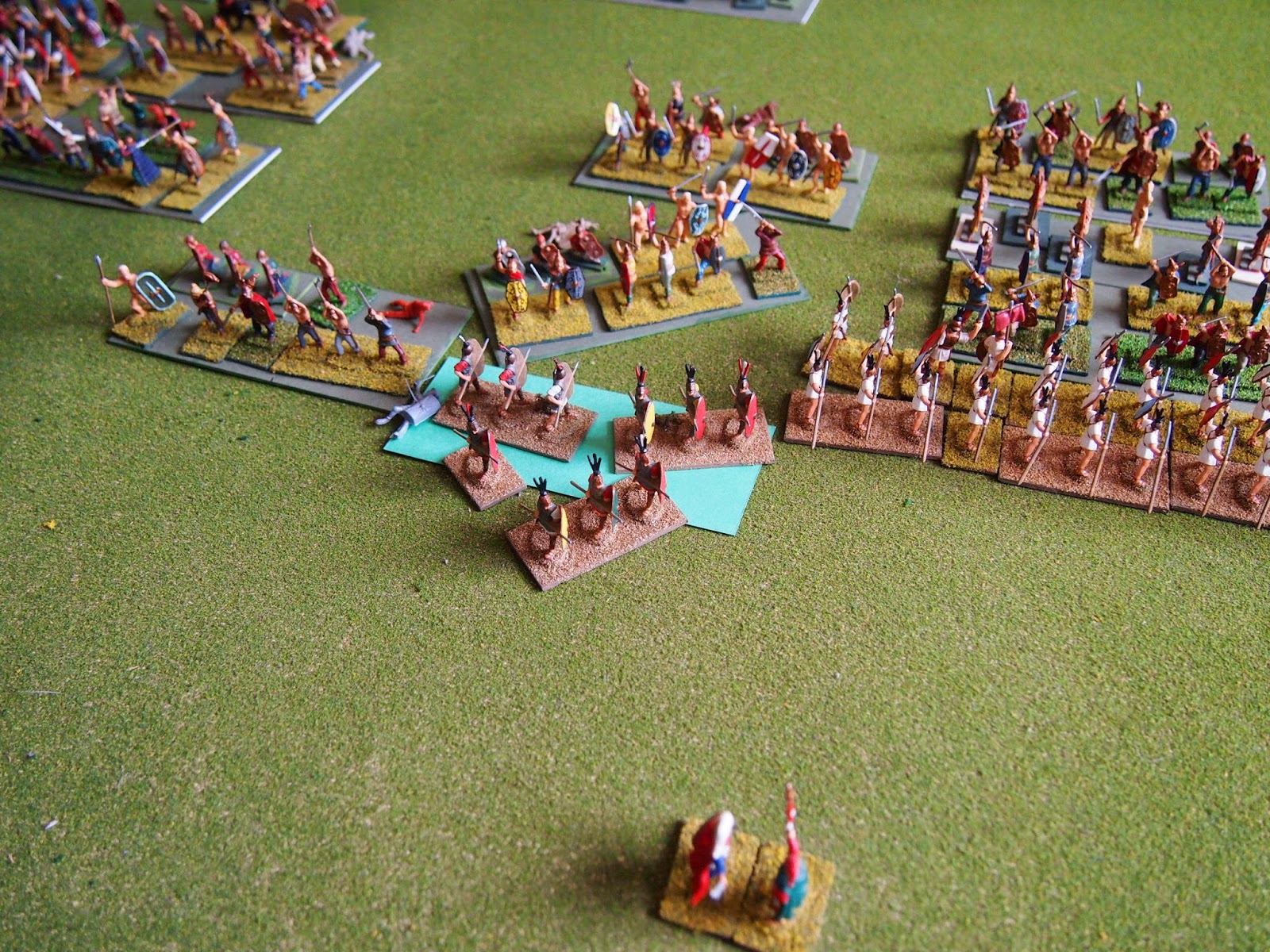 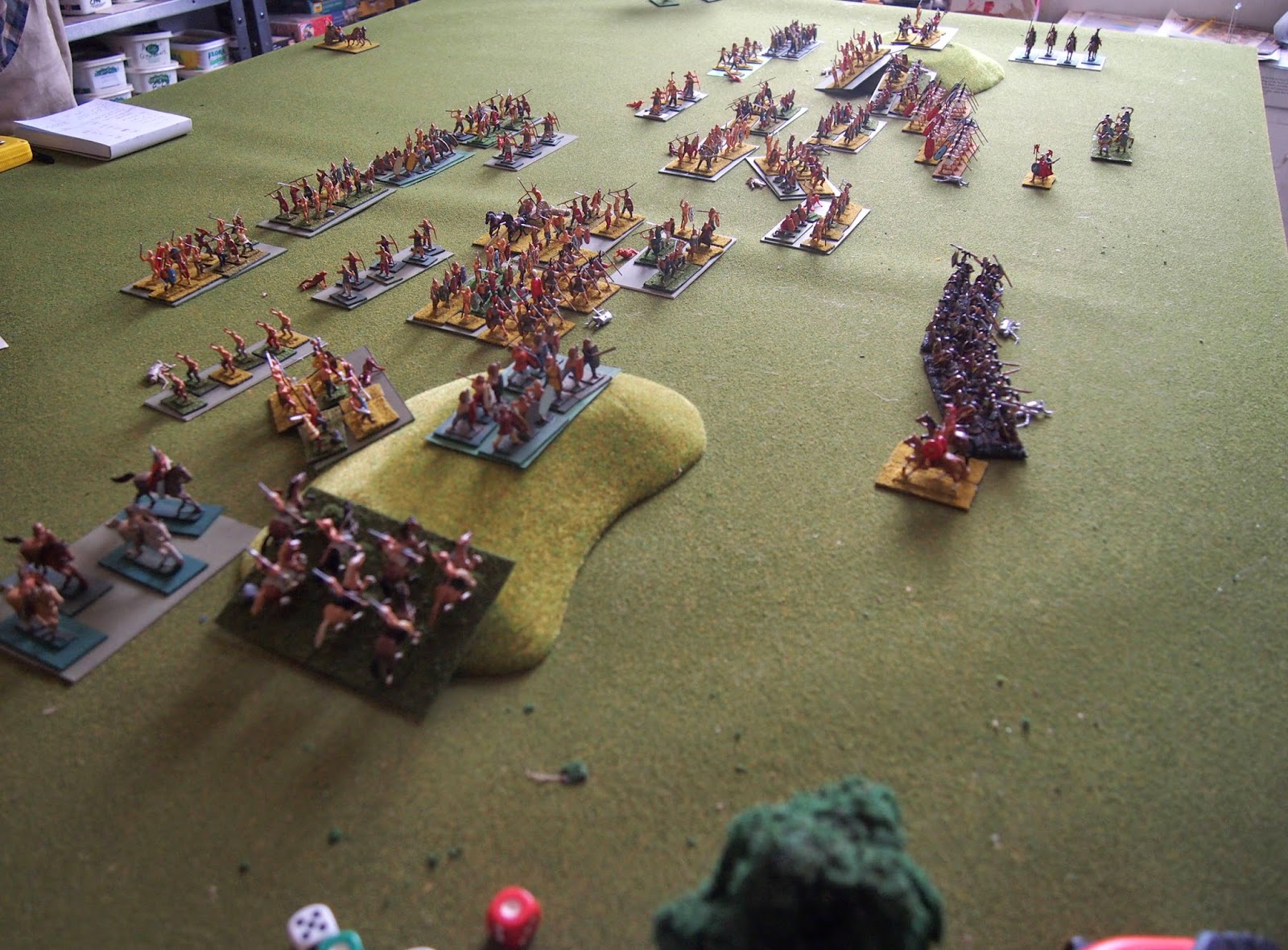 So that after only five turns both Roman commands had broken, the survivors retreating from the field, 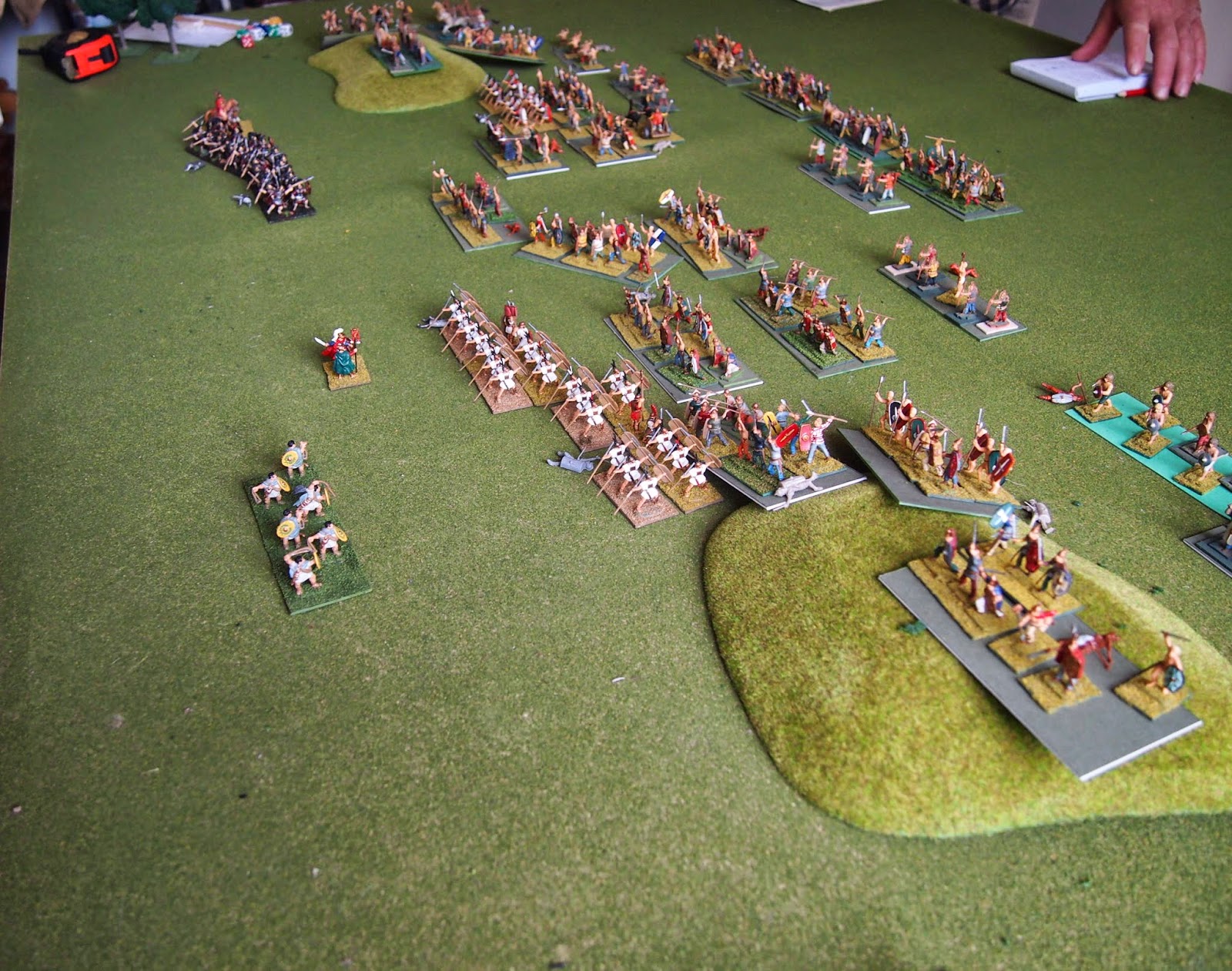 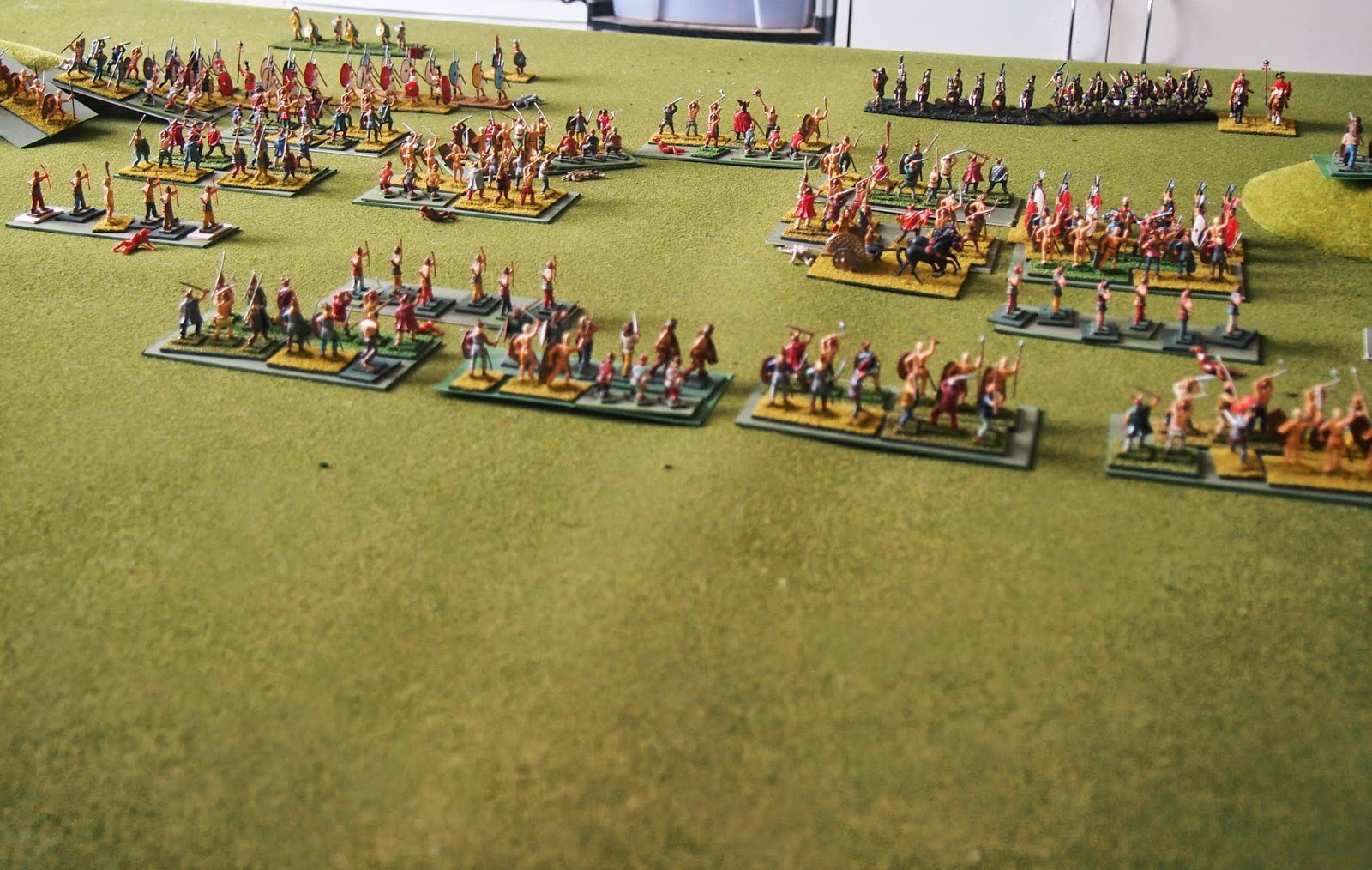 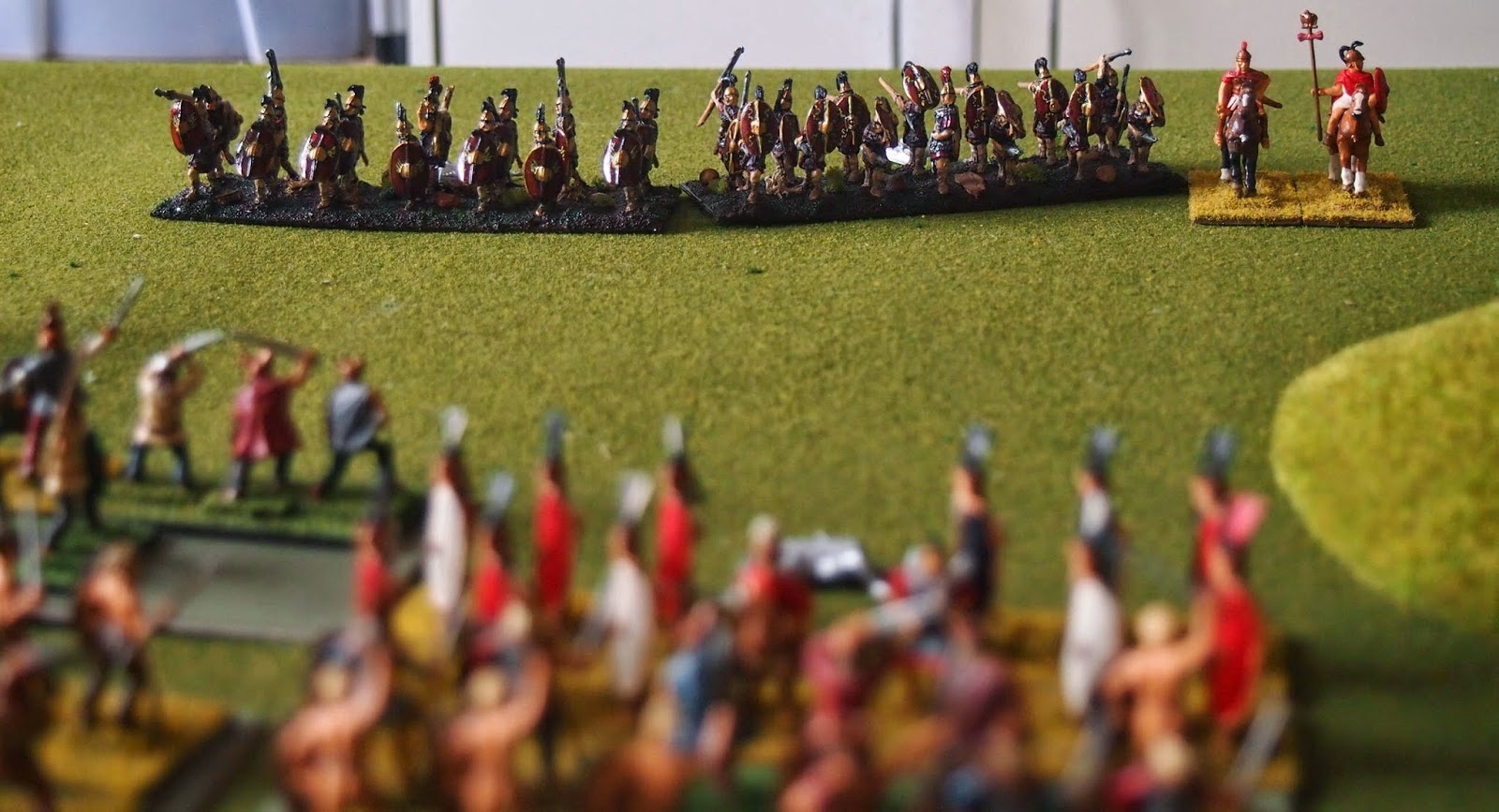 Covered by Silanus' own Legio II, which he'd kept in reserve.

War Against the Cimbri and Teutones http://www.swartzentrover.com/cotor/bible/timelines/Rome/Cimbri.htm