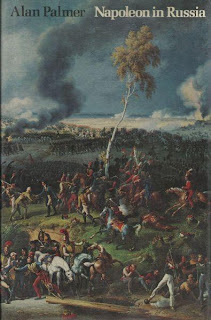 In this bicentennial of 1812 I have focussed much of my recent reading, surprise, surprise (!) on books about the Russian campaign. This has been particularly useful as we plan for our big Borodino bash in September and for the games based on other battles from 1812 that I hope we will do after that.
I began by re-reading this old favourite, which I first read about 20 years ago. I remembered it as an engaging read that challenge some of the mythology about the campaign. I particularly remember that Palmer discussed the burning of Moscow in some depth, trying to conclude just who was responsible.
My recollection of the book was supported from the first page. Palmer tells the story of the Russian campaign in lucid and elegant prose and the book is an enjoyable and interesting read. I was impressed by his critical, yet objective approach. There is little judgmental language or value-laden statements, merely a presentation of information and quotes from some of the key actors actors to inform the reader—and tell a ripping yarn at the same time.
Unlike many books about the Russian Campaign, this tome focusses more attention on the first half of the campaign (up to and including the capture of Moscow and the great fire). The first ten chapters cover this part of the epic story, with one devoted to Maloyaroslavets, three to the retreat and a concluding chapter (‘Laurels and Legends’).
Palmer presents a story of mistakes and lost opportunities, of uncharacteristic inaction and indecision by Napoleon, of a slow-moving attack and a wily, increasingly co-ordinated and determined retreat and defence.
The pursuit of the retreating Russian armies reads like an exciting mystery-adventure. The mistakes made by Napoleon and his subordinates, especially Jérôme, and the missed opportunities at Drissa, Vitebsk and Smolensk are clearly evident to us in hindsight, and from the comfort of an armchair! Palmer does not merely critique the French, illustrating that both armies lacked a clear plan of campaign, were racked by squabbles amongst senior commanders, lack of trust, a lack of clear information, slow rates of march and the hardships of the advance/retreat, particularly the impact of the rain and heat. A key turning point was the ‘need’ (and demand) for a ‘true’ Russian commander to unite the armies and build on the patriotism, which lead Alexander to reluctantly appoint Kutuzov as C-in-C.
The chapter on the Battle of Borodino describes the main phases of that terrible encounter. It includes an excellent, relatively simple map with the main features shown clearly. As with the rest of the book, Palmer’s vivid account highlights the intensity of the struggle. He uses the battle to develop his thesis that it was an example of a change in Napoleonic warfare and a move to artillery dominance that would be so evident in WWI. I struggled with this selective use of evidence to try to develop a general thesis (not to mention that, like the European military of the mid-19th C, he omits to note the significance of the ACW), but it did not detract from the value of the book and the narrative of the battle.
As is my all-too-common beef when reading and reviewing these books, the maps do not adequately support the text. While, as indicated by my praise of the one of the Battle of Borodino, those that are provided are clear and with reasonable detail (Campaign of 1812 (endpapers), Crossing the Niemen, Battle of Borodino, Burning of Moscow, Leaving Moscow and Crossing the Berezina), they are insufficient to follow the campaign in detail.
Palmer’s book features detailed accounts of aspects of the campaign that are too often glossed over by other authors. The meeting of the Russian commanders at Fili leading to the crucial decision to retreat beyond Moscow; the burning of Moscow (about which he presents compelling evidence that Rostopchin was the perpetrator); events during the French occupation and Napoleon's attempts to deal with Alexander; the battle of Maloyaroslavets (highlighting the performance of Dokhturov, Raevski and Eugène—which lead me to muse, “what if Eugène had been at Waterloo rather than Jerôme?!”) and dramatic battles around the crossing of the Berezina. There are numerous insights and interesting observations in these sections and chapters. For example, Napoleon’s decision to leave the army once safely in winter quarters, which he made early in the retreat, the losses in the retreat prior to snow fall, how half-starved French troops fought well at Viasma, but after battle part of Davout’s corps broke and ran to protection with Ney’s. These all add to the value of this book and, given that it was published in 1967, represent one of the first attempts—in popular writing in English—to dispel the myths that had been built around the campaign since 1812.
So, my verdict has not changed much in 20 years. I still think it is an engaging read. I was particularly impressed that, like all good story-tellers, the author’s view-point is not important—in fact we are left unsure as to his point of view—the book is about the story, the available evidence and is an attempt to present a ‘factual’ account. Another one that is highly recommended.
Posted by James Fisher at 02:50