A valuable edition to the library, with caveats

Book Review: The Peninsular War - Wellington's Battlefields Revisited by Ian Fletcher
(Images courtesy of the publishers. Please do not reproduce without first seeking permission)
In a break from my 1812, Russian Campaign reading theme for this year, I read this book by Ian Fletcher in which he presents photographs of some of the battlefields of the Peninsular War. I have not seen Fletcher’s original book on the subject “Fields of Fire”. This book is a ‘revisiting’, some eight years later, enabling him to present a photographic record of the battlefields of the Peninsular War and to show how some features have changed or nearly disappeared. 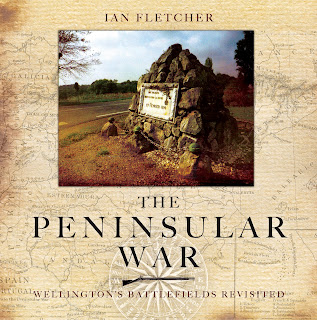 While not the intention, this is a book in two parts; ‘The Peninsular War’ and ‘Wellington’s Battlefields Revisited’. The former is covered by the text, while the latter is provided by the pictures. Sadly, there is a disconnect between the two. As the inside sleeve summary of the book states “this book is not intended to be any groundbreaking account of the Peninsular War but simply shows Wellington’s battlefields in full colour...”. It is a shame that the author did not leave it at that.


The photographs in this book are a visual feast. There are 123 photographs, all beautifully reproduced in full colour, featuring key aspects of the Peninsular War battlefields at which British forces participated, from Roliça to Toulouse. The photographs range from views across a battlefield, to key features of a section of a battlefield, to buildings and bridges (often now in ruins), to commemorative plaques and grave sites. One picture, described as “Three planes from the Spanish Air Force fly over the battlefield memorial on the Greater Arapil at Salamanca”, is a particularly impressive, poignant shot. All of the photos are clear and have been taken at the same time of year as the original battle, so that we have, for example, snow-covered terrain in the photos from the Coruña campaign.


The photographs range in size from less than a ninth of a page (for a two pages of photos of gravestones at Toulouse) to full page views of a battlefield, such as those of Salamanca. The majority of the photos are about a third of a page or larger. The full-page images allow the reader to look over them in detail, identifying key aspects of the terrain. The photographs are a great resource for wargamers to use when designing table-top terrain, but are also of great interest to any ‘student’ of the period. They are especially of benefit to those of us who, at around 15 000 km from Spain and Portugal, are unable to easily ‘flit’ over to the Iberian Peninsula to look over the landscape!


While the photographs are marvellous, the text is of less value. It begins with a four-page biography of Wellington and then provides a brief summary of the Peninsular War, from a British perspective. As stated in the inside sleeve, Ian Fletcher’s description of the war is not a “groundbreaking account”, but rather the standard, accepted Anglo-version, drawing principally on sources such as Oman. The writing improves, becoming more objective and describing events in greater detail as the book goes on, but there is not scope for it to be anything more than a ‘potted history’. While the photos show locations mentioned in the text, the potential for complementarity is not exploited to the full. I would have much preferred a brief history of the campaign—for those new to the period—with the majority of the text describing each battlefield in some detail and, of course, some accompanying maps.


I am going to sound like a broken record to regular readers of my reviews, but... where are the maps?! An overall map of the Peninsula, with more detailed maps of some of the key stages of the war and further maps of each of the battlefields featured in the photographs, indicating where each photograph was taken, would have been ideal. So, if you are reading Mr Fletcher, that is my wish-list for the third edition!


The book itself has all the fine publication qualities that we, spoilt as we are, have come to expect as ‘standard’. The hard-back binding, high quality, gloss paper, beautifully reproduced pictures and pleasing font (presented as clear white type on a black background in this case) all lend to a lovely book to hold and to read.


Leaving aside the text, this is a fine picture book and one that I know that we will use frequently—commencing with our game of Salamanca later this year—to provide tips regarding terrain. A valuable edition to the library; with some caveats.
Posted by James Fisher at 23:17