Great text, shame about the maps

This book combines quotes from various participants in the 1812 campaign, both civil and military, to provide a ‘Russian’ perspective of the campaign. The sources are principally Russian, but also include Poles, French, British and American. 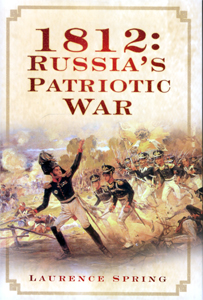 The author’s text is skilfully interspersed with quotes to produce a smooth flow and an engaging read. The quotes are not the usual one or two liners either, but several lines and often even several paragraphs long; thus painting a word picture of what people actually experienced, thought and observed. This combination of the author’s text and quotes works well and, in the case of the chapter about Borodino, produces an account that is vivid and harrowing. One can almost smell the powder and feel the intensity of that dramatic, terrible struggle.

“The maps, why is it always the maps?” (apologies to Rod Steiger and H.A.L. Craig for the mis-quote).

The appendices (Russian Army—June 1812, Opolychenye Forces at Borodino, French Losses (a table listing them day by day) and Russian Army—December 1812) are an interesting and useful addition to the body of the book. The bibliography provides evidence of a range of sources consulted and leads for the serious student to follow-up.

The publication quality, as with most books nowadays, is excellent. My copy of the book is hardcover on relatively thick stock. The print is an easily legible, rounded font that is pleasing to the eye. The central plates—paintings of officers, battle scenes, cartoons and famous incidents—are all reproduced clearly in black white.

The combination of clear text, many extensive quotes and the clear plates make for a fine book; it’s just a shame about the maps.
Posted by James Fisher at 19:39